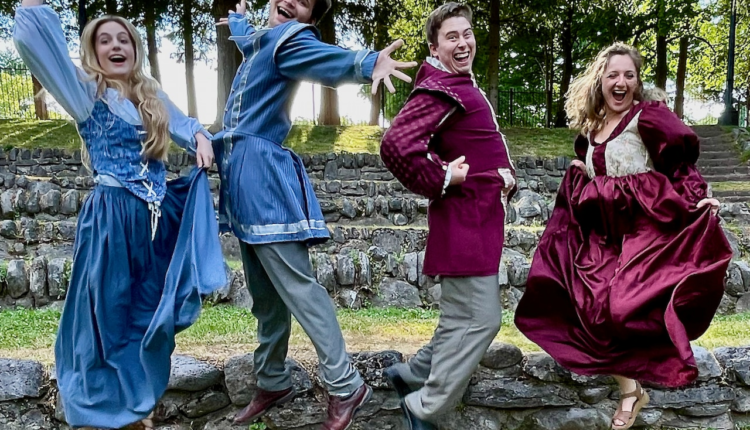 Syracuse, NY— Syracuse Shakespeare-in-the-Park continues its 20th season anniversary celebration with the classic “A Midsummer Night’s Dream” on the main stage at Thornden Park Amphitheater during the first two weekends of August. Shows are Friday and Saturday, Aug. 5, 6, 12 and 13 at 5:30 pm and Sunday, Aug. 7 and 14 at 2 pm

There are three different ticket options – free, donation, and premium. Audiences are encouraged to support the arts, the organization, and the actors by selecting $10 or more donations tickets online. Premium tickets, limited to fourteen per show, are available for only $30. They include front-row lawn chairs, $15 of Beer Belly Deli food you select, Gannon’s ice cream, a cold bottle of water and a color playbill. Food, snacks, and beverages are also sold at the Thornden Park Bulldogs’ concession stand for everyone. Tickets are available online at bit.ly/3OmvoFx.

“A Midsummer Night’s Dream,” one of Shakespeare’s most popular and most performed comedies, is a hilarious love story in a magical forest. It is a story of order and disorder, reality and fantasy that will charm audiences of all ages. Twists and turns keep the characters spinning and the audience guessing. When a love potion gets mixed up and a troupe of earnest, bumbling workers-turned-actors get involved. We find Puck in the center of the mayhem, sometimes at the direction of Oberon, the Fairy King, and sometimes Puck just making mischief. You and your whole family will delight in the slapstick, comedy and magic right up until the finale of a “play within a play” presented by the mechanicals.

SSITP presents authentic Elizabethan theater to Central New York outdoors in the picturesque Thornden Park Amphitheatre. Syracuse City Ballet returns to perform in the show. Guitarist Peter Allen provides music pre-show, during the play and at intermission. Period costumes by Paris Freeman, along with the late Barbara Toman’s nineteen seasons of originals, help guide the audience on a magical journey through the Athenian forest in this wonderfully dreamy story.

Victor Peña trial: Peña to take the stand, ahead of closing arguments in rape and kidnapping trial on Monday