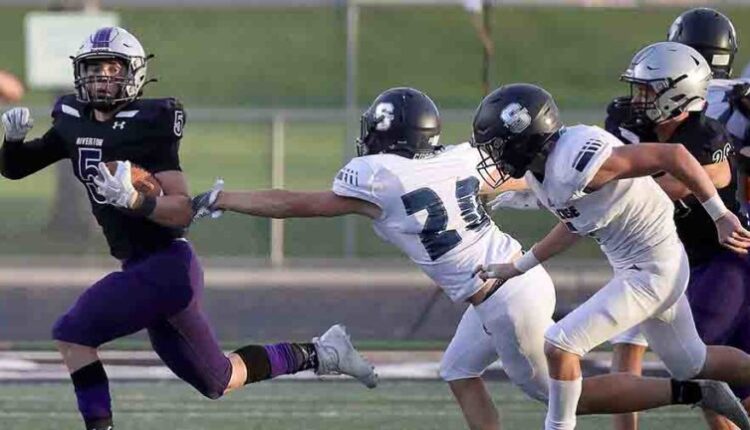 SALT LAKE CITY – The high school football season has already started with a big upset as Riverton takes down No. 8 Syracuse 27-25 on Friday night.

In a tightly contested game, Syracuse had a 19-13 halftime lead over Riverton. The Silverwolves trailed entering the fourth quarter but a 79-yard TD pass from Jake Meyers to Sam Woolley was the difference. Meyers’ two touchdowns went to Woolley. For the Titans, Jake Hopkins had two touchdowns, finding Noah Yeates and Jake Metcalfe.

Here are all of the results in the 6A classification from the first week of the 2022 high school football season.

Isaac Wilson made his debut as the full-time starting quarterback at Corner Canyon and didn’t disappoint by throwing six touchdown passes, two to Tate Kjar and one each to Drew Patterson, Quinn Hale, Blake Ames, and Trevor Ogden.

After a lightning delay to start the game, Skyridge got things going with 17 points in the first quarter. They were able to take a 24-7 lead at the half. Things went sideways for Fremont in the second half as they were held scoreless and allowed 28 points to Skyridge. McCae Hillstead racked up five touchdowns, three passing and one rushing. He found Jack Burke, La’akea Kalama and Josh Davis for scores. Collin Sheffield and Tate Walker each ran in a score for the Falcons.

The game started with each team scoring a touchdown in the first 30 seconds. An 82-yard kick return for a touchdown would be all that Murray put on the scoreboard. Taylorsville scored another first quarter touchdown before finishing the game with two more scores. Cole Kramer had three passing touchdowns and one on the ground. He threw TD passes to Phienix Miera, Karsan Kirkman and Tyler Kirkman.

Havea Fotu and Carson Sudbury were the stars for Bingham in the win. The Bingham duo ran in three touchdowns each to lift the Miners to victory. Aidan Carter threw a TD pass to Crue Coggins for Weber and Michal Gussie had a rushing touchdown.

Cedar Valley had a comfortable 28-7 lead entering the fourth quarter before Copper Hills scored 28 points in the final period but gave up a score, falling short in the massive comeback. For Cedar Valley, Cooper Thomson threw three touchdown passes, two to KJ Fisher and one to Tryston Johnson. Clayson Jakins added two rushing TD’s for the Aviators. Nate Kitchen ran in two scores for Copper Hills in the loss.

It was all American Fork in Week 1. Champion Edwards, Lincoln Jackson and Cale Burrows each threw touchdown passes. The trio connected with Trey Roberts twice and once to Jett Nelson and Jacob Nelson. Jacob Eardley added a rushing score.

The Phoenix started the game with two unanswered touchdowns by Boston Reinhold and Seth Warner finding Adam Stucki. Pleasant Grove answered with a rushing TD by Nic Staffieri. Reinhold extended the Farmington lead with his second TD. Late in the fourth, Staffieri found Cannon Hale for a score but PG couldn’t complete the comeback.

The Thunder picked up the season-opening win after a strong first half, outscoring the Wolverines 24-14. Aiden Bayless had two touchdown passes and two rushing TD’s. Nathan Parke scored one touchdown through the air and two on the ground for Hunter.

It was all West on the road as they pitched the shutout. Isaiah SueSue threw three touchdowns, finding Winston Hola, Viliata Tua’one and Kingsley Brown. Sesi Vailahi and SueSue each ran in a touchdown for the Panthers.