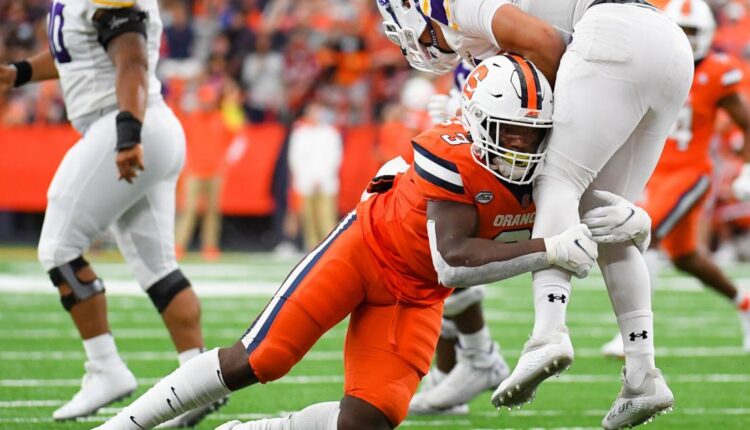 SYRACUSE — The chance to elevate Syracuse University football and his personal NFL draft stock combined to lead Mikel Jones back to captain the Orange again for the upcoming season.

The junior linebacker tested the pro waters after a breakthrough campaign that placed him on the All-Atlantic Coast Conference First Team but opted to return to SU to better himself and the program.

Jones has already been named a team captain for the second straight year and has been guiding the unit throughout training camp, which just wrapped up the second week of practices leading into the season opener Sept. 3 against Louisville in the JMA Wireless Dome.

“I put in my grade and a lot of people were telling me it was in my best interest to come back,” Jones said after Friday’s practice.

“As much as I wanted to go, having the opportunity, I just chose to rely on my faith and come back, play one more year with the guys and try — not try — but get this bowl game and have a way better season than I’ve ever had at Syracuse.”

Jones is one of several key veterans aiming for their first postseason appearance with SU seeking its first bowl berth since 2018.

He was named one of three captains by head coach Dino Babers ahead of the first practice, along with offensive tackle Matthew Bergeron and kicker Andre Szmyt. They were voted on by teammates in a break from tradition for Babers, who appointed weekly captains until voting on permanent leaders midway through the season.

Three additional captains will be voted in before the regular season kicks off.

“It’s one of those ‘it,’ things,” Babers said of Jones’ leadership qualities. “The first time you meet him it’s like, ‘meh, OK,’ but then you see him on the field, and you see him interact with other people. … Mikel has that ‘it,’ I don’t know what it is, I can’t tell you what it is, but he’s got it.”

Jones described the conversations as “excitement all around,” when he shared with coaches and teammates his intentions to return for at least one more season. His roommate, All-ACC cornerback Garrett Williams, was among the first to know and was in frequent contact with Jones during his process.

Jones led SU with 110 tackles last year, including 13 for loss, and led the ACC with 60 solo tackles.

He was also voted a captain by teammates in-season last year after already taking on the role of emotional leader through the ups and downs of a 5-7 campaign.

“He’s so personable with everybody,” Williams said. “He can talk to a starter or a walk-on in the same way and everybody is going to give him the same respect. He’s just an easy guy to rally around, and I think that’s why everyone on the team loves him.”

Jones enters the season on watch lists for the Bednarik Award and Bronco Nagurski Trophy, each presented to the most outstanding defensive player, and the Butkus Award for the top linebacker.

The 6-foot-1 and 224-pound native of Miami, Fla., pointed to his strength and speed when asked what he intends to focus on improving in his game for NFL scouts.

Jones described his thought process like creating a player on a video game and wanting to juice every attribute to the maximum level.

“There is always football to be learned, the game is always changing,” Jones said. “The basic thing is you can always get faster, always get stronger, so just the basic elements.”

Jones and Garrett Williams, a strong candidate for one of the remaining captain vacancies, each spoke of the importance of empowering younger teammates to take charge in the same spirited demeanor they have displayed over the last two seasons.

“It’s almost like passing the torch, getting the younger guys to be leaders right now, not later, like right now, so we have multiple leaders on the field, so when I do get my chance to go the next level there’s no type of drop off,” Jones said. “I want to see Syracuse do great after I leave.”

Carter was hurt early in Tuesday’s practice and taken to the hospital by ambulance. Babers said that was a precautionary move in his weekly press appearance later that day, stating that he spoke to Carter on the field, and relayed that he had feeling in all limbs.

Carter was back on the field in street clothes the next day watching the defense work, and on Friday, sported a green jersey typically designated for players cleared for partial participation.

Babers is likely to update Carter’s status in his upcoming media appearance next Tuesday.

“That’s a super tough dude, he’s doing good,” Jones said of Carter. “He should be back soon before the season.”

Carter has started 18 of 19 career games at SU and was named a Freshman All-American in 2020.

Babers noted that Caleb Okechukwu and Terry Lockett have taken command of the defensive line, which needs to replace all three starters and add depth after losing four super-senior contributors from last season.

Okechukwu returns the most experience as a fifth-year player who has appeared in all 23 games over the last two seasons. Lockett made 12 tackles and two sacks in 11 games as a true freshman last season.

Jones also singled out true freshman Denis Jaquez Jr. as a DL standout through the first two weeks of camp, stating that he has asked the captain to review the playbook together and appears eager to learn while making plays in practice.

Syracuse fullback Chris Elmore was named to the annual “Freak List,” by Bruce Feldman of The Athletic, which recognizes the top 100 athletic phenoms in college football.

Feldman credited Elmore’s versatility — he has also played offensive line, defensive line, and tight end in his five previous seasons — and his impressive weight room numbers of 410 pounds on bench press, 620 on squats, and hang-cleaning 310.