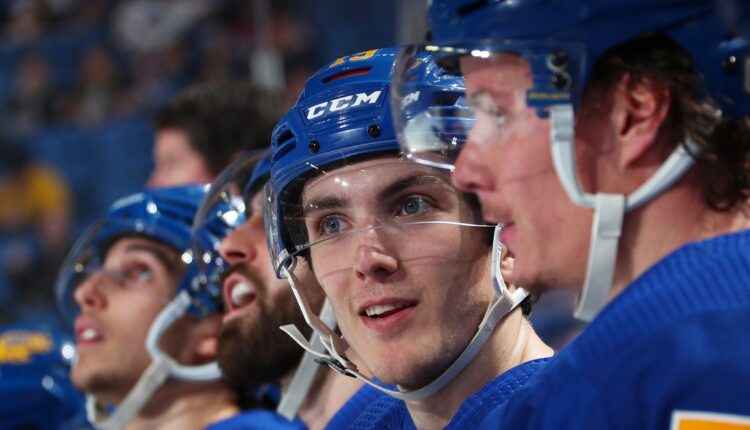 On the ice, Peyton Krebs’ skill visibly sets him apart from others. What isn’t perhaps as visible to the naked eye, however, is his maturity and sense of responsibility.

Cancer, of course, came to the Buffalo Sabers organization as a part of the Jack Eichel trade. When he spoke earlier this summer at the team’s development camp, his thoughts about being traded at a fairly young age were particularly wise and contemplative.

“At a young age, you think you’re going to be with a certain organization for your whole life,” he said. “A lot of these kids that got drafted this past week probably think the same thing. You don’t know what can happen.”

“For me, it’s just, stick to my morals, stick to my values,” he added. “The NHL is a league. It’s a business, and I want to be a part of it. I’ve got to work my brains out every day, no matter where I am. Stay humble, have fun. It’s a business to them, but you’re living the dream, so you can’t complain too much.”

During the season, he’s one of the younger players on the ice and in the locker room for the Sabers. During development camp, however, he skewed toward the other side of things, as one of a handful of players with NHL experience, which he knew was valuable to the other prospects.

Krebs was unable to participate in his first NHL development camp, as he was recovering from a cut Achilles at the time.

“Not all of these guys are going to play in the NHL,” he said. “If I can help one or two make their dreams come to reality, and give them little tips to allow them to maybe get that next jump that they need, that’s huge for our organization & what we need to do to build the franchise.”

He spoke it plainly and simply, but I honestly don’t know that I’ve ever heard another player acknowledge that fact. There were a number of players at development camp, but the simple realities are: many of them, most of them, will never play in the NHL, and many of them will be traded at some point. It’s the facts of life, but to hear cancer speak honestly about them, and his experiences being traded at a fairly young age, it was refreshing and authentic.

Of course, Krebs also said he’s trying to get better, too, and used the team’s week-long development camp to get some extra ice, have fun and keep himself sharp.

He also spoke about his time in the WHL, where he played with Matthew Savoie, and how he and his team persevered through some bottom-of-the-standings seasons – and how he can take those lessons into Buffalo.

“My first year [in the WHL], we won 12 games out of 70,” he said. “It was a tough start… it was just about trying to get better by the end of the season. The next year, we took another step, and the next year, we’re a playoff team. I want to try to help do that here in Buffalo.”

Krebs served as captain of the Kootenay Ice/Winnipeg Ice from 2018 until 2021. His leadership skills – and all of his other skills – clearly shine through even to this day, and he appears poised for another solid season in Buffalo.

There’s a reason that earlier this year, Tage Thompson called Krebs “one of the smartest hockey players I’ve seen,” noting how well he reads the game, his high hockey sense and great passing ability. Thompson said Krebs truly makes everyone around him better.

Victor Olofsson, too, noted Krebs’ maturity and how easy it is to forget he’s only 21. When he eventually joined the AHL’s Rochester Americans for their playoff push, his dominance on the ice was impressive. Regardless of where he plays, he brings an incredible amount of value to the team and should be a key piece of the Sabers organization for years to come.