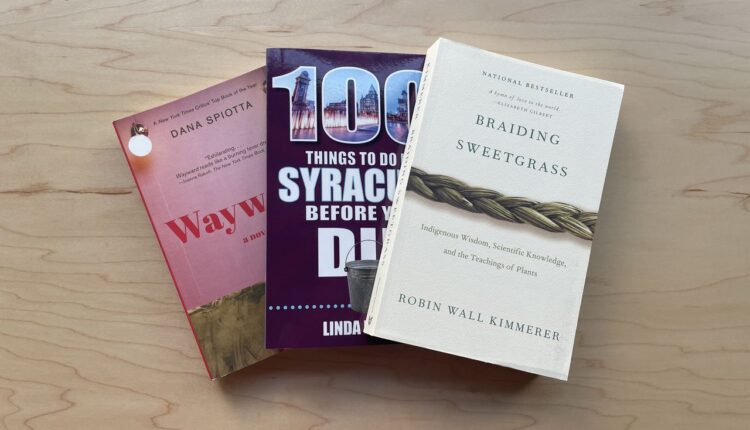 Just inside the front door at Syracuse’s newest bookstore is a sleek black shelf unlike any other in the store. It’s filled to the brim with titles from local authors.

The shelf is part of what’s solidifying the reputation of Parthenon Books—the first downtown bookstore in 30 years—as a local bookstore for local people.

Eden Majewski, a lead bookseller and social media manager, researches and selects books by local authors for Parthenon. One of the reasons that she chose to work at Parthenon is because she wanted to be a part of a community-oriented bookstore that acts more like a building block.

“Parthenon is huge about being a part of the downtown Syracuse community,” said Majewski. “We love stocking local authors, local artists, all of the murals are done by local artists. All of the art on the walls are local artists. We have a local coffee roaster, local bakery. It’s like a really big part of our identity is having local people and their skills and their talents involved in the store. Probably the biggest part of our identity, outside of books.”

Since opening their doors on June 25, Parthenon has received 40 to 50 book submissions, with half of those being submitted during their first week. At the moment, there are currently 58 books by local authors on the shelves, the latest being Papa, Daddy, and Riley by Seamus Kirst. The latest children’s book of Parthenon’s collection, Papa, Daddy, and Riley is a story that’s main message is that not all families look the same.

“Yep, I work with all the local authors,” said Majewski. “I do the reviewing. I review their submissions, talk to them about what they want to do with the store, kind of decide what we can stock and what kind of relationship we can have going forward – is probably one of the most fun parts.”

Local author Dana Spiotta has already held a book signing and reading at Parthenon for Wayward, her novel about a 52-year-old woman buys a house on a whim in Syracuse and comes to terms with aging as a woman in America. Parthenon is hoping to collaborate more with local authors moving forward so that they can really interact with the community.

To inquire about selling their book or participate in a book signing, local authors can fill out a submission form that’s available on the Parthenon website.

If a book submission is accepted, Parthenon will then take a certain amount of books from the author and stock them for two months. Once those two months are up, Majewski said that the authors can pick up the books that didn’t sell and are paid for the ones that do.

Majewski, while taking her time to evaluate each book, said that she isn’t being as selective at this point in time because she wants to build up Parthenon’s local interest section.

“I love when people come in and they’re all excited and their like, ‘I’ve written this book, I really want to get it on the shelves,’ and it’s like, awesome, all you have to do is submit the form and then I email them back as soon as I can,” said Majewski.

The most popular genre of books by local authors that Parthenon sells are local interest books. Think Linda Lowen’s 100 Things to Do in Syracuse Before You Die or Robin Wall Kimmerer’s Braiding Sweetgrass, a book about indigenous wisdom and scientific knowledge around environmentalism – which quickly flies off the shelves, said Majewski.

Children’s picture books are also common to see on the author’s bookshelf.

Here are 58 books by local authors in Central New York available at the shop, starting with the five best sellers:

2. 100 Things to Do in Syracuse Before You Die by Linda Lowens

6. The Exiles of Tearlach by Shannon Tompkins

9. The Gift of Sun Lee by Diane Bostick

10. The George Stories by Christopher Gould

11. The Summer of Christmas by Juliet and Keith Giglio

12. The Lightness by Emily Temple

14. My Road-A Runner’s Journey through Persistent Pain to Healing by Julie B. Hughes

19. An Apple for Harriet Tubman by Susan Keeter

24. Scrapped: Justice and a Teen Informant by Lisa Peebles and John O’Brien

27. The Lion, the Rabbit, and the Puppy by Jessica Sicherman and Michael Gilbert

28. Lessons and Suggestions for Building Your Wealth by Nicholas Claps

30. The Soul of Central New York by Sean Kirst

32. Jewish Community of Syracuse by Barbara Sheklin Davis and Susan B. Rabin

35. The Privileges by Jonathan Dee

36. The Locals by Jonathan Dee

38. 100 Things Syracuse Fans Should Know & Do Before They Die by Scott Pitonaik

39. College in the 80’s: One Syracuse Story by Dave Rotell

40. Hockey at Syracuse by Jim Mancuso

42. A Swim in a Pond in the Rain by George Saunders

43. Lincoln in the Bardo by George Saunders

44. Tenth of December by George Saunders

45. Congratulations, by the way: Some Thoughts on Kindness by George Saunders

49. ’59: The Story of the 1959 Syracuse University National Championship Football Team by Gary B. Youmans

51. The Onion Picker: Carmen Basilio and Boxing in the 1950s by Gary B. Youmans

52. Life and Love in the Adirondacks by Gary B. Youmans

54: From the Gunroom by Keith Stahl

58. Love Under Will by Khalid El Bey