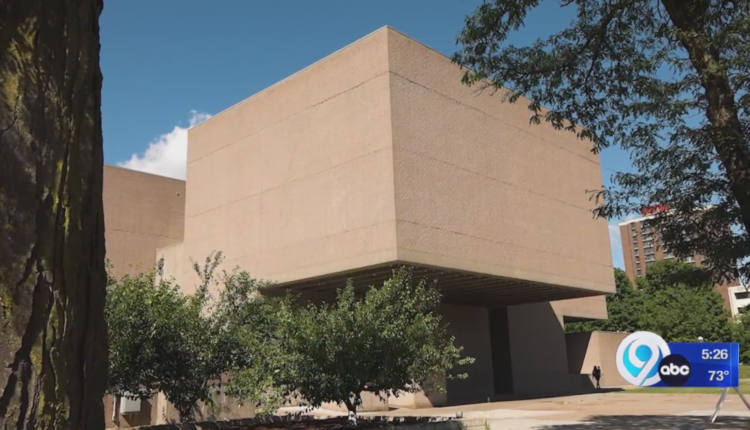 (WSYR-TV) — The first art you notice at the Everson Museum in downtown Syracuse is the building itself. Described as a work of art when it was built in the late 1960’s, it was the first museum designed by world-renowned architect IM Pei.

“He (IM Pei) built it as a sculpture for showing sculptures,” says Garth Johnson, Everson Museum curator of ceramics. “So, one of the things that I hate most as a curator is putting up shows in a plain white cube.”

To fight that, Pei designed galleries of different shapes and heights to accommodate a collection of firsts. The first museum to focus on American Art, to collect video art, and it’s developed the nation’s number one collection of ceramics, including the world-renowned Scarab Vase by Syracuse potter Adelaide Alsop Robineau.

The works on display in each gallery turn over two to three times a year, giving people a new view, no matter how often they visit. You might see Edward Hicks’ “Peaceable Kingdom,” a Gilbert Stuart portrait of George Washington, works by Frederick Remington, Andrew Wyeth, or Helen Frankenthaler.

“There’s certainly the ceramics nerds who are like me who are coming to make their pilgrimage to the Everson. But we really think of ourselves as a community exhibit, so no matter which exhibit we have up, we’ll connect with different populations,” Johnson says.

“When you need a little break from work, you walk up to these galleries and you take a walk around and you just, there just is an immediate calming effect to see all this beautiful and inspiring and thought-provoking art around you,” says Kristin Sheehan, Everson Museum Communications Director.

At the Everson Museum, there is gallery upon gallery of fine art that you can spend hours looking at and admiring, and coming soon, believe it or not, artwork you can eat off of.

Artist and ceramics collector Louise Rosenfield has donated over three thousand pieces from her private collection. They’ll be used in the Everson’s soon-to-open new cafe, to be named in her honor.

“She doesn’t want these pieces to sit there untouched on a shelf. She wants them to be used until she said every last piece is broken, except maybe one, and maybe that one will go in an art museum,” Sheehan says.

“Even if you don’t think that you are a museum person, we’re planning an exhibit that’s coming up on art that is associated with basketball. And those are the kinds of things that we take on. So you should expect to encounter something unexpected,” Johnson says.

The Everson Museum of Art is open five days a week, Wednesday through Sunday, in downtown Syracuse.