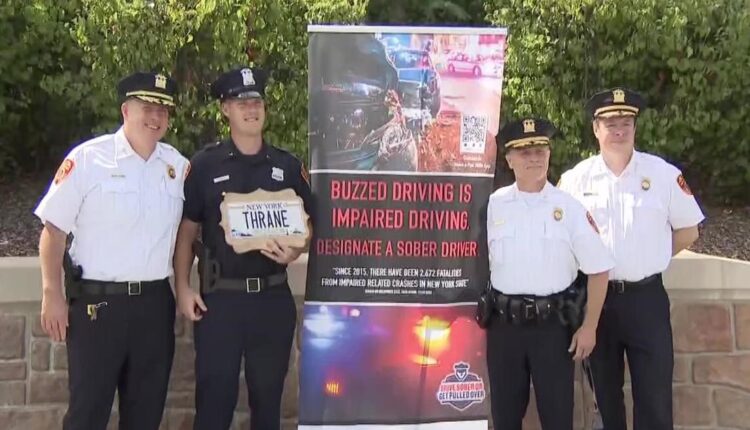 DIX HILLS, NY – Drive sober, or get pulled over.

That’s the message of a major push to launch across New York starting next week.

The goal of that campaign is to crack down on drunk and impaired driving.

As CBS2’s Carolyn Gusoff reports, even with so much drunk driving education, crashes are surprisingly spiking.

“I’ll never be the same person I was when I left my home that day,” said Suffolk County Police Officer Timothy Thrane.

One moment last November, Thrane was directing traffic around a car crash – the next, he was a victim of a drunk driver. A chain reaction crash nearly killed the father of three. He suffered a fractured skull, a brain bleed, and broken bones. After months in a coma, he would have to learn to walk again.

Thrane is now teaching the dire consequences of bad decisions he calls 100% preventable.

“Get a ride home. You might make it home some nights drinking, but one night you won’t. You’re going to pay the consequences,” Thrane said.

His plea comes amid troubling new numbers. The Governor’s Traffic Safety Committee reports a spike in impaired driving crashes – up 11% in New York state from 2020-21. Suffolk County is up 23%.

Drivers worry about increased rideshare prices are a factor.

“They don’t want to pay for that,” one person said.

“Growing up, all you ever heard wasn’t drive drunk, and I thought we were kind of past it, but I guess not,” said another.

Police will be out in force from Aug. 19 through Labor Day Weekend. Expect sobriety checkpoints and specially trained officers to detect non-alcohol impairment.

“While impaired drivers may think they are less likely to cause a crash or get caught if they take local roads or a route they are familiar with, that is not the case. Local police will be highly visible during this campaign,” said Christian Jackstadt , executive deputy commissioner of the New York Department of Motor Vehicles.

They recommend the state’s free mobile app, called “Have A Plan,” to find a rideshare, plan your night and report a drunk driver.

“You’re more likely to lose a loved one in a car-related accident due to DWI than assault or robbery or other means,” said Suffolk County Police Chief of Patrol Gerhard Hardy.

Thrane says there is no excuse.

“You don’t want to be the good person who makes the poor choice and has to live with the fact that you killed or severely injured someone,” Thrane said.

Soon, he hopes to return to policing, to continue to spread a life-saving message.

Nassau and Suffolk Counties had the most impaired driving fatalities of all counties in the state last year.

Carolyn Gusoff has covered some of the most high profile news stories in the New York City area and is best known as a trusted, tenacious, consistent and caring voice of Long Island’s concerns.