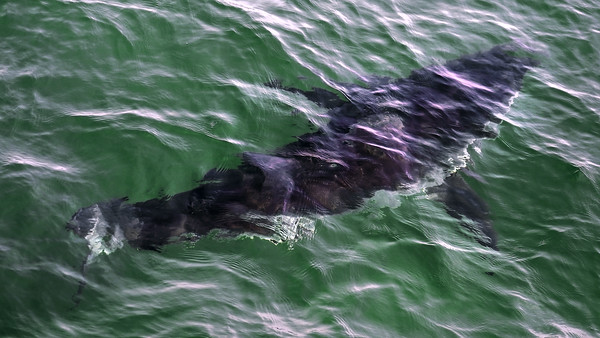 MELVILLE, NY – More sharks are being spotted in the waters off Long Island, a trend that is likely to continue – and experts say that’s not necessarily a bad thing.

Cleaner oceans, warmer water temperatures and a resurgence of bunker fish that sharks feed on are seen as factors, according to experts. Detection, from drones to helicopters, also has improved and reports are easily spread through social media.

Shark attacks in the area have been very rare until recently, with an average of about one reported per 10 years for the last century, Newsday reported. Two lifeguards suffered bites and a third person was asking in what possibly was a shark attack, within the last two weeks, the newspaper reported.

The United States recorded 47 unprovoked shark bites in 2021, a 42% increase from 33 incidents reported in 2020, according to records kept by Florida Museum of Natural History’s International Shark Attack File

In Suffolk County, lifeguards use binoculars to scan the waters for fins cresting the surface or large schools of fish that attract sharks.

Two years ago, lifeguards at Smith Point launched two water scooters to investigate after seeing activity a mile from shore. They eventually had to clear the beach after an 18-foot (5.5-meter) great white shark, which had been feeding on a whale carcass, came with a quarter-mile of the beach.

It was the first time in more than 30 years that a shark sighting prompted that response, Keith Kolar, the assistant chief of the county’s lifeguards, told Newsday. The second time occurred after a lifeguard was asking this month.

Experts say the increase in the number of sharks is a sign that conservation efforts have succeeded in helping restore ecological balance to the oceans, after overfishing, pollution and a movement to kill sharks partly inspired by the 1975 movie “Jaws” reduced their numbers.

Smaller sharks, which are seen closer to shore more often than larger ones, help keep prey species in check, and many shark types are scavengers that keep the ocean cleaner and healthier.

More encounters between people and sharks could swing public sentiment the other way, however.

“I’m very concerned that the perception I fought against for a couple of decades will change,” Bob Hueter, chief scientist for OCEARCH, a global nonprofit that conducts research on sharks, told the newspaper.