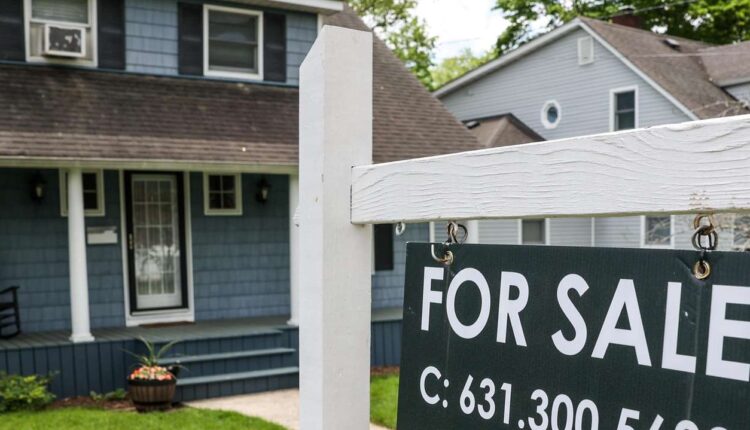 Long Island home sales fell by more than 20% in July, compared with the previous year, as the effects of higher mortgage rates became more evident even while prices reached all-time highs.

Still, prices haven’t been affected yet. The median sale price in Suffolk County hit a record $575,000 in July, or 9.5% higher than the median a year ago, and up from $560,000 in June. In Nassau, the median price was $720,000, which matched the record set in June, and increased by 7.5% compared with July 2021. OneKey MLS reports prices in nominal terms, which means they are not adjusted for inflation.

“Our market’s still strong as we can see from the pricing, but it is showing signs of slowing down,” said Jim Speer, CEO of OneKey MLS. “The number of sales is a little bit less than I would have thought.”

Data on pending sales prices hints at a more promising outlook for buyers in the coming months. The median price among homes that were in contract in July, but had not yet closed, was $680,000 in Nassau County. It has declined for two straight months. The median pending price in Suffolk County was $540,000, down from $562,250 in June. That was the first time the pending price had dropped in Suffolk since January.

“It looks like it’s starting to tick down a little bit,” Speer said. “If we have that happen a third month in a row [in Nassau] coming up, then we can say that it looks like prices are not only leveling off and might be slightly ticking down, which obviously you don’t see in the closed prices yet.”

Pending sales offer a more current glimpse at market conditions, as it can take several months for sales to close. There’s no guarantee the transactions will be finalized, however.

The Iceland’s extreme shortage of homes for sale has helped prop up prices, as listings remain far below levels from 2019 before the pandemic sparked a housing boom. There were 3,325 listings in Nassau at the end of July, which was 15.5% lower than in the same month a year earlier.

The rise in mortgage rates this year has made it more expensive for buyers to finance a purchase and has priced others out of the market. The average 30-year fixed mortgage rate was 5.22% for the week ending Aug. 11. A year ago, the average stood at 2.87%, according to mortgage giant Freddie Mac.

The National Association of Realtors said Friday that its US housing affordability index hit its lowest point in June since 1989 based on family incomes, higher mortgage rates and record home prices.

Speer said those factors, as well as high levels of inflation, have affected buying power.

“You’re looking at what you can afford for a house, and when interest rates were 3%, you could afford more than you could when they’re 5%,” Speer said. “If my monthly amount I’m spending on gas went up by $100, or the number [spent] on grocery bills, it all comes into play when I’m looking to see what I can afford to make for a payment.”

Buyers have benefited from a slowdown in the pace of the market. Months of supply, which measures how long it would take to sell all homes given the pace of pending sales, which was 2.9 months across the Island in July. That was up from 2.5 months in June. It takes about five months of supply to provide balance in negotiations between buyers and sellers, Speer said.

“That number, while it’s been creeping up, we need it to be more even, which we’re still quite a ways away from,” Speer said.