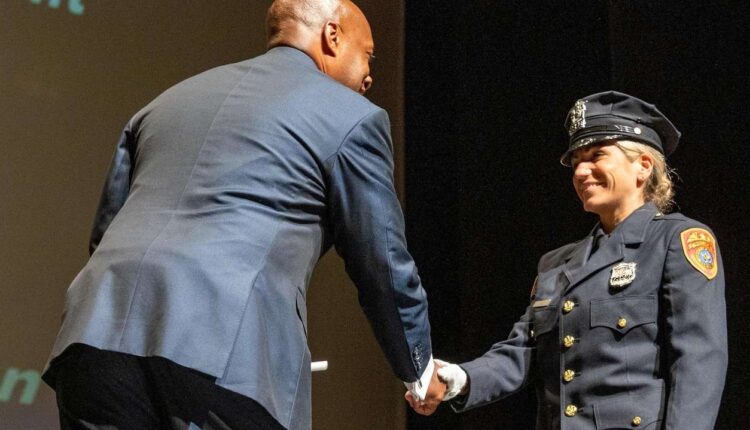 The Suffolk County Police Academy graduated 82 recruits Friday as new measures to increase diversity and anti-bias training have been added to recruitment and education.

Most of the recruits, 70, will serve in the Suffolk County Police Department and the remainder will head to the county sheriff’s department, Stony Brook University police and the Town of East Hampton police.

“It’s one of the most important professions in our nation, it’s also one of the most challenging and difficult,” County Executive Steve Bellone told the class at the graduation ceremony at the Van Nostrand theater at Suffolk County Community College in Brentwood.

Suffolk County police commissioner Rodney K. Harrison told the new officers that their 31 weeks of training had prepared them for the work ahead.

“Being a police officer is a unique job, it’s not for everyone,” Harrison told them. “Responding to those who, unfortunately, are in a vulnerable time in their life sometimes is not the easiest, but you’ll be ready. Stay confident and courageous, and you’ll be able to handle any situation.”

The new officers graduated at a time when police reform plans have begun to be implemented and the county is trying to bring more minorities into its ranks. A Newsday investigation published last year showed that hiring practices in Nassau and Suffolk police departments had rejected Black and Hispanic candidates to the police academy at higher rates than white candidates.

Suffolk County has implemented new procedures to try to diversify the police force, including a mechanism for unsuccessful applicants to appeal hiring decisions.

Speaking after the ceremony, Harrison said more work needs to be done.

“Everybody around me knows that this is one of my number one priorities … diversifying this organization,” Harrison said. He said the department needs to continue doing outreach in Black and brown communities and that he would continue going to high schools to tell students about the positives of becoming a police officer.

“Me being a person of color, being the leader of this department, it’s good that they hear from the horse’s mouth regarding, ‘Hey listen. We want you to be part of this organization,’ ” Harrison said.

New police officers said they wanted to serve the communities in Suffolk County.

“I always wanted to help people out,” said Jessica Anderson, 27, a third-generation police officer who served in the New York City Police Department for two years. “I came from the city really enjoy being part of the community and helping people in their worst of times.”

A new approach to training at the academy has been role-playing with members of the community.

Graduate Clayton Barnett Jr., 28, said this was beneficial in his training.

“It was our first experience interacting with the public,” Barnett said. “We got a feel of how to talk and approach them on a professional level, and for them to see how we handle situations.”

Lougazi back to winning ways at Buffalo