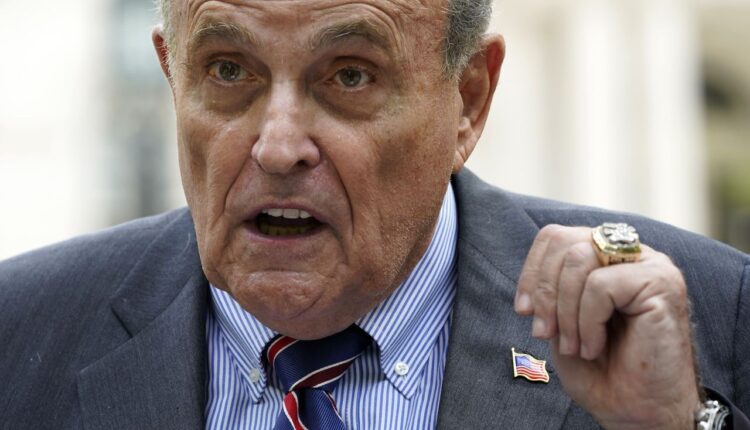 ATLANTA (AP) — A judge in New York has ordered Rudy Giuliani to appear next month before a special grand jury in Atlanta that’s investigating whether former President Donald Trump and others illegally tried to interfere in the 2020 general election in Georgia.

New York Supreme Court Justice Thomas Farber on July 13 issued an order directing Giuliani, a Trump lawyer and former New York City mayor, to appear before the special grand jury on Aug. 9 and on any other dates ordered by the court in Atlanta, according to documents filed Wednesday in Fulton County Superior Court.

Giuliani’s lawyer did not immediately return a call and email seeking comment Wednesday.

Fulton County District Attorney Fani Willis began her investigation early last year, and a special grand jury with subpoena power was seated in May at her request. In a letter requesting the special grand jury, she said her team was looking into “any coordinated attempts to unlawfully alter the outcome of the 2020 elections in this state.”

Earlier this month, she filed petitions to compel seven Trump associates, including Giuliani and US Sen Lindsey Graham, to testify before the special grand jury.

Because they don’t live in Georgia, she had to use a process that involves getting a judge in the state where they live to order them to appear.

Giuliani had been summoned to appear in court in New York on July 13 to present any reasons why a subpoena should not be issued for him to testify in Atlanta, but he failed to show up for the hearing, Farber wrote in his order.

It’s possible that Giuliani could file a motion with the court in Atlanta to try to avoid testing. Others who have been subpoenaed have already filed challenges seeking to get out of appearing before the special grand jury.

In the petition for Giuliani’s testimony, Willis identified him as both a personal attorney for Trump and a lead attorney for his campaign.

She wrote that he and others presented a Georgia state Senate subcommittee with a video recording of election workers that Giuliani allegedly showed them producing “suitcases” of unlawful ballots from unknown sources, outside the view of election poll watchers.

Within 24 hours of the hearing on Dec. 3, 2020, Secretary of State Brad Raffensperger’s office had debunked the video and said that it had found that no voter fraud had taken place at the site. Nevertheless, Giuliani continued to make statements to the public and in subsequent legislative hearings claiming widespread voter fraud using that debunked video, Willis wrote.

“There is evidence that (Giuliani’s) appearance and testimony at the hearing was part of a multi-state, plan coordinated by the Trump Campaign to influence the results of the November 2020 election in Georgia and elsewhere,” the petition says.