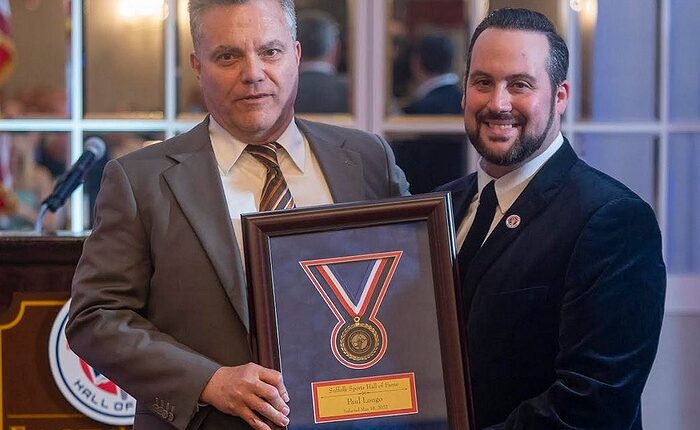 Paul Longo, William Floyd High School’s legendary football coach, was recently inducted into the Suffolk Sports Hall of Fame as a member of the Class of 2022 for his tremendous accomplishments over the course of…

Paul Longo, William Floyd High School’s legendary football coach, was recently inducted into the Suffolk Sports Hall of Fame as a member of the Class of 2022 for his tremendous accomplishments over the course of his 27 years coaching the Colonials. He joins a renowned class of honorees across all facets of the sports world who have made great contributions to their fields and their home county proud in the process. The induction is just one of many incredible accolades in Coach Longo’s illustrious career, which includes 13 Suffolk County championships, five Long Island titles and taking up the mantle of the winningest coach in Suffolk County public school history. Coach Longo, who was inducted into the William Floyd Athletic Hall of Fame in 2019, currently has 214 career wins and counting.

“On behalf of the William Floyd School District, I would like to congratulate Coach Longo on this tremendous accomplishment. His knowledge of the game and commitment to hard work and dedication is evident by the on-the-field performance of his teams each and every year,” said Kevin M. Coster, Superintendent of Schools, William Floyd School District. “More importantly, however, is that as successful as his teams have been, Coach Longo has been even more successful in helping to instill positive values ​​to countless student-athletes he has had the privilege of coaching.”

During the ceremony, held at the East Wind in Wading River, former New York Jets center and Super Bowl III champion John Schmitt spoke about the meaning of the Suffolk Hall of Fame on the 30th anniversary of his induction. Then, Class of 2022 inductee AJ Preller, current general manager and president of baseball operations for the San Diego Padres, addressed the recipients and their guests on behalf of this year’s class.

Other inductees alongside Coach Longo include Ralph Macchio of The Karate Kid fame, as a special recognition inductee for his contributions as a culturally significant icon in the martial arts; AJ Preller, San Diego Padres; Linda Cohn, ESPN broadcaster; Billy Koch, former MLB closer and 2002 American League Relief Pitcher of the Year; and many more. Click here to see the full list.

“This induction class packs a heavy punch of historic significance,” said Chris R. Vaccaro, Executive Director of the Suffolk Sports Hall of Fame. “From athletes to journalists, coaches to local icons and officials, the class has an amazing blend of individuals who have made their mark and have reached the pinnacle of success in their respective disciplines.”

Suffolk County’s winningest high school football coach from William Floyd High School. In 27 seasons, through 2022, he is 214-61 and has made the playoffs in 22 seasons. His teams have won five Long Island titles and 13 Suffolk County championships. The Colonials have won three Rutgers Trophies as the top team in Suffolk. His 42-game win streak from 2005-2008 is a Long Island record. Eighteen of his teams have ranked in the top 10 on Long Island; and, 10 of those teams ranked in the top 10 in New York State. As a [former] coach for Sachem hockey, his team won multiple Suffolk County championships.