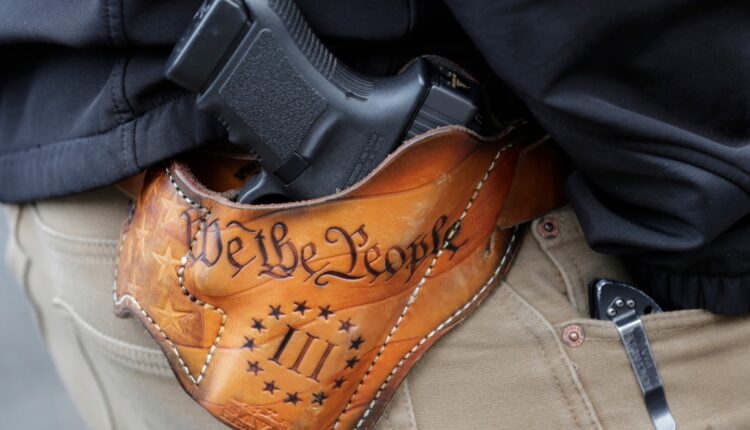 Describing a July 4 weekend “wracked by gunfire throughout Boston,” interim Suffolk County District Attorney Kevin Hayden called on governors and legislators in states with “easy-access gun purchase laws” to consider the impacts their lax statutes have on cities like Boston.

“We’re seeing more daylight shootings on busy streets and more guns in the hands of teenagers,” said Hayden, named to fill the vacancy left by the appointment of Rachael Rollins as US attorney.

“The common thread, beyond shooters willing to send bullets flying regardless of where they are, is that the guns were likely trafficked in from another state.”

According to the DA’s office, police responded to more than a dozen shooting scenes across Boston over the holiday weekend that left 10 people wounded.

Police also recently seized a handgun from a 13-year-old, while groups of men in vehicles brazenly fired at each other during a daytime shootout in Chelsea.

Hayden, a candidate for the permanent Suffolk DA position, estimated that 75% of the illegal firearms used in Boston-area crimes come from other states, a disturbing situation he described as “a lethal river of steel flowing from northern and southern states onto the streets of Boston.”

The DA’s office, along with the Bureau of Alcohol, Tobacco, Firearms and Explosives and the Boston Police, this year created Boston First, a program that “uses a federal database to track guns and gun casings recovered from crime scenes to their source of origin , and to connect them to other crimes.”

Those figures probably mirror what other urban centers, like Lowell and Fitchburg, have experienced.

“When more than three out of four guns seized in Boston come from out of state, it tells me three things. First, gun laws in Massachusetts work well, Hayden said. “Second, gun laws in many other states don’t. And third, gun traffickers know which states are easiest for them to amass their murderous inventory and which states are best to sell that inventory.”

The inability to significantly slow the flow of firearms into a state that strictly enforces its own gun-control laws continues to frustrate DAs and police chiefs throughout the commonwealth.

It certainly isn’t for lack of trying.

In 2018, Gov. Charlie Baker announced that Massachusetts would join a multistate gun-safety network in order to share data with like-minded states to help stem the flow of illegal firearms.

The States for Gun Safety Coalition was launched by the Democrat governors of New York, New Jersey, Rhode Island and Connecticut.

Coalition members agreed to improve the sharing of information about “individuals who are prohibited from purchasing or possessing a firearm within that state,” for reasons including arrest warrants, protection orders, debilitating mental health conditions or criminal history.

The member states, in addition to establishing a regional gun-violence consortium, said they would encourage law enforcement in their jurisdictions to work together to trace out-of-state guns used in crimes, and share information in hopes of intercepting illegal guns carried across state lines.

Not much has been heard about that gun-interdiction initiative since, and the statistics cited by the interim Suffolk DA suggest that it had minimal impact on the interstate flow of illegal firearms.

Even regional efforts can only do so much to limit the trafficking of illicit arms in a country with a hodgepodge of gun regulations that vary from state to state.

Only a federal gun control standard applied to all 50 states will allow us to make significant inroads into this deadly trade.