Lesbian couple in PA denied cake a month before wedding. Syracuse bakery comes to the rescue 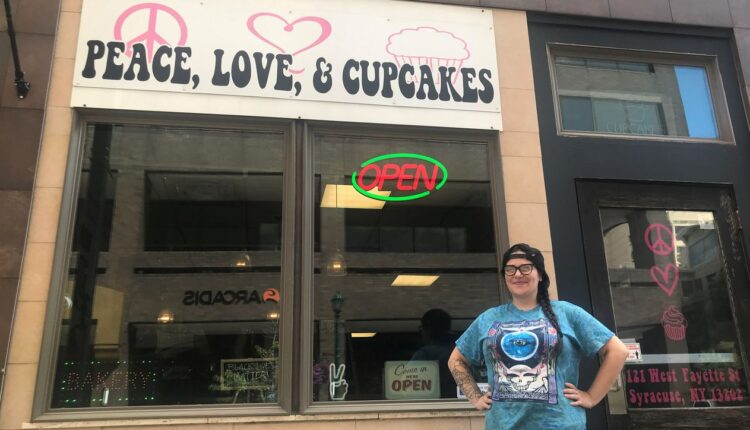 Syracuse, NY — Rebecca Riley – owner of Peace, Love, Cupcakes in Syracuse – read the online post about a bakery refusing to make a cake for a lesbian couple a month before their wedding.

The couple, Desirie White and Jess Dowd, of Berwick Pennsylvania, posted emails Tuesday from the baker who had taken their order and money to make the cake.

“I will not be able to do this for you,” the Pennsylvania bakery owner wrote. “My refusal to make your cake is based on my fidelity to the God of Scripture.”

The Syracuse baker was mad and decided she had to try to help.

She found White’s Facebook profile and saw that the couple lived about three hours away from Syracuse. She thought it would be no problem to reach out and provide them with a cake.

Riley was unable to comment on White and Dowds’s Facebook posts. She started reaching out to friends and making comments on posts to try to connect with the couple. She shared the post on her bakery’s page and asked if anyone could help her contact them.

“I cannot begin to tell you all how furious this makes me,” Riley started her post. “The only way to fight this hate is with LOVE!”

Finally, Riley and White were able to connect.

White explained they had been in contact with the baker and made it clear it was for a lesbian wedding. She needed a vegan cake because of her allergies, White said.

Learning the baker wouldn’t make the cake was painful, White said on her Facebook.

“I immediately started crying, like something hit me in the gut,” White told Syracuse.com | The Post-Standard on Wednesday.

Syracuse.com reached out to the Pennsylvania bakery, O Taste and See Delight, on Wednesday afternoon for comment. The couple did say the bakery refunded their money.

White posted the emails from the Pennsylvania bakery on her Facebook privately and then a friend urged her to make it public, she said.

“With the nature of it I couldn’t keep quiet,” she said. “I didn’t want it to happen to others.”

Once the post was public support started pouring in. The post made it as far as Norway, she said.

White and Riley discussed what would the couple consider their perfect wedding cake. A vegan lemon cake was the answer.

Riley makes all sorts of cupcakes but her vegan cake recipe is chocolate. She told the couple she would test a bunch of recipes to find one she liked. Worse case, she would have Golden Hour Baking in Syracuse make a small lemon vegan cake and she would make a larger chocolate cake.

Riley pledged this would all be free for the couple.

Riley, whose bakery at 121 W. Fayette St. is complete with a “Love is love” sign, said that she wanted to make a stand against hate.

“The point is to combat that hate with a grand gesture of love,” she said.

Riley’s gesture of love has traveled the three hours to White.

White became teary Wednesday when explaining how the support made her feel.

“Some people in my family wouldn’t go this far for us,” she said.

Desirie White (left) and Jess Dowd (right) were denied a wedding cake from a Pennsylvania baker one month before their wedding. A Syracuse bakery, Peace, Love, and Cupcakes, stepped in to provide them with a cake. (courtesy Desirie White)