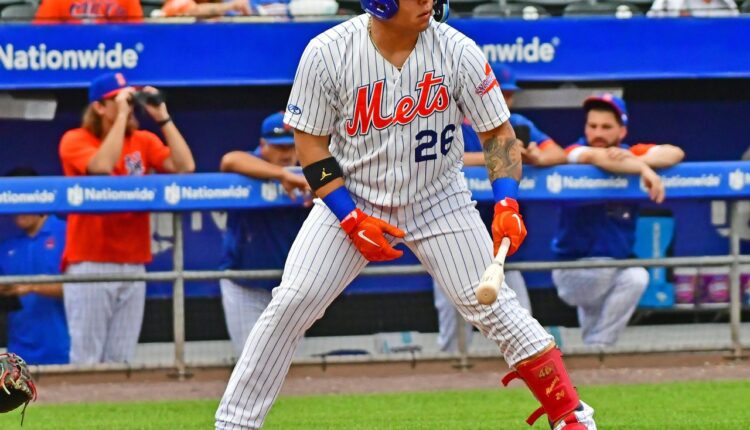 Worcester, MA – The Syracuse Mets roared back from an early deficit on a steamy Saturday afternoon, scoring seven out of the game’s final eight runs in the game en route to a 7-3 win over the Worcester Red Sox. The Mets won the first two games of the three-game weekend series against the Red Sox. Syracuse has also won 10 of its first 14 games against Worcester this season.

Early on, it looked like it may be Worcester’s (47-45) day, as the Red Sox jumped out to a 2-0 lead with single runs in the third and fourth innings. Grant Williams singled leading off the third, swiping his way up to second base with one out. After a Triston Casas flyout, Ronaldo Hernández brought Williams home on a groundball single into left field for a 1-0 WooSox lead.

In the fourth, Pedro Castellanos doubled to start the inning in the midst of a 2-for-4 afternoon at the plate. After a Ryan Fitzgerald strikeout, Johan Mieses singled home Castellanos on a line drive into right field to make it a 2-0 ballgame. Mieses has reached base in five of his seven plate appearances so far in this weekend’s series.

Syracuse (42-50) took control of the game from there. In the fifth, Francisco Álvarez made magic happen. The top prospect in Minor League Baseball came to the plate with the bases loaded and two outs after Terrance Gore, Deven Marrero, and Kramer Robertson had all walked earlier in the inning. On an 0-1 pitch, Álvarez smacked a no-doubt drive over the left-field fence to give the Mets a 4-2 advantage in the blink of an eye. The homer was the first Triple-A home run for Álvarez and his first-career grand slam.

In the sixth, the Mets made it happen again with two outs. After a leadoff double for Mark Vientos, who went 2-for-4 at the plate in the game, Marrero came to the plate later in the frame with two outs and blasted a two-run shot over the wall in left-center field to push the Syracuse lead to four, 6-2. Each of Syracuse’s first six runs came via two-out home runs.

In the eighth, the Mets capped off their scoring. Nick Plummer reached to start the inning when he was hit by a pitch, and after a Vientos strikeout, Lee doubled home Plummer with a laser-beam line drive that one-hopped the wall in center field to give the Mets a 7-2 edge .

It was still 7-2 entering the bottom of the ninth inning when things got interesting. Michel Otañez entered the game out of the bullpen for the Mets and promptly walked Johan Mieses to start the inning, followed by a Nick Sogard single that runners on the corners with nobody out. A fielder’s choice groundout by Grant Williams then scored Mieses to trim the deficit to four, 7-3, and put Williams on first with one out. Devlin Granberg was the next batter, pounding a pitch off the 22-foot-high wall in right field for a double. The WooSox, however, got greedy, attempting to score Williams from first base on the double. A perfect relay from Lee to Tzu-Wei Lin to home plate nabbed Williams and effectively snuffed out the comeback hopes for the Red Sox. Casas would walk to make it two on base with two outs, but then Hernández grounded out to end the game and hand the Mets back-to-back wins over the WooSox to start their three-game series.

Syracuse wraps up its series at Worcester on Sunday afternoon at 1:05 pm Left-hander Thomas Szapucki is slated to start for the Mets, opposed by left-hander Chris Murphy for the Red Sox.