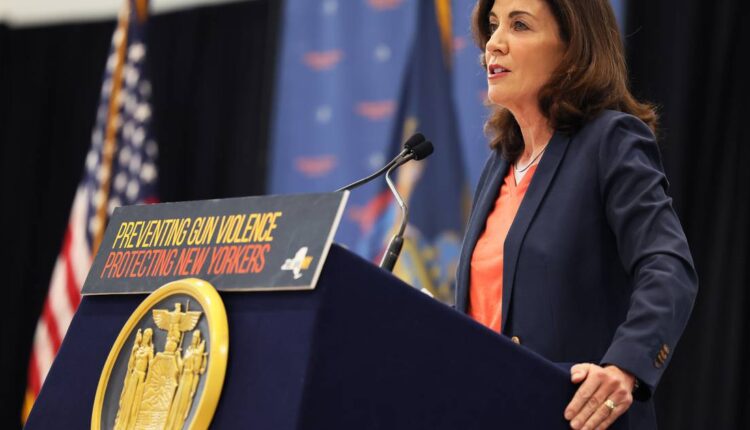 ALBANY — New York recorded a major uptick in the use of the state’s red flag law following the deadly Buffalo mass shooting this spring.

gov. Hochul announced Friday that more applications for Extreme Risk Protection Orders, meant to keep guns away from people deemed a danger to themselves or others, were filed in the last three months than in all of 2021.

“I thank law enforcement for now using this tool to protect our citizens,” the governor said during an event on Long Island. “We have to be proactive about this, that’s how we save lives.”

State Police have filed 184 red flag applications since mid-May, a more than 93% increase over the 95 orders filed in all of 2021.

The announcement was made in Suffolk County, where the Sheriff’s Office reported a more than 75% increase in the use of the Red Flag Law over the last three months.

The upticks come after Hochul, four days after the Buffalo shooting left 10 Black shopper dead, issued an executive order directing the State Police to apply for an ERPO when there is probable cause that someone posed a danger to themselves or others.

A total of 832 temporary and final ERPOs were issued in the state over the past three months, compared to 1,424 issued from August 2019 to April 2020, according to the governor’s office.

Police walk outside the Tops grocery store May 15, 2022, in Buffalo, NY (Joshua Bessex/AP)

Payton Gendron, the alleged shooter in the Buffalo supermarket massacre, traveled to the city in order to specifically target African Americans, according to investigators.

Police and prosecutors also say the 18-year-old may have been influenced by white supremacist ideology online and inspired by previous race-based shootings, including a 2019 New Zealand attack in which 51 people were killed at a pair of mosques.

Gendron was also on authorities radar a year before the Buffalo incident after allegedly making threatening comments while still in high school. That did not prevent him from purchasing an AR-15 assault weapon.

“People are telegraphing about what they’re going to do,” Hochul said Friday. “The information’s out there. The intent is out there.”

Earlier this week, Hochul pledged $10 million in state funds for the development of localized domestic terrorism prevention plans across the state.