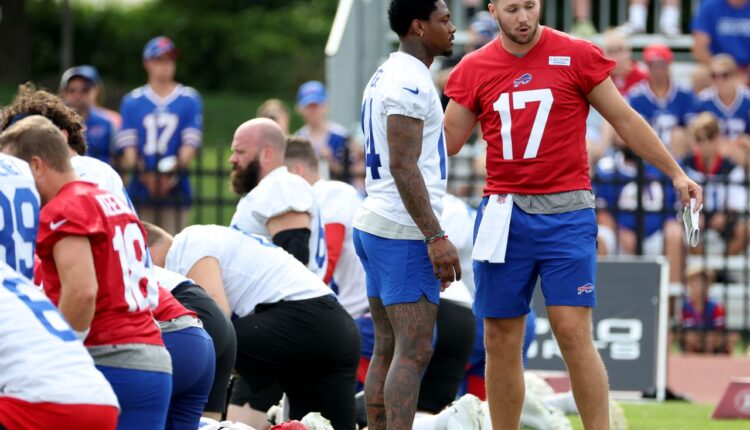 Pittsford, NY — Josh Allen warned everybody after the first practice that it takes time to work out any early issues in training camp.

The Buffalo Bills worked extensively in the red zone on the first day of camp and the defense outplayed the offense.

“That’s obviously why we do this on the first day,” Allen said. “Let’s figure out what’s going to work, how we can fix things and how we can improve.”

Those comments were particularity prophetic on Wednesday as the Bills’ offense exploded, and Allen torched Buffalo’s defense in red zone drills at St. John Fisher University.

Allen threw seven red zone touchdowns and was near perfect on the day, completing 13 of 15 passes. Stefon Diggs, Gabriel Davis, and Dawson Knox were the primary targets as Allen spread the ball around and made life difficult for the Bills secondary.

After practice, left tackle Dion Dawkins said camp comes with its ups and downs, but the Bills know their offense can erupt at any moment.

The Bills offense looked close to perfect Wednesday — much more like the unit fans are expecting to score tons of points in 2022.

Allen’s best throw of the day came on a rocket over the middle to Isaiah McKenzie. Allen looked off of Diggs, who was to his left, scanned to his next progression, and uncorked a dart over the defensive line and put it right on McKenzie for the touchdown. The next play, Allen saw Knox in a mismatch against Tyrel Dodson, who gave up some separation to the tight end. Allen floated a perfect ball to Knox in the back of the end zone.

Davis caught two touchdowns on back-to-back throws from Allen in the middle portion of practice. The consistency that Davis showed late last season has carried over to this year. He said he came into camp at about 228 pounds, which is about six pounds heavier than his 222 playing weight in 2021.

“(Today, we were) Just working together, communicating and knowing what needs to be done.” Davis said after practice. “We were just kind of off yesterday. So being able to come out here and compete, make a lot of big plays, as you guys saw. That’s what we need. Whenever we’re down, we got to be able to come back and push forward, and that’s what we did.”

Dawkins smiled after practice when asked if Doyle celebrated after winning a rep against Von Miller. He said nobody celebrates on those plays because Miller will come back even harder. The second-year tackle/guard had his most memorable moment of training camp on Wednesday when his ability to slow down and stand up Miller as he tried to bull rush and then turn to a speed move allowed Allen the time to throw a touchdown strike to Davis.

Doyle played at right tackle on the first team in place of Spencer Brown, who continues to practice but not participate in team drills.

The first came as Basham took Hart off his spot, made him reset his feet, and then blew by him on the outside. The next rep came from Epenesa, who used brutal force as he bull-rushed his way into the pocket and nearly pushed Hart into the quarterback.

On Allen’s touchdown pass to Diggs late in practice – it was a pretty throw and catch – the play may have been whistled down if a referee was in attendance. Oliver broke through the line against a double team block and chased Allen all the way down to the left sideline before Allen got rid of the ball.

It appeared that Oliver touched him on the jersey with a tap before he released the ball. Oliver has been a force all week and is going to be must-watch on Saturday when the pads come on.

5. Duke Johnson starting to show up

Johnson and all four of the other running backs received a lot of work on the day. All five looked good, but Johnson’s increased role was noteworthy. He has been quiet in camp so far and had a few nice runs on the day, including one that may have gone for a touchdown. Singletary was moving well, too.

6. Marquez Stevenson has his best practice of camp

Stevenson has gone from on-the-roster-bubble heading into camp to out-of-the-conversation with the play of Khalil Shakir early in camp. Stevenson had a couple nice OTAs practices but has been quiet in Rochester. That changed a bit on Wednesday when he made two catches that picked up his quarterback. One came from Case Keenum and the other was from Matt Barkley. Both were under-thrown and Stevenson had to make a sliding catch and secure the ball. He did it both times.

Stefon Diggs vs. Kaiir Elam is turning into one of the most exciting parts of practice. Today’s battle was fun to watch as they fought the entire rep on both occasions they went up against each other. It appeared that Diggs was held on one play and took issue with Elam after it ended.

Down in the trenches, Oliver was a menace, and made quick work of Tanner Owen on one rep. Dawkins and Greg Rousseau had a great rep as “Groot” landed a punch at the start and Dawkins recovered to finish his block. Cody Ford had one of the best reps of the session when he eliminated Daniel Joseph on his attempt at a bull rush. Doyle lost bad in his rep against Miller in this drill. That’ll happen.

Bates missed practice for the first time of camp and that allowed Greg Mancz to slide over and sub in for Rodger Saffold, who remains on the NFI list, at left guard. Davis Quessenberry worked at right guard in place for Bates. Crowder continues to miss time with “soreness and tightness,” and Kumerow was out again, too.

Love had a splash play today and it’s impressive that the veteran continues to stick on the roster. He went undrafted in 2018 and has stuck around in Buffalo ever since. On a Keenum pass, Love won his matchup and exploded into the backfield. Before the quarterback realized his presence, he tried to throw it to his right and Love was there to bat it down.

Whether it was in 1-on-1s during the early portion of practice or in team drills, Neal had his best practice of camp. He had several plays where he matched up against Diggs and held his own every time. The Bills have incredible depth at cornerback and the performance of Cam Lewis so far shows why general manager Brandon Beane hasn’t been more aggressive trying to bring in a veteran at the position.

Who is Jordan Simmons? Bills add guard with Rodger Saffold on NFI list

Allen will autograph pretty much anything at camp, even his teammates

Teenager shot and killed in Dorchester