7 takeaways from Bills’ Return of the Blue & Red scrimmage 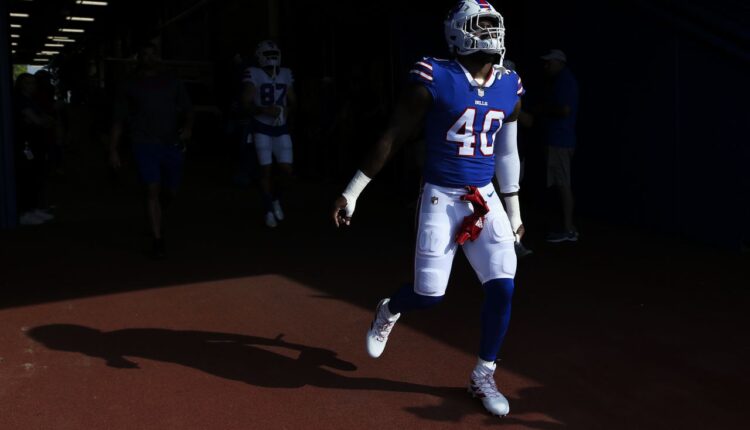 Orchard Park, NY — When Von Miller walked out of the tunnel for the first time at Highmark Stadium on Friday night in front of nearly 36,000 Buffalo Bills fans, sun beating down on his face in the middle of a sea of ​​red and blue, he said he felt like he was home.

Fans packed Miller’s new house for the return of the Blue & Red in hopes of getting their first glimpse of Miller in a Bills uniform. The 33-year-old had the night off, but he felt the love as fans showered the team with cheers throughout the night.

“I’ve been in some special places, but Buffalo is different,” Miller said after practice. “All the kids out here, supporting everybody. I seen so many 40 jerseys, it’s incredible man. We’re gonna have a fun year. This is a fun and incredible fan base and I’m excited to get it going for real. … It’s easy to fall in love with this place.”

Here are some takeaways from the night where the Bills scrimmaged for the majority of the two-hour practice.

Gabe Davis put on a show in front of the Bills Mafia at Highmark Stadium. Once the team began their 11 on 11 session, Davis was virtually unguardable. He opened with a touchdown reception from Josh Allen. On the first team offense’s second series, Allen went to Davis on back-to-back plays including one big gainer. Davis added a second touchdown later in practice with Dane Jackson attempting to cover the receiver. Davis would find the end zone one more time on a two-point conversion from Allen with Kaiir Elam in coverage.

No matter who the Bills lined up on Davis, the receiver seemed to come out on top. -Talbot

Miller wasn’t available so that meant Rousseau crept to the top of the watch list on Friday night. The second-year pass rusher recorded a sack early working against tackle David Quessenberry, who remains in at right tackle with Spencer Brown continuing to make his way back from a back injury.

Rousseau has spent most of his time trying to put on the brakes as he’s rushed against Allen. Tonight he was rewarded with a whistle by the officiating crew. Rousseau’s potential break out could be the kind of jump that takes Buffalo’s defense to another level.

With the injuries on the offensive line, there is legitimate concern that the offense may need a little help from the defense early in the season with the slate of games they open with. Rousseau offering consistent playmaking is going to help, especially if Jordan Poyer isn’t ready by Week 1. – Parrino

A few of members of the Bills’ rookie class made notable plays on Friday night, but Khalil Shakir arguably had the best night of the draft picks.

Early in practice, Shakir was working with the third team offense. After a big play from Matt Barkley to Tanner Gentry, Buffalo’s No. 3 quarterback looked Shakir’s way in the end zone. Matched up with cornerback Tim Harris, Shakir was able to haul in the back shoulder pass for a touchdown following a nice adjustment. In addition to the third team offense celebrating around Shakir, Josh Allen made a point to run into the end zone to celebrate with the rookie receiver.

Shakir would work with the second team offense and connect on a pass from Case Keenum before hauling in another long catch from Barkley.

Buffalo does not have to rush to get Shakir on the field this season, but he could force his way on as long as he continues to make plays for the offense. -Talbot

Josh Allen just gets it

Allen came storming onto the field in a red jersey and a matching red helmet that looked a lot like the Bills’ famous helmet from the 1990s. Fans erupted, mostly because it was Allen, but the look definitely caught everybody’s attention. The pictures of the helmet went viral. On the field, Allen was dialed in and threw a pair of touchdowns to Davis and Dawson Knox. The second one to Knox came against safety Jaquan Johnson, who reacted too late to Knox breaking open. Allen put a laser on a line to Knox, who made the big play. – Parrino

Who’s in the lead at running back?

All three Bills running backs looked good on Friday. Devin Singletary started things off with a big run early in the scrimmage that went for about 30 yards. The run stood out because of how quickly Singletary found the hole and accelerated through it. Zack Moss received most of the work in the red zone on the offense’s first drive. He found it hard to operate at times but was running hard. The best play of his night came on a short pass from Allen. He took it in stride and turned it up a notch to get to the second level. Moss looked explosive again and continues to remain healthy. James Cook did most of his work on the second team, but he had his moments. Singletary still seems to have a lock on the starting job, but Moss is hot on his heels. There is likely going to be a short leash for any of the backs who prove to be ineffective with the talent that’s been accumulated in the room. – Parrino

Buffalo’s offensive line has been banged up at training camp, but the unit is starting to get some faces back into the lineup as the regular season approaches.

On Friday, Ryan Bates was working with the first team offense at Highmark Stadium. Bates is expected to start at right guard for the Bills this season after taking over the left guard spot last season. One person who was happy to see Bates return at The Return of the Blue & Red was left tackle Dion Dawkins.

“Anytime that we can have familiar faces in there, everybody is on the same page,” said Dawkins. “And as I always explain, the o-line with new guys and older guys, it all just goes in a bucket of speaking the same language. With Bates back in, everybody’s just a little bit more like on the same language base because we’re familiar with what he’s doing. But it’s a blessing. As long as he’s healthy, he could be out there with his pads and his helmet on. He’s doing the right thing. The Buffalo Bills signed him to play ball so as long as he’s on the field, he’s doing what he’s supposed to honestly do.”

Buffalo is still working on getting Rodger Saffold and Spencer Brown back onto the field, but Bates’ return was an encouraging sign for the offensive line. -Talbot

After 8 practices, Bills’ Kaiir Elam doesn’t feel like a rookie. He can thank Stefon Diggs for that

Odell Beckham Jr.,Von Miller running it back with Buffalo?