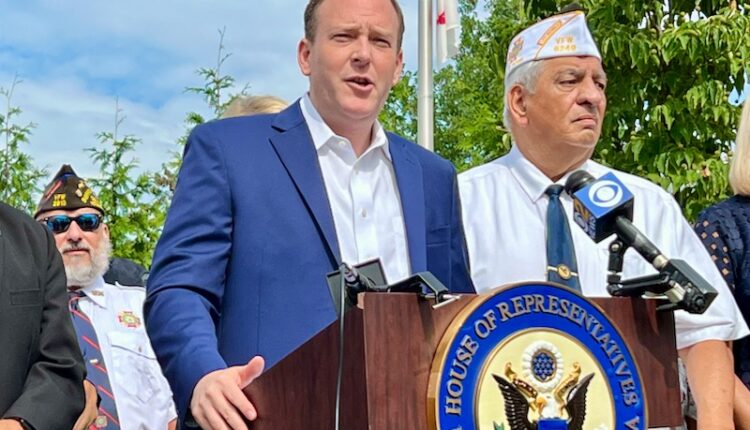 Dwyer, 31, was an Iraq War veteran from Mount Sinai who suffered from post-traumatic stress disorder and died in 2008 of an overdose while inhaling computer cleaner aerosol. As a New York State Senator in 2012, Zeldin sponsored a pilot of the Dwyer program, a peer-to-peer support program for veterans suffering from PTSD and traumatic brain injury. The program, piloted in Suffolk County, has since expanded throughout New York State and has a $7.7 million budget this year.

“As I travel around Suffolk County, over the years I’ve had countless veterans tell me that because of the Dwyer program, they are alive, they have a job, they have a family,” Zeldin said. “They credit the support that they’ve gotten from the Dwyer program for their ability to be able to cope with the mental wounds of war.”

Zeldin introduced a bill in March to fund $25 million in grants for three years through the Department of Veterans Affairs to implement the Dwyer program across the country.

“This was the brainchild of the congressman when he sat where I sit now as a senator,” State Senator Anthony Palumbo said today. “And it has just been obvious that the program has just been a tremendous success. It is clear that it’s something that we should be doing countrywide.”

Zeldin said leaders of veteran organizations use the Dwyer program as a model for an ideal peer-to-peer mental health program during congressional hearings. He said 14 veteran advocacy organizations have endorsed the program for adoption nationally.

“Our main objective is to keep this program strong and well, and support the congressman in his efforts to go national,” said Commander Joe Cognitore of Rocky Point’s VFW Post 6249.

Ann Morrison-Pacella, the Long Island regional director of the American Foundation for Suicide Prevention, said the organization is in support of nationalizing the Dwyer program. Suicide is a leading cause of death overall in the United States and veterans have an adjusted suicide rate that is 52.3% greater than the non-veteran US adult population, according to the latest data from the Centers for Disease Control and Prevention.

She said the program “will help to ensure that veterans are not left behind and that life-saving services are available across America.”

Zeldin, the Republican nominee for governor, was attacked by troubled Iraq veteran David Jakubonis, 43, in front of a VFW Post in upstate Monroe County during a July 21 campaign stop. His congressional office issued a media advisory framing today’s press event as a response to the attack, but Zeldin did not bring up the incident or mention the attacker until prompted by another speaker, Brookhaven Councilwoman Jane Bonner.

“A veteran in need is not aware of just how many resources were available in his town,” Zeldin said. “They’ve been trying to make contact with the veterans to be able to help that veteran in need. The mental wounds of war don’t stop at any geographic boundary.”

According to court, Jakubonis was intoxicated on the day of the attack and told a law enforcement officer he did not know who Zeldin was. He said he thought the congressman was making disparaging comments about veterans when he climbed onto the stage where Zeldin was speaking and, wearing spiked plastic knuckles, grabbed Zeldin by the arm, raised his hand with the weapon and told Zeldin, “You’re done .”

Jakubonis has struggled since his discharge from the Army. His wife died, leaving him with two young children. He drank heavily and while in recovery, had an alcoholic relapse on the day of the attack, according to his attorneys.

Zeldin said today residents and the veterans community in Monroe County want to provide Jakubonis with the help he needs so he can cope with whatever he’s struggling with..

“And we need to make sure we get him that help. The Dwyer program exists exactly for this particular moment,” Zeldin said.

Over the two weeks since the incident, Zeldin and his campaign have repeatedly pointed to the attack as an example of rising crimes in New York that Zeldin blames on criminal justice reforms passed by Democrats in 2019. He has used it to hammer incumbent Democratic Gov. Kathy Hochul for being “soft on crime”

Zeldin has also used Jakubonis’ release on his own recognition by a town justice following his July 22 arraignment as an example of what he calls the dangerous consequences of “cashless bail.”

Following his arrangement on a state charge of attempted assault, which under New York law is not “bail eligible” — a judge has no discretion to require bail for an attempt under the 2019 reforms — Jakubonis was arrested by the FBI on a federal charge of assaulting a member of Congress. He is currently in federal custody awaiting a detention hearing scheduled for Aug. 24. At that time, a federal judge will decide whether to set bail or keep the man in custody pending trial.

Zeldin today denied he has focused on cashless bail to the exclusion of veterans mental health issues in discussing the attack during his campaign over the past two weeks.

“While I don’t have all the answers — none of us here have all the answers — we do all know enough that we can make the call to Mr. Jakubonis that he interacts with the Monroe County veteran’s service agency,” Zeldin said, “That he has a conversation with them — that he has a confidential conversation with them — allow them to learn more about what it is that he’s experienced, what he’s going through, and to see if there’s anything that can be provided inside of Monroe County to help.”

7 takeaways from Bills’ Return of the Blue & Red scrimmage