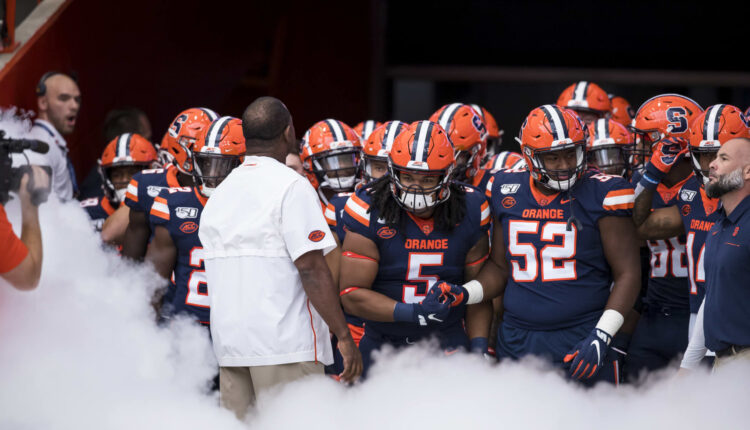 Consensus 2023 three-star offensive lineman Naquil Betrand, who has Syracuse football among his finalists, has pushed back his commitment announcement by a week, he said on Twitter.

The 6-foot-7, 310-pound Betrand says that he now plans to announce his college destination on Saturday, August 6. Previously, he was eyeing a decision on Saturday, July 30.

Orange coaches offered a scholarship to Betrand back in April, and he has taken both an official visit and an unofficial visit to the Hill.

Due to some issues I will be pushing my commitment back a week sorry for the inconvenience everybody invited come show love pic.twitter.com/KgPAQKsCxT

Not too long ago, Betrand revealed a top six of Syracuse football, Texas A&M, Kentucky, Penn State, Auburn and Georgia, which is the defending College Football Playoff national champion.

Syracuse football will soon find out if it has prevailed for 2023 three-star OL Naquil Betrand.

When I penned this column late Thursday, I saw two predictions for Kentucky in Betrand’s recruitment on the On3 Web site, each of which had a confidence level of 60 percent.

I always say to take these sorts of projections with the proverbial grain of salt, but at the same time, with two made in Kentucky’s direction, I imagine that the Wildcats are a big contender for Betrand.

SyracuseOnSI publisher Mike McAllister recently noted that Betrand made trips to four of his six finalists, but he did not visit Texas A&M and Georgia.

It certainly appears that the ‘Cuse has a good chance at winning the sweepstakes for Betrand, who is one of the top offensive linemen across the country in the 2023 cycle.

At offensive tackle, Betrand is rated as high as No. 39 nationally by ESPN. Given all of the struggles that Syracuse football has possessed on the offensive line in recent seasons, if the Orange could get a commitment from Betrand, that would prove huge.

Betrand suited up as a junior for Northeast High School in Philadelphia, although recent media reports said that he will spend his senior year at the powerhouse Saint Frances Academy in Baltimore.

As we’ve noted in the past, the Saint Frances Academy was one of the top football teams nationwide on the high-school circuit in 2021, and analysts have said that they anticipate the Panthers will be ranked in the top-10 overall prior to the 2022 campaign commencing.

Betrand, who has acquired more than 20 scholarship offers throughout his recruitment, had given a commitment to Colorado in March but then elected to reopen his recruitment back up.

We’ll certainly monitor what transpires once Betrand makes his college choice known in the near future.