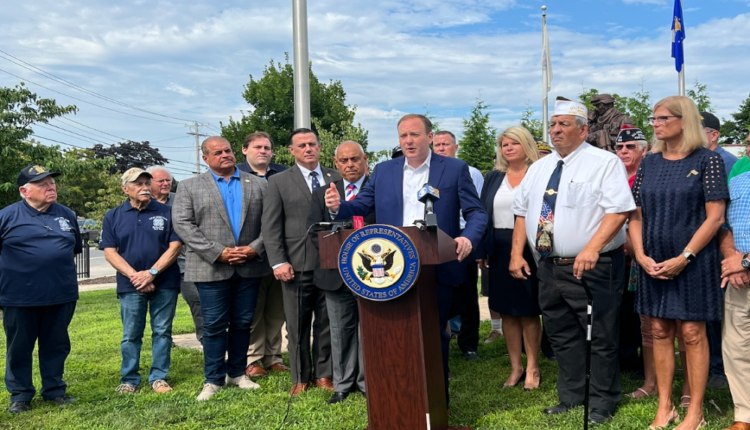 LONG ISLAND, NY — After being attacked at a campaign event in July, Rep. Lee Zeldin is advocating for a nationwide expansion of a program to help veterans battling with post-traumatic stress disorder and traumatic brain injuries.

Zeldin, of Shirley, himself a United States Army veteran, was joined by state and local legislators from Suffolk County, members of his veterans advisory board, and other local veterans and veteran advocates to call for a nationwide expansion of the PFC Joseph P. Dwyer Veteran Peer Support Program, a peer-to-peer support initiative for veterans suffering from post-traumatic stress disorder and traumatic brain injury.

The event was held Friday in front of the PFC Joseph P. Dwyer statue at Rocky Point Veterans Memorial Square.

Zeldin’s proposal, he said, would expand the Dwyer Program nationally and help veterans across the United States “receive the care, treatment and support they need and deserve.”

The bipartisan legislation has nearly 40 cosponsors in the House of Representatives and the backing of 14 veterans advocacy groups, he said.

At a rally on July 21, the congressman was attacked by David Jakubonis, 43, of Fairport, a veteran who is struggling with mental health issues, Zeldin said.

Jakubonis was released on his own recognition immediately after his initial arrest “without any time or effort allowed to deal with his mental health issues,” Zeldin said.

Zeldin was attacked when Jakubonis climbed on stage and attempted to stab him, Zeldin said at the time. A video shows the man grabbing Zeldin’s arm.

According to a release from the Monroe County Sheriff’s Office in Perinton, NY, Zeldin was onstage giving a campaign speech at the Veterans of Foreign Wars Post 8495 at 300 Macedon Center Road, in the town of Perinton. A man from the crowd climbed up on the stage and approached Zeldin, the sheriff’s office said. The man had a weapon in his hand, swung it toward Zeldin’s neck, and told him, “You’re done,” the sheriff’s office said.

A report in the New York Post said the man was actually holding what appeared to be a plastic keychain fob.

The Dwyer Program’s peer-to-peer support model for veterans has been proven to be effective at preventing tragedy and has helped returning service members throughout New York gain the support they need, Zeldin said.

“The stories of Joseph Dwyer and so many veterans who sacrificed so much only to come home and continue enduring the trauma they experienced overseas, inspired me to create the PFC Joseph P. Dwyer Veteran Peer Support Program while serving in the State Senate,” said zeldin. “I have no doubt that, if expanded nationally, the Dwyer Program would help prevent tragedies caused by the mental wounds of war and serve as an essential and life-saving resource for veterans returning home and their families across the United States.”

Zeldin created the Dwyer Program during his time serving in the New York State Senate in honor of PFC Joseph Dwyer, an Iraq War veteran from Mount Sinai who lost his battle with PTSD, he said.

Suffolk County served as one of four test counties in New York in 2013, the first year of the program, and since then the program has expanded statewide, Zeldin said.