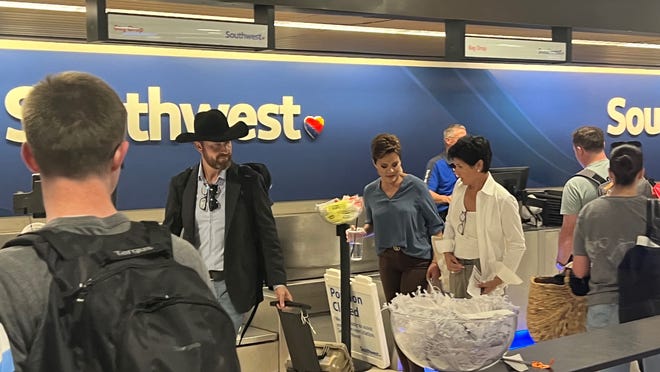 The race for Arizona governor is set: Democrat Katie Hobbs will Republican Kari Lake in what likely is one of the highest profile gubernatorial matchups in the US this November.

Election Day is Nov. 8, and early ballots will land in voters’ mailboxes about a month prior.

The Governor’s Office is the top elected position in Arizona. The governor leads the state’s executive branch, which implements laws and policies and overseas state agencies and depart. At the start of each year, the governor proposes a budget and during the legislative session signs or vetoes the myriad bills passed by lawmakers.

The governor appoints justices to the Arizona Supreme Court and other lower courts and chooses members of the Arizona Board of Regents.

Another power is the issuance of executive orders. That practice was common, and often controversial, during the COVID-19 pandemic.

The Arizona Republic and azcentral.com will provide extensive coverage of the race, along with other elections in Arizona, throughout the campaign. Here’s what to about the candidates and the job they seek.

Race to November: 5 things to watch for in Arizona’s governor race

Hobbs, 52, is Arizona’s secretary of state. Her job duties include overseeing elections and business registrations, as well as running the state library, which catalogs the official history of the Grand Canyon State.

Prior to election to the statewide office in 2018, Hobbs served for eight years in the state Legislature. She was elected to a leadership position in the state Senate in 2014.

Hobbs is a first generation Arizonan who grew up in a working class family in Tempe. She has been married for 26 years ⁠— her husband is a child therapist ⁠— and they have two adult children, a 23-year-old son and 20-year-old daughter.

She holds bachelor’s and master’s degrees in social work from Northern Arizona University and Arizona State University, respectively, and began her career in behavioral health and then handling contracts and lobbying work for the Sojourner Center, one of the nation’s largest domestic violence shelters.

Lake, 52, worked at Phoenix’s Fox 10 news for 22 years before ending her career in early 2021, with most of that time anchoring the nightly news alongside John Hook.

Prior to joining Fox 10 she briefly worked in Albany, New York. A native of Iowa, she was the youngest of nine children and daughter of a public school teacher.

She studied journalism at the University of Iowa moved to Arizona and started her career in journalism at 12 News as a weekend anchor in her late 20s.

That’s where she met her husband, to whom she has been married 24 years. They have two children.

Previous coverage from The Republic

Want to catch up on our reporting on these candidates from the past year? We’ve got you covered. Some articles reference candidates that ran in the primary election, but will not be on the ballot for the general election. Check them out:

► Who is Katie Hobbs? 4 things to know about the Democratic governor nominee

► Hobbs’ defense of 2020 election puts her in spotlight, despite campaign missteps

► As primary tightens, Lake alleges ‘stealing’ has occurred in election, offers no proof

► Candidates for governor — and one in particular — smash records for spending

► Where the candidates stand on abortion law after overturning of Roe v. calf

► ‘She’s thrown away my friendship’: Drag queen calls out Kari Lake for hypocrisy

► What do GOP and Democratic candidates propose for the future of education?

► What would Republican candidates for governor do to secure Arizona’s border?

► Where candidates for governor stand on Arizona audit, 2020 election