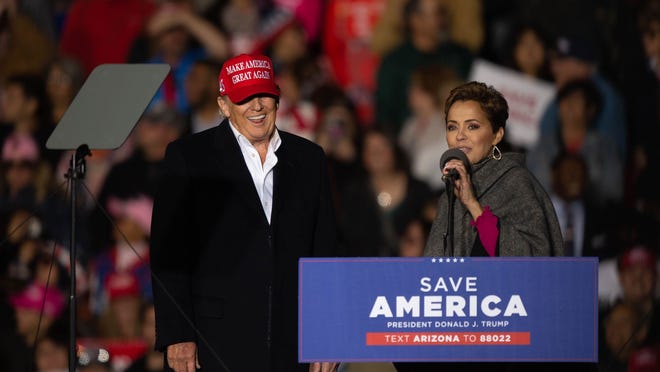 Lake is a political newcomer who bested a pack of other GOP candidates by promising to reform election systems in Arizona and to secure the southern border. She won former President Donald Trump’s endorsement and though she has no history in politics, Lake entered the race well known among voters after appearing in their homes on the nightly news.

Ducey has hit a two-term limit and cannot run again, meaning voters will choose the state’s next governor in November’s general election.

Who is Kari Lake?

Lake, 52, worked at Phoenix’s Fox 10 news for 22 years before ending her career in early 2021, with most of that time anchoring the nightly news alongside John Hook.

A native of Iowa, she is the youngest of nine children and daughter of a public school teacher. She studied journalism at the University of Iowa before moving to Arizona and starting at 12 News as a weekend anchor in her late 20s.

That’s where she met her husband, to whom she has been married 24 years. They have two children.

Lake worked briefly in Albany, New York, before joining Fox 10’s news team, where she built her career and familiarity among Arizonans. While there, she interviewed then-Presidents Barack Obama and Trump, pinnacle interviews for any journalist.

And they’re off:Lake, Hobbs start their campaigns for governor

How did Kari Lake get into politics?

The former television anchor has not run for office before. In a video announcing her departure from Fox 10, she said she was no longer proud to be a journalist and felt like the media was driving “fear and division” in the country.

Three months later, she announced she was running for governor, pledging to put “Arizona first.”

Lake has portrayed herself as a change agent who will tackle the state’s toughest issues. “The status quo isn’t working,” she has told The Arizona Republic. “I’m focused on delivering the transformative leadership we need to tackle those challenges head on.”

Who is Kari Lake’s opponent for Arizona governor?

Hobbs handily won the Democratic nomination for governor on Aug. 2. Hobbs lives in Phoenix with her husband, and they have two adult children.

A former social worker and advocate for domestic violence victims, Hobbs served eight years in the Arizona Legislature before she was elected secretary of state. Her job duties include overseeing elections and business registrations, as well as running the state library, which catalogs the official history of the Grand Canyon State.

Who is running?:What to know about Arizona’s candidates for governor

Where does Kari Lake stand on key issues?

Lake has said Trump won the 2020 election in Arizona, despite no evidence supporting the claim, and has said she would not have certified Biden’s election if she were governor at the time.

She has pledged to clean voter registration rolls, stop ballot harvesting and has gone to court to argue for ending the use of electronic voting machines and limit voting to in-person on Election Day, instead of using mail-in ballots.

She wants to flood the southern border with law enforcement to keep an “invasion” of migrants at bay and is the only Republican candidate to pledge to work to combat homelessness, offering a plan that provides more resources but also threatens criminal penalties.

She wants to ban critical race theory, which for some has become an umbrella term for curriculum that teaches about systemic racism, boost teacher pay by offering performance bonuses, and implement the Hillsdale 1776 curriculum, which was deemed as conservatives’ response to teachings like The 1619 Project, which examined American history through the lens of slavery.

On abortion, Lake’s campaign has said she is “pro-life but supports exceptions for rape, incest and life of the mother.”

What are Lake’s controversies?

Lake’s departure from Fox 10 followed several controversies, including once when she used an expletive on camera and another in which she alleged the “Red for Ed” push for more education funding was a secret effort to legalize marijuana. It wasn’t.

Her past has received wide scrutiny since she entered the race for governor, and her opponents and the news media have drawn contrasts between Lake the journalist and Lake the candidate.

‘Democracy is on the ballot’:How TV news covered the Arizona primary

She also claimed she was a life member of the National Rifle Association, although she refused to provide proof of her membership prior to 2021.

Along the campaign trail, several tactics have prompted scrutiny, including her using donated dollars for routine expenses and putting her husband and daughter on the payroll.