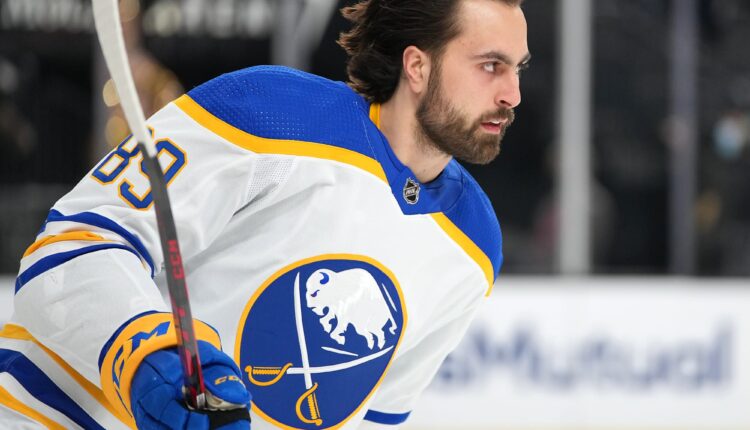 Buffalo Sabers winger Alex Tuch has enjoyed decent outings. But he still has yet to truly break out. Is 2022-23 his year?

Alex Tuch is understandably a fan favorite on the Buffalo Sabers. A local product, Tuch’s arrival in the Jack Eichel trade got the Sabers faithful talking, but his on-ice play was also promising as he became a regular fixture on the team’s first and second lines.

But, to be honest, Tuch’s season was not stellar. It showed a lot of upside, however, as he logged 0.76 points per game, the highest of his career. So notched a career high in average total on ice time at 18:25, over 1:30 more than his previous high of 16:50.

Tuch’s 26 assists jumped out at me more than any other statistic. With just an 8.6 shooting percentage, he wasn’t the best scorer on the team. But having logged 0.52 assists per game, it shows you where he can be ultra-dangerous. Even if Tuch never evolves into an elite scorer, I would expect between 45 and 55 assists per season while he remains in his prime.

He did, however, record more shots on goal per game than in any other time in his career, with 2.78, which shattered his previous high of 2.58 that he set in 2020-21. Given his performance last season, some have called it a breakout year, but it was a good, solid season that has yet to place Tuch into the upper-echelon of NHL forwards.

Therefore, it was a step toward a breakout. But at this point, I can hardly claim that Tuch officially turned heads outside the Queen City. Give me at least 70 points, 45 assists and 25 goals to match. That’s a breakout season. And given Tuch’s numbers in 2021-22, the above should be attainable.

While the COVID-19 pandemic did not help, Tuch has also not played in over 70 games since 2018-19. So for a breakout to truly occur, he would also need to reach the 70-game threshold.