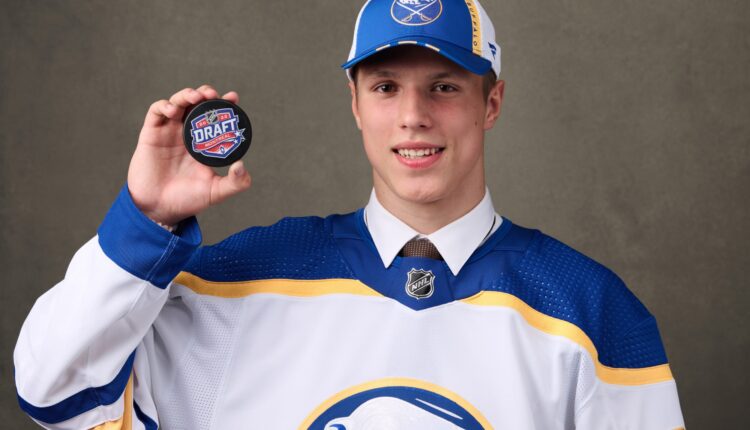 The most curious case from the Buffalo Sabers 2022 NHL Draft is Jiri Kulich, because there is a chance that he will play in North America.

Where will 28th overall pick Jiri Kulich play in 2022-23? After signing his entry-level contract at Buffalo Sabers development camp, Kulich’s immediate future is wide open. Though there is a chance he plays the 2022-23 season in Czechia, Kulich could also wind up on the Rochester Americans or even play in the QMJHL.

As of August 3rd, 2022, there is no clear-cut answer to Kulich’s immediate future regarding the Sabers plans for him. But instead, the Sabers will most likely decide where Kulich will play next season based on where he would have the best development opportunity. It could be very well in Rochester, or it may be in Extraliga (Czechia’s top pro league).

There is a chance that fans of the Buffalo Sabers will watch Jiri Kulich play for the Rochester Americans in 2022-23.

If you check out Kulich’s profile page on Elite Prospects, it shows that he is most likely going to play in Czechia, once again for HC Energie Karlovy Vary. But placing Kulich in Rochester could help spur his development in North America, though I find it highly unlikely he will play in the QMJHL.

Overall, it depends on whether the Sabers are comfortable with placing him in the AHL in favor of a veteran. However, it is also possible the Sabers would rather see key veterans take up the remaining spots in Rochester, since there is no way Kulich is ready to help out in the NHL this season.

If the Sabers go the veteran route, they could immediately employ these veterans in the NHL in the event that the injury bug strikes again. So overall, there are more questions than answers right now regarding Kulich.

On one hand, bringing him to North America and inserting him into the AHL would give him valuable experience and development. But on the other hand, the Sabers would keep him out of the NHL for most of the season until the final few games. We will learn more regarding Kulich’s situation as the season approaches.

Article source: Sabers Mailbag: Why Patrick Kane isn’t a fit for Buffalo … not now, at least by Lance Lysowski