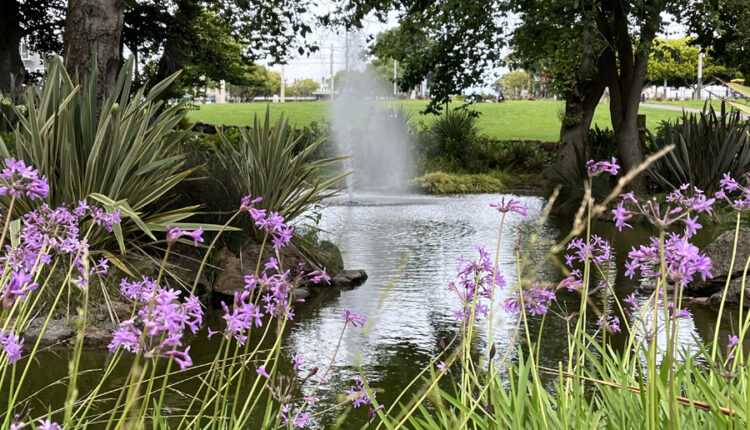 Alvord was born on Jan. 3, 1833, in Albany, New York. He studied at Albany Academy and worked in a hardware store in New York City before moving to California in 1853. He ran his hardware firm Alvord & Co. in San Francisco from 1857 until 1867, the year he became president of the Pacific Rolling Mill Company .

When the Bank of California incorporated in 1864, Alvord was a shareholder. The year 1871 was big for Alvord; he not only became a director of the bank and president of the San Francisco Art Association, he was also elected mayor of San Francisco. In 1873, he lost re-election for mayor, but was appointed to the Board of Park Commissioners in charge of Golden Gate Park.

Alvord Lake has graced the eastern end of Golden Gate Park since the 1880s. Near the intersection of Haight and Stanyan streets, it is often the first park feature seen by visitors. Photos by Michael Durand.

In 1880, the Park and Ocean Railroad company planned to install a steam train line to bring San Franciscans to Ocean Beach and requested a 50-year lease for railroad easements in the park. The Park Commissioners denied the request; Alvord recognized that the state ordinance establishing the park put a three-year limit on any park lease.

In 1882, when the president of the Board of Park Commissioners was traveling away, Alvord was made the temporary president (pro tempore) of the board. Alvord gave $200 for a lily pond in Golden Gate Park, according to the 1882 Report of the Park Commissioners. A ceremony to name the pond “Alvord Lake” was held when Alvord was out of town; he actually wanted to name the pond “The Lakelet,” according to historian Raymond H. Clary.

Alvord was married to Mary E. Keeney from 1884 until her death on May 23, 1903. Alvord had two stepsons from Mary’s first marriage.

Alvord died on Dec. 21, 1904, at age 71 in San Francisco. He had served as Bank of California’s president from 1878 until his death. (He became that bank’s vice president in 1875.) Alvord was a Police Commissioner of San Francisco from 1878 to 1899 and presided over multiple civic organizations. The National Cyclopedia of American Biography of 1904 and a San Francisco Call obituary described Alvord’s life.

The engineer for the Alvord Lake Bridge adjacent to Alvord Lake, Ernest L. Ransome, came from a family of cast iron manufacturers. He was born in England in 1844 and apprenticed under his father. The father had a patent on making artificial “cast stone” with a special concrete mix.

Ransome moved to San Francisco in 1870 and worked in construction companies. Ernest was granted his own patent in 1884 for re-enforcing concrete with more effective steel rebar – small, twisted pieces of metal embedded inside concrete. Ernest formed the company Ransome & Cushing with Sidney B. Cushing in 1889, according to historian Stephen Mikesell’s article on Ernest Ransome’s career.

Alvord Lake Bridge is a single arch, 64 feet wide with a 29-foot-long span. Built in 1889, it is the oldest known reinforced concrete bridge built in the United States. The bridge’s concrete was reinforced by Ransome with square steel bars twisted “cold,” at room temperature while the steel is solid, not molten. Ransome wrote about how he twisted two-inch rods using manual power by modifying the crank mechanism in one of his cement mixers. The bars were bent following the curve of the arch and embedded, helping the bridge survive the 1906 earthquake. The bridge is part of a split-level crossing; Road traffic crosses the bridge from north to south (and back) over a west-east pedestrian tunnel letting park visitors walk between the Haight Street park entrance and the Children’s Playground. The stalactites hanging from the pedestrian tunnel ceiling are artificial, maybe to simulate a cave, according to Daniel L. Schodek, a late faculty member of Harvard’s Graduate School of Design.

The walkway that connects Alvord Lake with the Children’s Playground area in Golden Gate Park is a visual treat with man-made stalactites hanging from the top of the cave-like tunnel. The traffic above, on Kezar Drive, which connects Oak and Fell streets to Lincoln Way, drives over a bridge built in 1889. It is the oldest reinforced concrete bridge in the United States.

An example of another project of Ransome & Cushing involving the patented rebar is the California Academy of Sciences (then at Market and Fourth Streets). Ransome died on March 5, 1917 at age 73.

The president of the American Society of Civil Engineers, Jack McMinn, and national director Lauress L. Wise, presented a plaque designating Alvord Lake Bridge as a National Civil Engineering Landmark to San Francisco Supervisor Terry Francois on July 18, 1970, according to the San Francisco Examiner. The plaque is above the pedestrian tunnel’s west entrance. Near the tunnel is the work of the Stanyan Edge Project completed in fall 2020 which gave the Haight Street entrance to the Park more accessible sidewalks and landscaping with funding from the Clean and Safe Neighborhood Parks Bond approved by San Francisco voters in 2012.

Alvord Lake is 200 feet west of an entrance to the Park at Stanyan and Haight streets. A few yards west of the lake is the Alvord Lake Bridge. The pedestrian tunnel underneath Alvord Lake Bridge is easiest to find from Alvord Lake; some trails from other directions lead walkers to the top of the bridge where there is no designated pedestrian crosswalk across busy Kezar Drive. 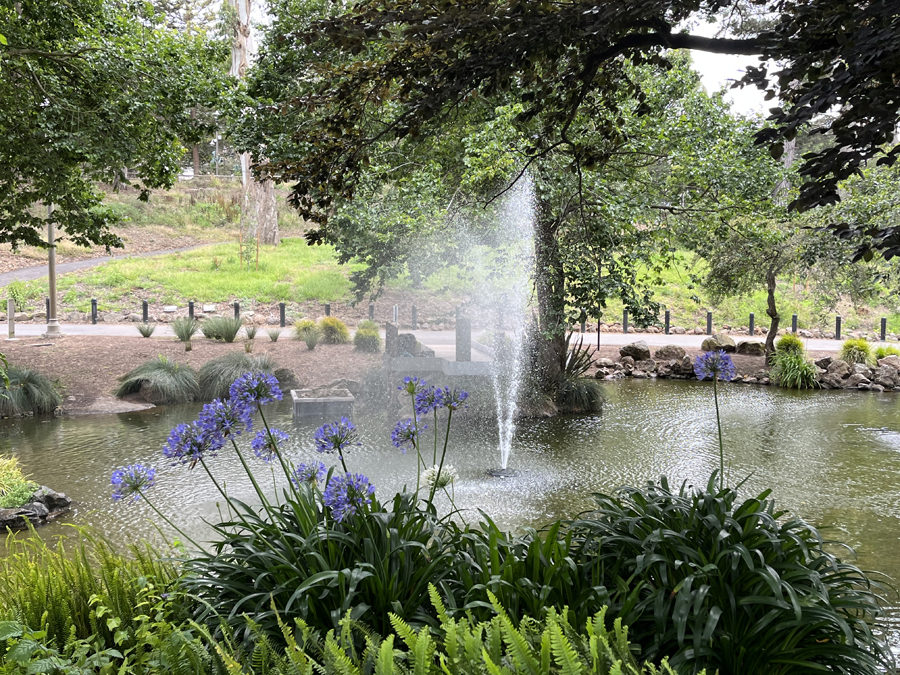 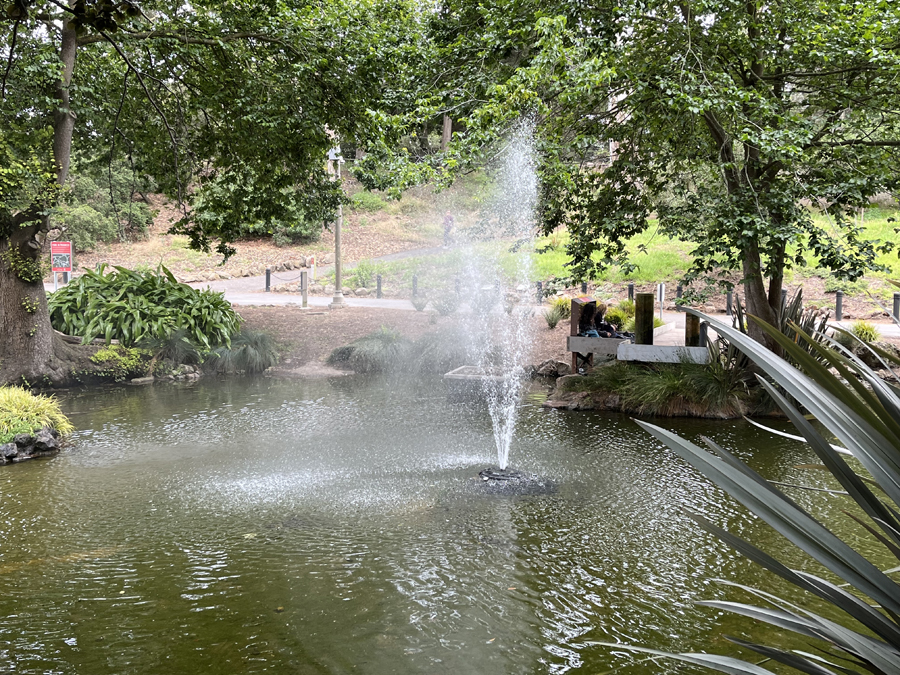 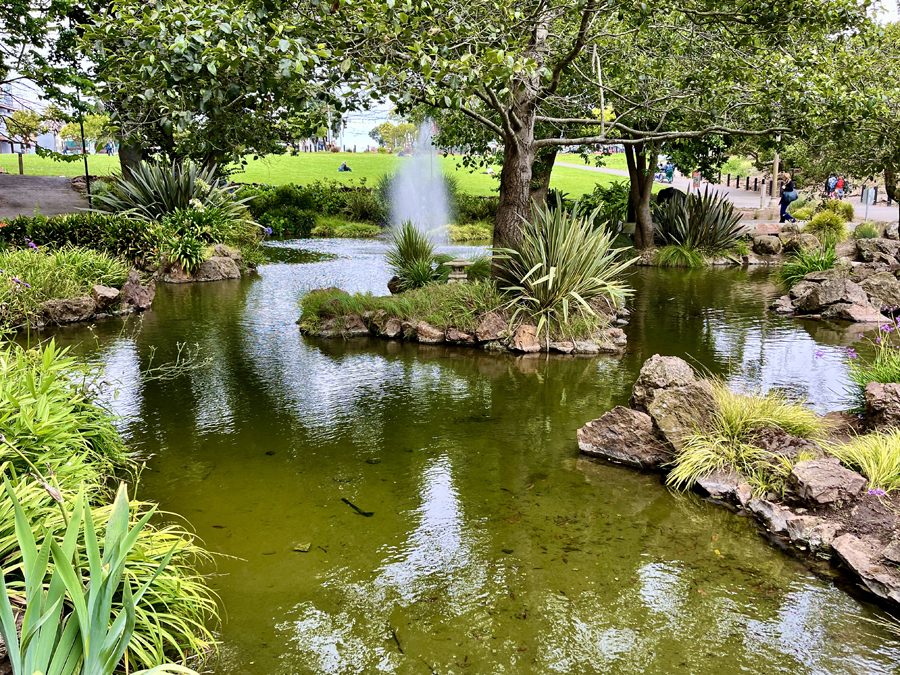