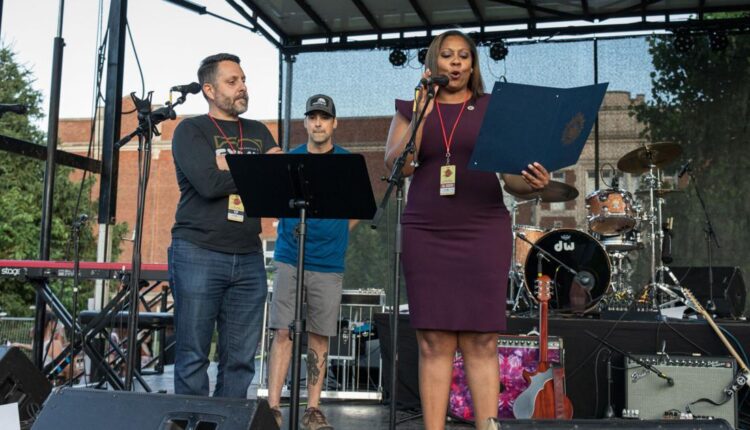 Metro Councilmembers Joy Styles and Jeff Syracuse recently traded barbs over a hypothetical Nashville Entertainment Commission, a 15-member body proposed by Styles to advocate for the city’s creative industries. Both have been outspoken defenders of Nashville’s music scene. But they differ on how Metro can help venues, songwriters, musicians and the city’s film industry.

Syracuse confirmed to the Scene on Tuesday that he plans to run for an at-large seat on the Metro Council in 2023. Next year he’ll finish his second term representing District 15. He cites Nashville’s threatened music industry as a major driver for his decision to stay in local government.

“I’ve spent 25 years fighting for composers, songwriters and publishers in this industry,” Syracuse tells the Scene. “There is a need for somebody at the local level to be advocating for the working creatives, the industry and the economic impact that makes for the city.”

Mayor John Cooper shouted out both Styles and Syracuse during his State of Metro Address in April, when he announced the creation of a new Metro Office of Music, Film and Entertainment. The mayor’s office did not return a request for comment in time for publication.

The Metro Office of Music, Film and Entertainment hasn’t yet taken shape, leaving Styles and Syracuse to chart their own paths forward. Both bristle at the increasing perception that Nashville has grown hostile to the creative culture that gave the city an international reputation. Corporate monopolies continue to consolidate every aspect of the music industry, from venues to ticket sales to streaming, as the city’s unaffordability and real estate bonanza make independent creative ventures less viable. When new ownership is jeopardized the future of the Exit/In, Syracuse and Styles took central roles advocating for its preservation. The iconic Elliston Place venue is only booking shows through Thanksgiving, the end of their current lease.

Both council members have careers in the music industry — Syracuse at BMI and Styles as an artist — and both see a lane for Metro to help. Styles criticizes Syracuse for spending seven years working on a solution with nothing to show for it, resulting in a politically motivated territorial response to her push for a new commission.

“He has deemed himself the king of all things music, assuming he can make declarations about how anyone else interacts with the music industry, and he’s incorrect,” Styles tells the Scene. “It’s very petty, and it’s very selfish and it’s very egotistical. I think it’s very much connected to whatever personal ambition he has beyond the end of this term.”

Syracuse sees Styles’ bill as her attempt to hijack years of preparation — including wide-ranging stakeholder buy-in that, according to Syracuse, has been underway since Mayor Karl Dean’s administration.

“Out of the blue, she files this entertainment commission, a 15-member politically appointed body without engaging anybody in the music industry,” Syracuse says. “I wish that she would collaborate. I have offered for her to be part of the process I’m doing to engage the music industry.”

The two exchanged harsh words at a Metro Budget and Finance Committee meeting Monday night. Styles referred to Syracuse’s floor speech as a tantrum. Syracuse started his remarks with a categorical dismissal of Styles’ lawmaking.

“Where to begin?” Syracuse asked the committee on Monday. “The sponsor has a pattern now: legislate first, ask questions later.” He referred to Styles’ approach as asinine. “How can you possibly pass a piece of legislation that has zero engagement with the most important industry in this city?”

Styles tells the Scene that her legislation is an answer to calls from constituents and the music and film industries for the city to step up. “There is a gap in this city in terms of how entertainment has been treated,” says Styles. “We know we are Music City and we need to be listening.”

Styles’ bill to create the Nashville Entertainment Commission is up for second reading tonight. It has been deferred twice. Council member Robert Swope has proposed a hostile substitutewhich recategorizes the commission as a board and reduces its size to nine.