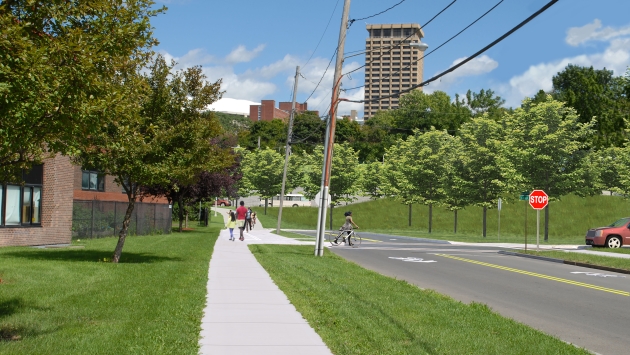 This story assembles the entire Five-part interview into one post. (Click on the corresponding links below to view section desired)

Urban CNY News is pleased to bring you the final installation of my interview. This was an 11-minute discussion/interview with Syracuse Mayor, Ben Walsh.

As previously stated, there were several questions asked during our meeting, regarding the appropriation of funds from the American Rescue Plan aka ARP funds. In addition, we asked; What are we doing about Youth Employment and Housing? The City’s Justice Agenda; The Construction Boom at Syracuse; and there’s a conclusion regarding “Challenges” moving forward.

In part 1Mayor Walsh detailed American Rescue Act Plan funding and how the disbursement of these funds developed in partnership with the Syracuse Common Council.

part 2 Mayor Walsh – What are we doing about Youth Employment and Housing?

part 3 Mayor Walsh Topic: Could you tell us about the Justice Agenda and progress towards that goal?

part 4 The Construction Boom at Syracuse

“The challenges that we face here in Syracuse in 2022 are largely the challenges that we have faced for decades. We have far too high poverty in this community, and it is concentrated poverty, both geographically and racially. Related to poverty, we do have significant issues related to racism and segregation again, these are systemic problems that we are facing head on.

But again, it’s systemic so it really requires us not to just change who’s sitting around the table, and we’ve worked very hard to make sure that those that are around the decision-making table do reflect the diversity of our community. But also, to make sure that we’re changing the systems that are in place, so long after I’m gone, or Deputy Mayor Owens is gone, or anyone that is currently in city government, we’ve made meaningful change.

But again, we need to lift more people out of poverty. We need to create more neighborhood stability and economic opportunity in all of our neighborhoods in the city, not just some, but again these aren’t new challenges, they’ve been around for a long time.

The same could be said for crime, we have far too much gun violence in our city, it is disproportionately impacting our young people that are growing up, being traumatized directly and indirectly from this violence. So, we need to continue to make progress there as well and give our young people an opportunity to succeed.

So, the problems are many, but we are not letting that detract or deter us from continuing to make progress towards that vision of the goal is again. To make systemic change, so we ensure that we continue to move forward, towards that vision for years to come.

The following links are to the various tools put in place by the city to be “transparent” about where these funds are being allocated.

Buffalo History Museum hosts ‘Party on the Portico’ this Friday