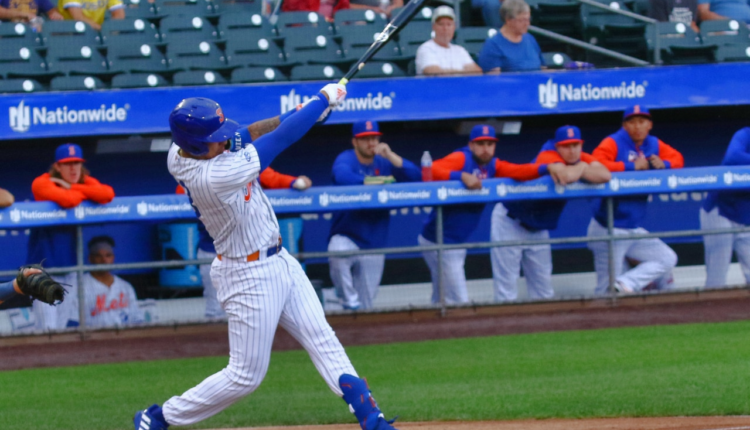 Early on, the parade to home plate began when Syracuse (38-48) plated three runs in the bottom of the first inning to grab a 3-0 lead right away. After a Nick Plummer single and a Francisco Álvarez fielder’s choice, Álvarez was standing at first with one out. Then the fun began. Four straight singles by Daniel Palka, Mark Vientos, Travis Blankenhorn, and Khalil Lee scored two runs and had the bases loaded with one out. A Jose Colina RBI groundout would make it 3-0 and eventually complete the frame’s scoring. Impressively, all five of the Mets hits in the inning were either to the opposite field or hit up the middle.

Jacksonville (46-40) roared back to tie the game in the top of the second inning with three runs of his own. The Jumbo Shrimp did it via what would become a recurring theme in this game: the long ball. Charles Leblanc slugged a two-run home run, followed by a solo shot for Ryan Lavarnway later in the inning to make it a tie game, 3-3, in a flash.

The Mets pulled right back in front of the bottom of the second, as they scored four runs of their own while playing long ball. With Álvarez and Palka standing on base with two outs, Vientos smashed a no-doubt, three-run shot over the right-field fence to give Syracuse a 6-3 advantage. The 22-year-old has gone 4-for-9 in the first two games of the series and is now tied for the team lead with 16 home runs on the season. Blankenhorn followed with a home run of his own that he pulled down the right-field line to push the Syracuse advantage to four, 7-3.

The home run derby at NBT Bank Stadium wouldn’t stop in the top of the third, as Willians Astudillo smacked a solo shot on the first pitch he saw in the first at-bat of the frame to trim the Mets edge to three, 7 -4. Astudillo has already had a very productive week in Syracuse, going 5-for-10 in the first two games with two doubles, two home runs, and three runs scored.

The Jumbo Shrimp did it again in the top of the fifth, utilizing a two-run shot from JJ Bleday to slim the deficit to just a run, 7-6. Bleday, the fourth overall pick in the 2019 draft out of Vanderbilt, has homered twice this week and ranks second in the International League this year with 19 home runs.

The Mets pushed their lead back to two runs in the bottom of the fifth when Khalil Lee lined a laser-beam, solo shot over the left-field fence to make it an 8-6 Syracuse advantage.

The home team put the game away with three runs in the eighth. It all started when Lee hit the final home run of the night, a majestic solo shot over the fence in right-center field for a 9-6 Mets advantage. It was the first two-homer game of the season for Lee. After a Colina groundout, Syracuse tackled on some more insurance. Deven Marrero walked, Johneshwy Fargas singled, and Plummer singled to drive in Marrero for a 10-6 Syracuse lead. Later in the inning, Fargas scored on a wild pitch to give the Mets their largest lead of the game, 11-6.

On a night where offense grabbed nearly all the headlines, the Mets relievers did close the evening strong. Eric Orze, Yoan López, and Bryce Montes de Oca combined to work the final four innings of the game in scoreless fashion with four strikeouts. In its last 20 innings of work, Syracuse’s bullpen has fanned an amazing 33 opposing batters in the past six games.

Syracuse continues its series against the Triple-A affiliate of the Miami Marlins, the Jacksonville Jumbo Shrimp, on Thursday night. Right-hander Jacob deGrom is slated to start for the Mets on a Major League rehab assignment, opposed by right-hander Bryan Hoeing for the Jumbo Shrimp. First pitch is set for 6:35 pm