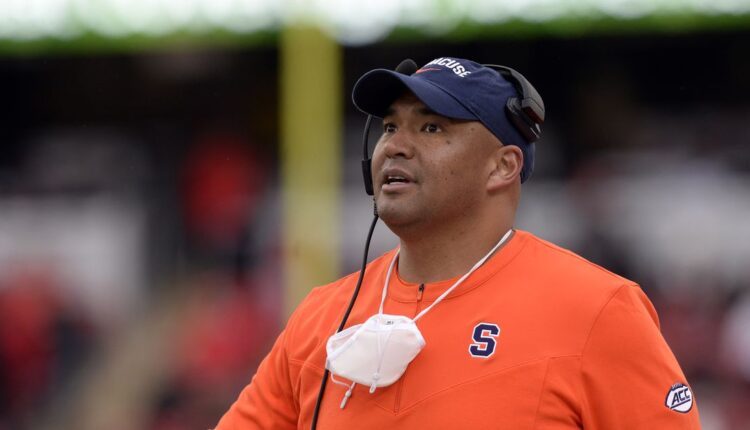 Syracuse Orange fans have been very pleased with the performance of defensive coordinator Tony White. His work has certainly been noticed outside of Central New York as White was named one of 45 minority coaches to watch by ESPN.

Here is what they said about White:

There’s some urgency around Syracuse, which needs to show improvement in this case, but White’s overall profile makes him appealing as a potential head coach. He worked on both coasts and came up in the Rocky Long system (New Mexico, San Diego State) before becoming a coordinator at Arizona State in 2019. White, who is Black and Korean, oversaw a top-20 Syracuse defense last season.

The list was based on input from people within the industry and was comprised of coaches who project as potential head-coach hires in the next seven years. White was grouped among other Power 5 coordinators which included the coach who briefly preceded him at Syracuse, Zach Arnett. Former Syracuse assistant Mike Hart who is now at Michigan is also named as a coach to watch.

White can certainly raise his stock again this fall if he can develop a scheme to support an inexperienced defensive line and continue to find ways for players like Mikel Jones and Garrett Williams to shine for NFL scouts.

Syracuse fans might have to brace for White’s departure in the near future but let’s hope it’s due to him taking a head coach job and not because the Orange are bracing for a coaching staff overhaul under new leadership.

Ann Arbor chief to lead police in Boston, where he once was beaten by fellow cops

NYPD Walks Back Decision to End of Marijuana Testing for Officers