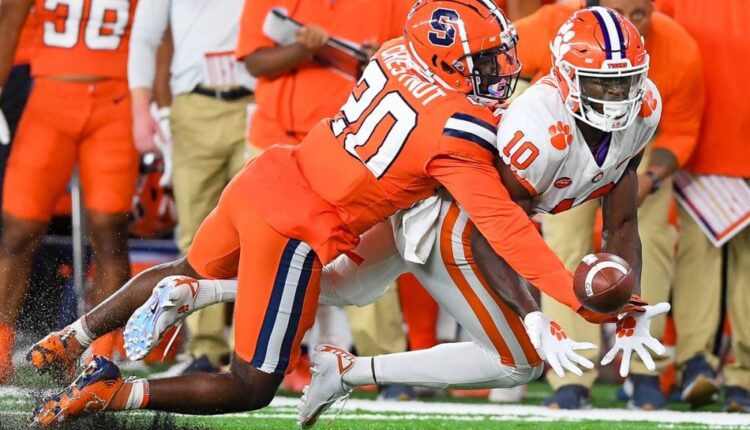 It’s the third of a multi-part installation into what will make Syracuse football have a successful 2022 season, after disappointing years the last three. Since winning double-digit games in 2018, Dino Babers’ program has won only 11 games in the past three seasons combined. That is not anywhere close to good enough.

But, that is no fault of the defense, specifically the secondary, which has been terrific. With recent draft picks Andre Cisco and Ifeatu Melifonwu, and potentially more coming down the pipe, the secondary has shown out the last couple of years under Tony White.

Now, after Garrett Williams broke out as a star in 2020, and Duce Chestnut started on the outside as a true freshman in 2021, that duo is ready to take the next step and lead the Orange defense in 2022.

Williams has been labeled as a possible first-round pick next April if he has a great season, and even though his 2021 was not as good as his superb 2020, a good season this year will wash away all those doubts.

Chestnut burst onto the scene with an interception in week one, and other memorable moments throughout the season for SU, and when both of those guys were healthy, teams could not have as much success on the outside.

The depth of the unit has been a bit questionable, especially at safety and getting beat over the top, like when Sam Hartman and Wake Forest threw for 330 yards and three touchdowns, including two over 40 yards.

With Rutgers transfer, Alijah Clark entering the fold as well, the depth of the unit has been improved, and the cupboards are stocked with talent. Jahad Carter, Jason Simmons, and Rob Hanna are the other returners and know the system. They’ll be relied upon to make plays and make an impact along with the three stars.

The defensive backfield also has some new guys, like freshman Cornell Perry, Dom Foster, as well as transfer Baryln Oliver. These guys provide much-needed depth and can be thrown into game-action when called upon. Cornerback has been maybe the best-recruited position on this roster for the past half-decade, and that could be a huge impact on the 2022 season for Syracuse.

There are a lot of things that need to go right for Syracuse to be successful in 2022, but if the secondary shows out like everyone knows they can, it takes the pressure off the rest of the defense and makes a huge impact in every game this season.