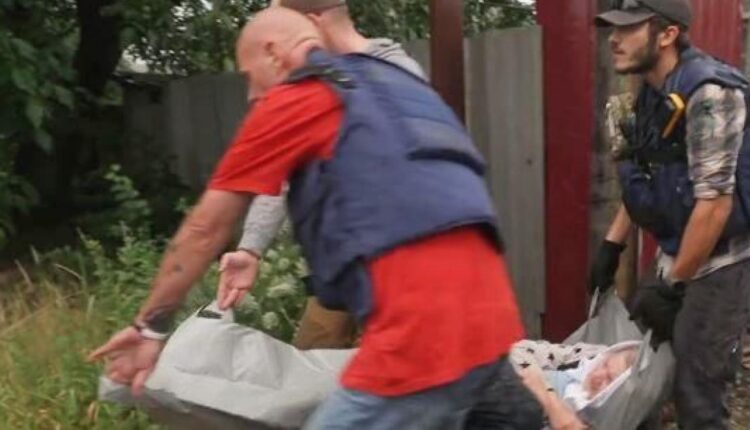 Chasiv Yar, Ukraine — Russia now controls a vast section of eastern Ukraine, and the thousands of people living in the towns and villages on the Ukrainian side of the front lines know the Russians are coming. As CBS News senior foreign correspondent Holly Williams reports, evacuation teams are racing to get the sick and the vulnerable out of the way of the invading forces and to safety before it’s too late.

Williams met a young American man who has put himself in harm’s way to help get civilians out of Ukraine’s embattled eastern Donbas region. Tony Demczar, 22, is part of the evacuation effort, and as Williams learned, his mission is only growing more urgent.

Natalia Abramova speaks with CBS News in the town of Chasiv Yar, Ukraine, just before evacuating from the city with her three sons as Russia’s invading forces draw nearer, in July 2022.

Natalia Abramova told CBS News that she’d already been forced to uproot her family and move twice as the fighting drew closer. Williams met her as she and her three sons were fleeing for their lives again, with what little they could carry.

“We’ve lost everything,” the mother said, breaking down in tears as she and her children loaded into a car. “We have nowhere to go.”

Later, Abramova told Williams that her husband was killed by shelling in May. Their town, Chasiv Yar, is in Ukraine’s eastern rust belt.

Many people in the region are desperately poor, but they’re standing in the way of Vladimir Putin’s invading army, which has appeared hellbent for weeks on capturing the entire eastern Donbas region. So, with a few bags and their family pets in tow, they’re leaving everything else behind.

Only about 15 miles from the front line in the raging battle, CBS News saw many people being evacuated who couldn’t physically move on their own.

At times, Williams and her team heard shelling in the distance as disabled and elderly civilians were bundled into vehicles to be ferried away from their homes and lives.

Two days before Williams and her team arrived, Chasiv Yar took a direct hit. Ukrainian officials have said at least 48 people were killed when a Russian missile slammed into an apartment building, razing half of it to the ground. Ukrainian officials called it just the latest “terrorist attack” by Russia.

Demczar, who is from Albany, New York and used to work in construction, Williams told he came to Ukraine to fight, but ended up deciding that he’s more useful helping civilians. Through the UK-based non-profit group RefugEase, Demczar became part of one of the evacuation teams working feverishly to get people out of towns like Chasiv Yar.

His father was born in Ukraine when it was still part of the Soviet Union, but he fled to America as a child.

He knows he could get very unlucky doing this work in a war zone.

“There’s danger everywhere,” he acknowledged, but he said he’d “rather die helping these people” than in his own bed as an old man, thinking, “my God, I could have done something, but I didn’t. “

Tony Demczar, 22, from Albany, New York (at right), helps other members of a rescue team move an elderly woman into a van to be evacuated from the town of Chasiv Yar, Ukraine, as Russia’s invading forces draw closer, July 2022 .

Many of the evacuation operations in the region are organized with almost military precision by a Ukrainian group called Vostok SOS.

“Those who we are evacuating are helpless, they can’t do it by themselves,” Dmitry Podzolkov, the organization’s logistics coordinator, told CBS News. He said the volunteers were desperate for more helmets and communications equipment to help them work in the danger zone, and more vans.

At a nearby station, CBS News watched as the mother boarded a train with her boys and a flood of other evacuees. They were just a tiny fraction of the millions of lives thrown into chaos and anguish by Russia’s invasion.