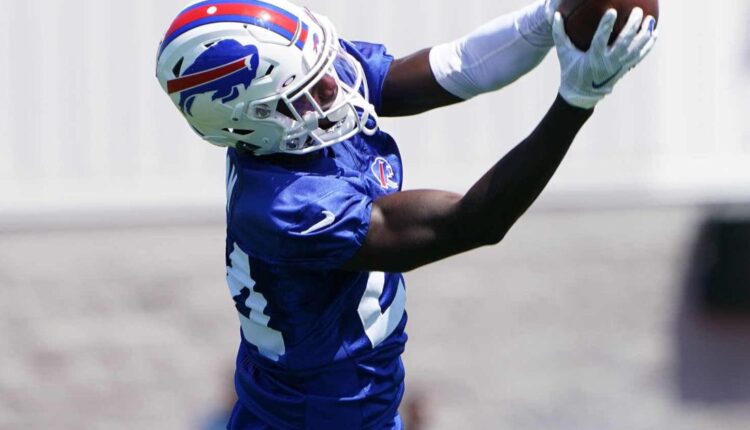 Hello, and welcome to this week’s Bills mailbag. Training camp is so close. Here’s what you’re wondering:

Alex M asks: When (cornerback) Kaiir Elam got drafted, he wanted the defensive playbook on the plane. I heard that they didn’t provide him one. Is it because he hasn’t yet signed a contract and they didn’t want their playbook leaked?

Katherine: It’s true that the team did not provide him with the playbook on the plane, but he got it the next day. I recognize that teams are (sometimes unnecessarily) paranoid about things, but this seemed to genuinely be a case of making sure he soaked in everything after being a first-round draft pick.

“We wanted him to enjoy it,” General Manager Brandon Beane said. “Take your time. It was great to get his family up here. We had obviously met Kaiir through the process, but great to meet mom and dad and brother. We’re excited. He seems very excited.”

Elam seemed understanding. He laughed the next day when we asked him about it.

“I knew I was going to get asked that question, but they didn’t, honestly,” he said. “They told me I’ll have plenty of opportunity to learn. But I think I got it today, though. I got it today. That’s all that really matters. Now I can strive to learn as much as I can so I can play fast and make plays and get the ball turned over for the offense to go score.”

I think this is great on both ends. Props to Elam for being so excited to learn. But it is also my firm belief that we’re all at our best when we have time to breathe, and it’s important in all workplaces to have work-life boundaries recognized from the top down. Props to Beane on letting the flight at its own moment.

Rob asks: What late summer free agents do you think Brandon Beane might have his eye on? Also, and this might be impossible to answer, any obvious early camp cuts from around the league that might end up in Bill’s camp? Maybe someone they wanted to sign post draft but signed elsewhere first.

Katherine: Right now, I don’t think they are likely to add anyone unless there is a notable injury during training camp. This roster is in really strong shape. Of course, any team will do due diligence to see what’s happening around the league, but relative to other seasons, the Bills are quite solid headed into camp.

Larry asks: With Rhea Seehorn finally getting an Emmy nomination for her incredible work, which Bills’ player is set for their spot in the sunlight?

Katherine: First, congrats to Rhea! I think Greg Rousseau is poised for a spot in the sunlight. I’m far from the only one tabbing him to be this year’s top candidate for a breakout. I just keep going back to how much of his potential may still be untapped, and the way his college career shook out, with so much production in so little time. I’m not trying to make this a “did you know Ryan Fitzpatrick went to Harvard?” level cliché, but I do think he has so much room to flourish with extended time with one team.

I also am interested to see what defensive tackle Tim Settle does in Buffalo. He was buried on the depth chart in Washington. Obviously, this Bill’s defensive line is loaded, so not everyone can break out all at once, and he may not see the same jump that Rousseau may make. Still, I think the new circumstances benefit him. And he has excellent energy – his introductory news conference was delightful.

Katherine: I’ll start by saying I gave heavy weight to sightlines here. End of the day, as long as the Wi-Fi lets me do my job, I’m pretty easygoing when it comes to stadiums. I’m always excited to go to new ones, so I will nitpick some to answer this, but overall, I love the opportunity to see so many.

SoFi Stadium (Inglewood, Calif.) is incredible. It felt like a spaceship, and I’m really looking forward to the season opener there. I don’t think a Jumbotron of that size makes sense at every stadium, but the way they used it at this past Super Bowl was really well done.

I also liked Raymond James Stadium in Tampa, Fla. I enjoy when anyone really leans into a theme, so having a 103-foot-long pirate ship is hysterical to me. I love that it’s just there for college games, with non-pirate-affiliated teams, and that they sometimes change the sails accordingly.

Nissan Stadium in Nashville, Tenn., is the closest I’ve ever been to the field in an NFL press box. The view was really great, and I was shocked when I walked in.

On the other end, Kansas City is maybe the highest up I’ve ever been in a press box. I feel like if I lean forward, I will fall off the face of the earth. It’s hard to see quite as well up there, relative to other stadiums, and feels a little more removed than I would like to be. Really solid food though.

The Superdome, I go back and forth on. There are no windows separating the press box from the stadium like most places, which does add the fun element of really getting a good feel for the atmosphere. It also means it’s freezing. I brought four layers to New Orleans. Control what you can control, as they say. I also got locked in after the Thanksgiving game with a few other reporters, and we tried maybe 12 doors before we finally got outside close to 2 am Still, we could walk to the hotel from there, which was lovely.

Honorable mention: I got to cover the last Rams game in the Coliseum (versus Cardinals at end of 2019 season), and I thought that was just so cool. The history there is remarkable, particularly if you love the Olympics. I covered a few UCLA games there as well, and I have to say that the postgame dash after football games to news conferences is one of the more hectic ones. Still, the overall aura outweighs that.

Jeff Popple asks: With Ketchup Field getting a new name, and Highmark’s deal ending with the current lease, any front-runners for the gap years and the new joint?

Katherine: It’s a boring answer, but if/when the name changes, it’ll mostly be a financial decision, as the Heinz Field change reinforces. On Monday, the Steelers announced a name change from Heinz Field to Acrisure Stadium. The stadium had been called Heinz Field since it opened in 2001, and the company had a prominent presence in the area. That couldn’t overcome a multimillion-dollar decision.

“While we worked diligently with the Steelers for several months around a new naming rights deal, they found a new partner willing to pay significantly more than we could justify,” Kraft Heinz said in a statement, via ESPN’s Brooke Pryor.

I wish more stadiums held on names that meant more to fans, but that’s quite rare.

Ron Raccuia, executive vice president of the Bills and Pegula Sports and Entertainment, was asked about naming rights shortly after the team, state and county reached a deal.

“Highmark is our partner now and Highmark does have right of first refusal on a new stadium, so we hope that Highmark Stadium gets to move across the street with the Bills,” Raccuia said at owners’ meetings in March.

Ed Helinski asks: What, if any, are the Covid rules and protocols for this season? Does the NFL even keep vaccination stats any longer?

Katherine: The NFL and the NFLPA agreed to end their joint Covid protocols in March, just before the combine. So, that means there’s no longer requirements for masks, tracking devices or spacing, among other rules. Players and staff are still to report Covid-19 symptoms to their team, but there’s no longer mandatory testing, regardless of vaccination status.

The memo did make the point that teams still must be “in compliance with state and local law and are free to continue reasonable measures to protect their staff and players.” It further noted that if circumstances change again, the NFL and NFLPA can adjust as they see fit. But for now, all is lifted.

Ed also asks: And what might be your checklist for getting mentally prepared to tackle the garbage plate in Rochester?

Katherine: I am currently grappling with the fact that I am probably not mentally prepared at this moment. Probably drink lots of water? Maybe take a really long walk that day to have a big appetite and listen to some Jock Jams to really get in the zone.

Thanks for your questions these last two weeks. Jay Skurski is back next week as we gear up for training camp.

The Guide Dog Foundation at JFKIAT on Giving Bark Thursday