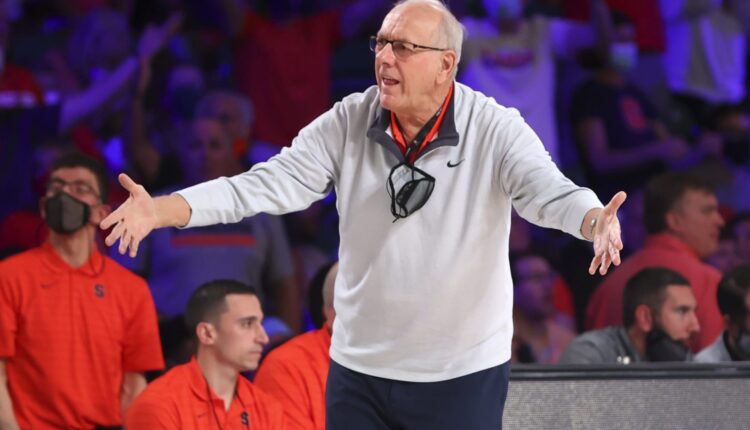 Multiple national analysts and scouts praised Syracuse basketball 2024 five-star target Derik Queen for his performances just a couple of days ago during the latest NCAA live period on the AAU circuit.

The 6-foot-9 power forward from Baltimore, who has taken a bit of a tumble in the national rankings according to several recruiting services, put up some huge numbers when the Under Armor Association league held its most recent round of games in Cartersville, Ga., amid a live period.

Queen suits up for the Baltimore-based Team Thrill in grassroots basketball. He is heading into his junior season at the powerhouse Montverde Academy in Montverde, Fla., which this past spring captured the prestigious 2022 GEICO Nationals.

Offered a scholarship by the Orange coaching staff last October, Queen is poised to have a monster junior term at the Montverde Academy, a squad that is expected to enter the 2022-23 stanza as a pre-season top-five team. And Queen has played at a high level this spring and summer for Team Thrill.

I came across box scores for Team Thrill during the latest stop in Cartersville on the Under Armor Association Web site, and here are statistics for Queen in six AAU battles:

Over those six contests, Queen averaged 18.7 points and 11 boards per encounter. That’s impressive.

In Cartersville, 247Sports director of scouting Adam Finkelstein said that Queen showed “his combination of interior size, touch, and absolutely elite hands to be a constant double-double threat as well as a frontcourt facilitator.”

Travis Branham, a 247Sports national analyst, says that Queen is a “highly skilled post player with gifted hands and touch both around the rim and on his jumper.” The analyst added, “Queen has improved his body and his mobility on the defensive end is reaping the benefits.”

ESPN’s national recruiting director, Paul Biancardi, wrote in a recent tweet that “Derik Queen has all the tools. The physical measurables, scoring touch & footwork are evident. Outstanding hands to catch, finish & rebound. His conditioning level has improved-when it takes the next step his defense will change.”

Now that college coaches are able to make direct contact with 2024 players, I imagine that Queen will see his offer sheet grow significantly. I hope that Syracuse basketball can emerge as a serious contender in his recruitment.