Storms to rumble across eastern parts of nation on Thursday 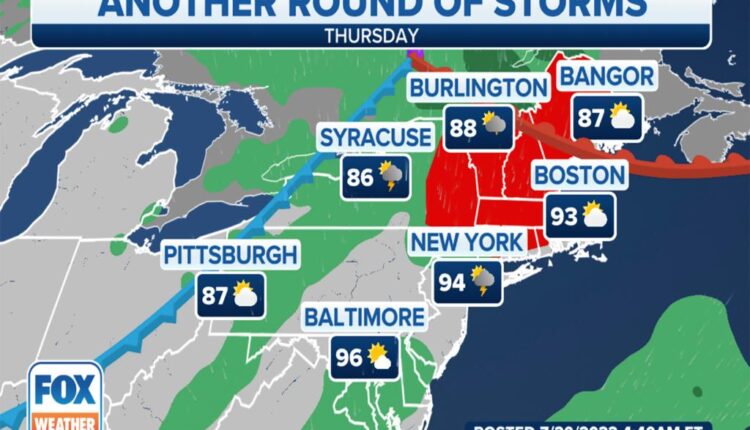 A front moving through the eastern third of the nation will be the focal point for showers and thunderstorms on Thursday from New England to the Gulf Coast.

Meteorologists will be watching for the threat of damaging winds, heavy rainfall and lightning from the storms.

In addition to the severe storm watch, the heat wave will continue to impact major cities in the northeast. On Thursday, New York City will reach 93 degrees in New York City, Washington DC, and Boston, according to FOX Forecast Center.

Weekend temps will be even hotter and could rise to above 95 degrees.

Afternoon storms turned deadly in Georgia on Wednesday when lightning struck a US Army Base. At least one soldier was killed, and nine others were injured when a line of showers and thunderstorms traveled through the Peach State.

The Storm Prediction Center says it expects damaging wind gusts to be the main threat on Thursday but cannot entirely rule out hail or an isolated tornado.

The combination of the storm system and plenty of warm, moist air could help initiate showers and thunderstorms as early as late morning.

Cities under the most significant threat of storms include: Albany, New York; Burlington, Vermont; and Boston.

Forecast models show the rain could be heaviest in interior New England, where a quick inch or two could fall in the heavier storms.

Meteorologists say once the front pushes offshore, it should end the chance of rain.

Widespread thunderstorms are expected to develop by late afternoon and last into the evening.

Any thunderstorm during the summer has the chance of turning severe, but the best chance of finding a strong storm will be south of Interstate 40. 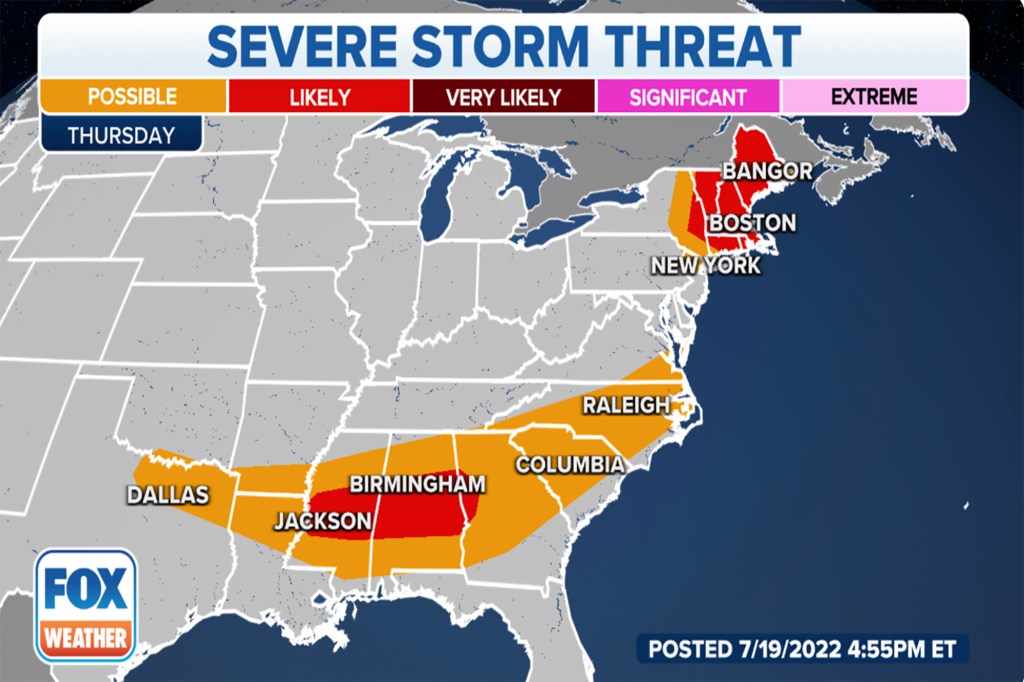 Jackson, Mississippi; Birmingham, Alabama; Atlanta; Charlotte; and Raleigh are among the many cities in the south under severe storm watch.Fox Weather

Cities under the most significant threat of storms include: Jackson, Mississippi; Birmingham, Alabama; Atlanta; Charlotte; and Raleigh.

Similar to the Northeast, damaging wind gusts will be the main threat.

Forecast models show the front will stall over the region, which means there will likely be several days of wet weather.