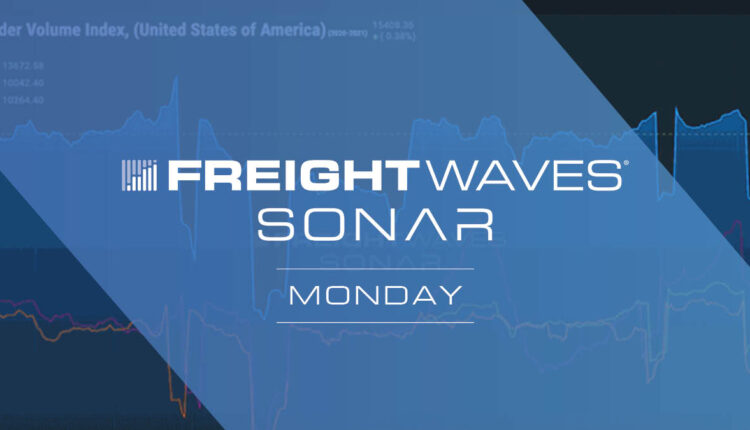 The highlights from Monday’s SONAR reports are below. For more information on SONAR — the fastest freight-forecasting platform in the industry — or to request a demo, click here. Also, be sure to check out the latest SONAR update, TRAC — the freshest spot rate data in the industry.

Milwaukee didn’t get the nickname “Brew City” for no reason. Wisconsin is also the dairy capital of the country — and we all likely know at least one “cheesehead.”

But when it comes to the outbound reefer market, the beer mecca of the United States is one of the hotter places to be during the summer time.

Reefer volumes out of Milwaukee tend to rise the highest during the months of March and April in preparation for summer, but they have also proven to be volatile in the months of May through July within the last three years.

Using the same two-week basis as this year, outbound reefer volumes in the Milwaukee market were only up 4.9% in 2021 compared to 23.8% in 2020 and 21.3% in 2019. After a dramatic increase following the most recent Fourth of July holiday, outbound reefer volumes in Milwaukee saw a 125% increase on a two-week basis on July 12. Those numbers have since dropped and begun to plateau at a 47% increase in the same two-week time frame — double the percentage change from 2020 and 2019 combined.

However, reefer tender rejections out of Milwaukee have begun to trend downward following the drop in volume after the holiday. Outbound reefer rejection sit at 22.3% currently — still higher than the rejection rate at this time in 2019 and 2020.

As the end of summer draws near, we can expect to see this downward trend continue for volumes and rejection in the Milwaukee market until the fall when they have historically risen in time for the holidays. So if one thing is to be taken from these seasonal trends, it’s that beer from Milwaukee will remain in consistent demand.

SONAR Ticker: ROTVIF.MKE with ‘Seasonality’ feature on under display

NTI as a point of reference

The National Truckload Index is a daily look at how spot rates in specific lanes hold up in comparison to the national average, giving carriers and brokers an idea of ​​which lanes to gravitate toward or avoid.

Though Wisconsin is known as the dairy capital, upstate New York is also a heavy producer of dairy. Most notably, food and beverage company Chobani is headquartered in New Berlin, New York, just about two hours away from Albany, presenting an ample opportunity for reefer carriers to book a load once the current job is done.

Albany’s Reefer Outbound Tender Volume Index is experiencing a 2.1% increase on a two-week basis and currently is seeing an upward trajectory. Along with this rise in volume, a rise in rejection follows. Reefer outbound tender rejection for Albany have increased in recent days to 1.5%. Yes, that’s low in relation to other larger markets.

This uptick in volume and rejection has placed pricing power in favor of the carriers, which is evident by spot market rates rising seven cents in the last week alone.