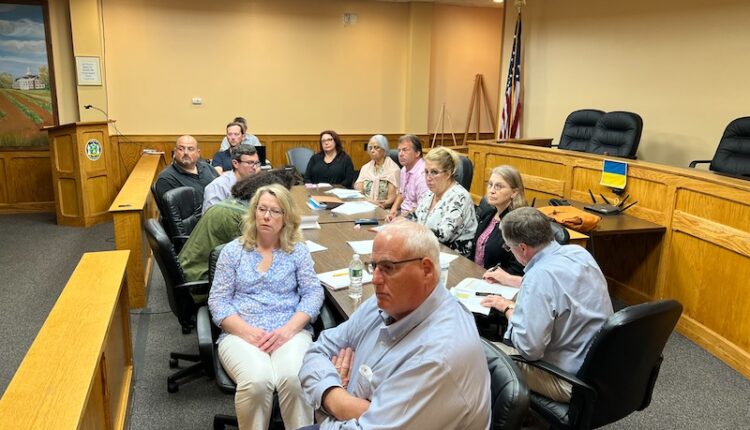 The bulk of the funding recommended by the committee would go to projects at and around the town’s two major downtown revitalization projects: the new town square on East Main Street and a transit-oriented development project near the railroad station.

The committee’s recommendations total just over $13.4 million. Of that amount, almost $7.2 million would be granted to town-sponsored proposals and $2.75 million would go to the town’s designated master developer for the transit-oriented development area.

The projects recommended by the committee are:

Four projects that applied for grant consideration and were not recommended by the committee. The committee determined the projects would not receive the committee’s funding during a work session last month, a decision the committee stuck with when voting on its final recommendations today. The projects are:

The committee was tasked with developing a list of $12 million to $15 million in funding recommendations, though the state will only award $9.7 million in grant funds, with the remaining $300,000 of the $10 million grant covering planning expenses.

The state’s DRI consultants, Perkins Eastman, will prepare Riverhead’s strategic investment plan. The plan will be presented to the State Department of State, the agency that administers the DRI program, for “review and due diligence,” according to Jeannette Rausch, the Department of State revitalization specialist for New York City and Long Island.

The final strategic investment plan will then be sent to the final decision maker, most likely the governor, to decide which projects will be funded, Rausch said.

The state will enter into contracts with project sponsors to receive the funding after the final decision is made.

During today’s meeting, committee members did a final review of project proposals before their vote. A few funding requests had changed since the committee’s work session last week, and the committee had gathered more community input during a public outreach meeting at the Long Island Aquarium the week before, on July 11.

Perkins Eastman associate Will Quattlebaum noted during the review that community members were supportive of two projects in particular: the Suffolk Theater and the rowing facility on the Peconic River.

Residents during that meeting said the Suffolk Theater is an economic driver for the town and encouraged support for its expansion, which would include enlarging its stage creating a backstage area, dressing rooms and other amenities the Suffolk, a converted movie theater, lacks. The theater’s expansion plans also include a five-story addition on the back of the existing building, with 28 residential apartments, including three workforce units, and ground-floor retail.

The town-sponsored rowing facility project also received support during the public outreach meeting and the public comment portion of the LPC’s work session. Garret Moore, a member of East End Rowing Institute, the organization which originally submitted the project, said a facility on the river will benefit the town recreation department’s rowing program.

“The proposed facility for the storage of boats, usage of boats, is really going to be an opportunity to promote regattas to this area and really make the river more utilized through spring through November,” Moore said during today’s meeting.

“It would really be a facility that could really help to make Riverhead a destination for rowers,” said Moore, a high school teacher. “And also…maybe even get Riverhead High School back to having a rowing competition, which we have had several students over the past years have scholarships to go on to college. So we’re looking to bring back the new generation and try to make that happen for the future.”

One funding request that changed since the last work session was RXR/Georgica Green Ventures’ request to fund a part of the developer’s transit-oriented development proposal. The TOD funding request was initially to support a mixed use building slated for the municipal parking lot opposite the train station, which is proposed to have 243 rental apartments. The committee ended up recommending that $2.75 million in funding go towards a mixed-use building and parking garage proposed for Griffing Avenue. The building would include 30 workforce apartments, 333 public parking spaces, and retail space on a Suffolk County-owned New York State Supreme Court parking lot. The town has a letter of intent for the county to transfer the property to the town for the development, Community Development Director Dawn Thomas said during the meeting.

During today’s meeting, Supervisor Yvette Aguiar remained critical of the Long Island Science Center’s request for funding, accusing the museum of not communicating with the town on its project to restore a building adjacent to the square.

The $1 million the committee recommended for the science center would go towards improving the facade of the building facing the square. The proposal shown during the meeting includes space for a gift shop, makerspaces, exhibits, a planetarium and the relocation of the East Main Street bar Craft’d, which would be displaced when the building currently on the east side of the town square site is demolished to make way for a boutique hotel planned for the site by town square master developer J. Petrocelli Associates.

“They’ve sent us a very comprehensive business plan and more information on the source of their sponsor contribution,” Quattlebaum said at the start of the meeting. “Their attorney sent us a memo stating that they are going to be receiving credit they’ve applied for and they’re projected to receive $12 million in…federally backed loans for the project.”

“Of course, we have an attorney. Okay, she’s fully aware of confidentiality concerns, she is the Community Development Director, she’s in charge of this project,” Aguiar replied. “We’re not going to post it on Google. They can trust us on that. And we’ve been trying to get some semblance of what they’re doing. And this is the first time they are producing something. All he has to do is put confidential on it and we know, as legislators, as elected officials, that we’re not going to put it on eBay for somebody to buy it.”

When committee member Andrew Mitchell asked whether the LISC had offered a timetable for the project, Aguiar responded: “Not at all.”

“It is in the business plan,” Quattlebaum interrupted.

Aguiar said that although the science center project is critical to the square, it needs to move along and that she is “very concerned” about the project.

“I think that there is a sense of this committee, that the Long Island Science Center project and the upper town square project are very much, if you will, one major piece — together — of this initiative,” Mitchell said. “And perhaps it would be helpful to convey to the science center that there is a strong desire from the committee — if others feel the same way, if the committee feels the same way — that the two projects should be coordinated. And that they should commence very quickly in a coordinated manner.”

“Doing one and then leaving the other for the future. It’s going to be cumbersome, and probably very costly and disruptive,” he added.

Some committee members maintained that the science center was important to the activation of the town square.

“If this million dollars is going to help with the facade, and then complement that side of the town square, then, you know, I think that yes, the project should be done simultaneously. And, of course, that makes it more efficient. But I think it’s an important piece of the activation in the town square,” Long Island Aquarium manager Bryan DeLuca said.

Others doubted how much of an impact the science center’s facade could have on the activation of the square.

“You have a lobby, a gift shop, a makerspace gallery, and then of course, the restaurant. I mean personally speaking I don’t see that as activated in the town square,” said Steve Shauger, president of the Business Improvement District Management Association. “Think about what’s proposed on the other side where you have multiple retails that are going to go in there: museum, food and beverage. I still personally have concerns that I don’t think this is activating this side. I feel like even having small retail and things that will complement the town square would benefit and these other things that they have proposed can also be worked in there without taking up the size of the space that they’re looking to do.”

The committee also discussed renderings and plans that were submitted by the science center during the meeting that showed the center’s planetarium on property owned by the town, where the park and playground project was proposed.

“That property belongs to the people of this town and we can’t just give away property and either there’s a purchase costs for it, or if anything they sell the museum, which people have done, right?” Aguiar said. “They buy in the middle of the town square that’s developing, and they take their time and they sell it and they get record prices, that property has to be brought back to the people, the residents of the Town of Riverhead,” she said.

“I have to support the supervisor objecting to the fact that they’re proposing a project that encroaches on town property,” said Dave Kapell, who co-chairs the committee with Aguiar. “Their project should be limited to what they control,” he said. “In the future if there’s another agreement, that’s a different story. But in terms of what we’re gonna act on today,” he said.

“Yeah, how do you act on it?” Aguiar replied. “And you don’t know that they’re using — they want to take our residents’ property. This is — I’m a real estate agent. You don’t make a deal like this. I’d be sued. They should be sued,” Aguiar said.

Rausch said a project requesting funding to make improvements on a site that it doesn’t control is unfavorable to the state. “If this is an issue that has just come up more recently, from their last plan, if the LPC wants to approve the project on the overall list, there’s still time for the town and the science center to have discussion.”

“If it is encroaching on town property, one would assume that they could adjust it so that it doesn’t encroach,” Mitchell said.

“I think the fundamental question continues to be, it seems to me that the science center is so integral to what we’re trying to accomplish in the downtown project, and specifically the town square project,” Mitchell said. “That if there’s anything we can do, including giving them a million dollars, to expedite the implementation or execution of the plan, and hopefully coordinate it with the other side of the street, that would be, I think, what we’re all looking to achieve here.”

Towards the end of the meeting, Cailin Kaller, executive director of the science center, addressed some of the committee’s concerns. She said the image showing the planetarium on town property was made as a request during a DRI stakeholder meeting, and the project “is in no way contingent upon us receiving free land from the town.”

“This is one of the proposed things that we’ve discussed with the CDA department as well as the DRI committee as a potential way to mitigate flooding and have an iconic beautiful planetarium on the riverfront,” Kaller said. “It is one of the spaces where the planetarium can go. There are two other spaces that are completely on our property and we are in discussions actively with the town about those right now.”

Kaller said that she is “100% in agreement” that the science center needs to be coordinated with the town square projects.