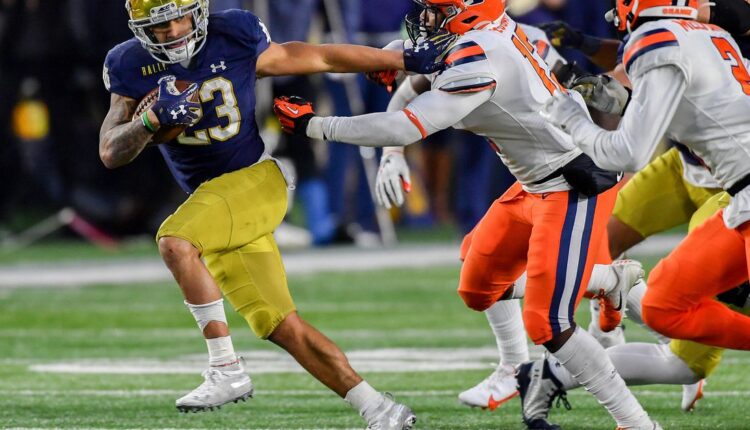 The Notre Dame Fighting Irish have a solid mix of some classic rivals, some first-time matchups, and some once-in-a-blue-moon games on the schedule this season. The price of fuel keeps going down, so I took the way back machine to the gas station and filled up. This time, we’re looking back at some of the history between the Irish and the Syracuse Orange. The two teams have faced off ten times in total; the Irish have the lead in the series, 7-3.

What’s the back story?

The Irish and Orange faced off for the first time in 1914 with Jesse Harper at the head coach position and Knute Rockne as assistant, and Notre Dame set the tone with a 20-0 win.

The series didn’t move forward until a controversial 1961 matchup in South Bend. At the time, the procedures concerning defensive penalties once time had expired were up in the air. With the Orange ahead 15-14, Irish kicker Joe Perkowski missed a 56-yard field goal as time ran out. A call on Syracuse’s Walt Sweeney for roughing the kicker followed, which granted Perkowski 15 yards. He notched a winning field goal on a second attempt to lock in the win for the Irish, which caused a stir as it was unclear if the second kick would be warranted as time ran out. Following a few months of back and forth, a 17-15 Irish victory stood, but rules changed in 1962 to prevent similar confusion. In 1963, however, the Orange notched their first win of the series in New York City and beat the Irish 14-7.

2003 brought the next chapter of the series and ended 38-12 in the Orange’s favor and snapped a three-game winning streak for the Irish. In 2005, however, two touchdown passes from Brady Quinn and a solid performance from Notre Dame walk-ons earned a 34-10 Irish victory.

A last-minute touchdown pass from the Orange’s Cameron Dantley to Donte Davis ended the 2008 game for a 24-23 upset of the Irish. In 2014, 25 complete passes from Irish quarterback Everett Golson helped to chalk up the first Irish win of the series under Brian Kelly’s leadership. A 79-yard touchdown pass from DeShone Kizer to Equanimeous St. Brown set the tone in the first quarter for a 50-33 Irish win in the 2016 game.

A two-score showing from Notre Dame quarterback Ian Book along with those disgraceful Yankee pinstripe alternates marked the 2018 Shamrock Series meeting between the Irish and the Orange, a 36-3 win for Notre Dame.

The two squads left off in 2020, when the Irish overpowered the Orange on Senior Day 45-21. This game locked in a third undefeated regular season under Brian Kelly’s leadership.

A SEVERE THUNDERSTORM WATCH HAS BEEN ISSUED FOR CONNECTICUT AND MOST OF NEW ENGLAND UNTIL 8:00 PM…