Skyrocketing four-star wing is now down to 10 suitors 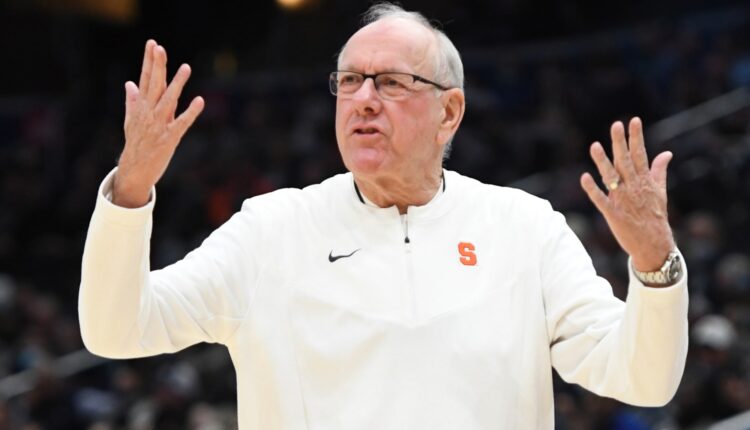 Kaden Cooper, a fast-rising wing in the 2023 class who landed a Syracuse basketball scholarship offer this spring, has trimmed his list of contenders still in the running to 10 teams.

Unfortunately, the Orange didn’t make the cut for the 6-foot-6 guard/small forward, who has proven one of the best all-around performers in grassroots basketball over the past several months.

Per media reports, including one from On3 national analyst Joe Tipton, the top 10 for Cooper are Gonzaga, Oklahoma, Oklahoma State, LSU, Kansas State, Kansas, Texas, Alabama, Memphis and Georgia Tech.

Throughout his recruiting process, the four-star Cooper has landed more than 30 offers. ‘Cuse coaches offered a scholarship to him at the end of April.

Syracuse basketball is out of the running for four-star wing Kaden Cooper.

Cooper, who hails from Oklahoma, goes to the Skill Factory in Atlanta. On the AAU circuit, he runs with the Oklahoma-based Team Trae Young in the Adidas league.

In grassroots basketball this spring and summer, including during NCAA live periods when college coaches could watch him in person, Cooper has performed quite well, displaying his immense athleticism, defensive prowess and expanding offensive skill-set.

Besides at AAU competitions, Cooper was lauded by national analysts and scouts for his play at the prestigious Pangos All-American Camp, which was held not too long ago out in Las Vegas.

When several of the primary recruiting services refreshed their national rankings for the rising senior class a few months back, Cooper was a huge stock riser, vaulting into the top 50 across the country in the 2023 cycle.

Several recruiting web sites also situated him within the top-10 to top-15 overall at the small-forward position in 2023.

Candidly, I’m really high on Cooper. I’ve read a bunch of interviews with him in recent months, and he appears to be a hard-working, confident yet humble, spirited young man.

He’s got a lot of impressive contenders still in the mix, and I’m wishing Kaden Cooper all the best at the collegiate level and beyond.