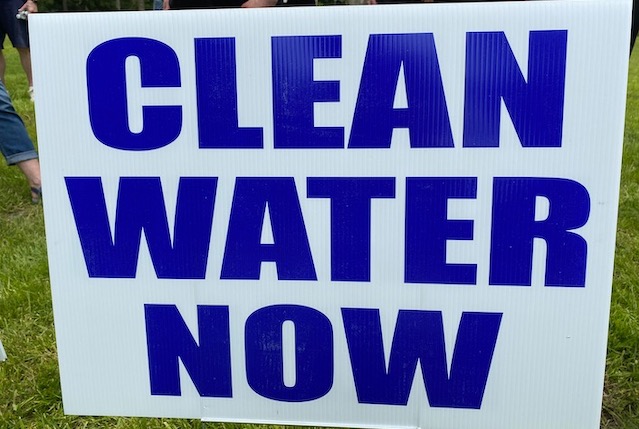 Riverhead officials met with representatives of the Navy earlier this month to ask for “swift action” to provide public water to residents near the former Naval manufacturing plant whose private drinking water wells are contaminated with per- and polyfluoroalkyl substances, known as PFAS.

Supervisor Yvette Aguiar, who in the past has called on the Navy to take responsibility for groundwater contamination and pay the cost of public water extensions to serve the affected homes, said the town demanded the July 8 meeting to bring the matter to conclusion.

“We presented an exceptional, strong case to them,” Aguiar said. “We talked about water flow and PFAS. And they initially denied that they were culpable in any way,” she said.

By the end of the meeting, Navy representatives Melvin Acree, Naval Facilities Engineering Command for the Mid-Atlantic and Michael Maule, Esq. an attorney for the Navy, agreed to bring the town’s request for funding “to their higher-ups,” Aguiar said.

“And they claim that could potentially lead to some funding,” she said.

Mancini said he and Carey made a strong case during the meeting for the Navy to bear the cost of extensions in the River Road area, located east of the EPCAL property, where 23 residential properties are affected or at risk of contamination.

The Navy has tested private wells in the area, and residents shared test results with Mancini, he said. They showed levels of PFAS and 1.4 Dioxanes above the action level and EPA health advisories, Mancini said.

Mancini, a hydrologist, said he also presented the Navy with evidence that the groundwater flows from the former Grumman site in the direction of the private wells in the River Road area.

“I think the meeting went as well as possible,” Mancini said. “We’re hoping for the best.”

A February 2021 estimate of the cost to extend public water mains to the River Road area, prepared by Riverhead Water District consulting engineers H2M, predicted a price tag of just under $3.2 million. Costs have soared since the estimate was prepared, due to both supply chain disruptions and inflation and the final cost of the extension is expected to be much higher.

A Navy spokesperson was noncommittal about possible funding when reached for comment last week, but said the Navy has tested wells to the east of the facility that are “downgradient from known or suspected” Navy PFAS releases and “will continue to evaluate these areas to determine if further action is necessary.”

But the spokesperson also reiterated the Navy’s position denying responsibility for contamination of private wells directly south of the former manufacturing plant, which was owned by the Navy for decades and leased to Northrop Grumman until 1996. Sixty-four homes in that area have no access to public water. The cost of a water district extension, long sought by residents in that area, was estimated to be nearly $5.9 million in February 2021. Since then, according to the water district superintendent, the estimate has increased to about $9.5 million.

The area south of the former Navy facility are “not downgradient… from known or suspected releases of PFAS” at the Calverton facility, the spokesperson said in an email, “and therefore, the Navy cannot be the source of PFAS chemicals in these private drinking water wells. The Navy is not authorized to take action to address PFAS from non-Navy sources,” he wrote.

An adjacent area in the Town of Brookhaven, where PFAS contamination is affecting drinking water wells, is targeted for an extension of public water to an additional 64 homes by the Suffolk County Water Authority.

Riverhead Town and the Suffolk County Water Authority each landed a $3.5 million federal grant to help fund public water extensions to the area. The water authority also got a $2.7 million state grant for its Manorville extension, but the town’s state grant application was not funded. The town has an opportunity to apply again for the state water infrastructure grant next month.

The water authority, meanwhile, has offered to work with the Riverhead Water District to devise a cost-effective plan to provide water to the affected homes in the Riverhead Town portion of Manorville. The town and the water authority are negotiating an agreement for that purpose. A Suffolk County Water Authority spokesperson said today the parties have not reached a final agreement yet. Kelly McClinchy and her neighbor Ron Martz, in February 2020, look at a map showing homes that have been tested for contaminated water, as Martz points out homes where he says people have been sickened with cancer. File photo: Denise Civiletti

Manorville residents in Riverhead Town, led by resident Kelly McClinchy, have been vocal advocates for public water, yet still find themselves uncertain about whether water mains in their neighborhood will ever become a reality — even as homes in nearby neighborhoods inch toward the goal.

But McClinchy, who became a community activist in the fight for public water and was later named to the Calverton Restoration Advisory Board — a committee that advises the Navy on the clean-up and restoration of the Calverton site — said today she was glad to the Navy may be acknowledging responsibility for contamination in the River Road area of ​​Calverton.

“The Navy has known for years those homes are downgradient of the former Grumman/Navy facility,” McClinchy said.

“For years, community and RAB members have encouraged the Navy to examine this area again in light of the discharged water and the lowered NYS standards for contamination,” McClinchy said. “The community supports the town’s efforts in pushing forward and holding the Navy responsible for contamination to these homes,” she said.

“It is high time the Navy not only begins to adhere to appropriate” drinking water standards for PFAS and other “emerging” contaminants, McClinchy said, “but also begins to right the wrongs they have placed upon the residents within the community by providing funding to ensure that each person has safe drinking water.”