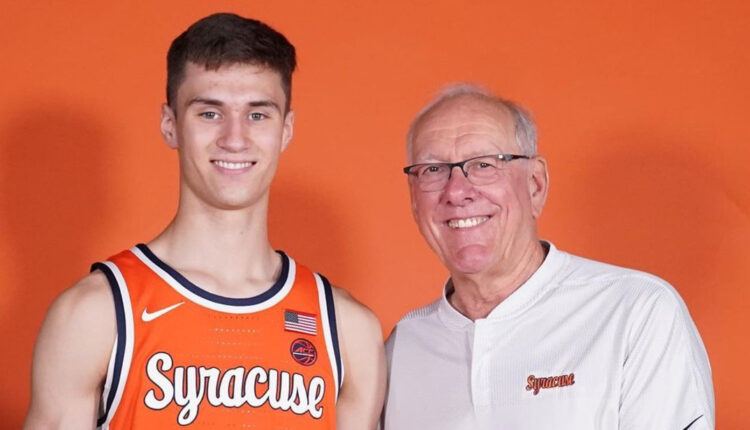 Syracuse basketball recruiting target Reid Ducharme, a talented 6-6 shooting guard in the 2023 class, scored 42 points on 15-25 shooting including 6-11 from three point range and 6-7 from the free throw line in 32 minutes of BABC’s 88 -60 win over Vegas Elite at Peach Jam on Monday. Ducharme also added three rebounds, one assist and two steals.

The 42 points also included two buzzer beating threes at the ends of the first and third quarters, according to reports, and represents the most points scored in an EYBL game this AAU season. You can watch some clips of the outing below.

The performance comes one day after going 0-9 from the floor including 0-4 from beyond the arc in BABC’s loss to Team Herro. It was quite the bounce back on Monday for the sharp shooting guard.

Ducharme took official visits to Penn State, Syracuse and Xavier in June. He is looking to make a final decision prior to the start of his senior season at Brewster Academy.

“I was able to workout with the players,” Ducharme said after his Syracuse visit. “I did that both days. I had meetings with academic advisors. I looked at the Faulk school, that was pretty interesting. They have an NIL class that they just started, so I like that. Had meetings with coach. We went to coach Boeheim’s house for a barbecue with the pool and lawn games and the players. That was fun.”