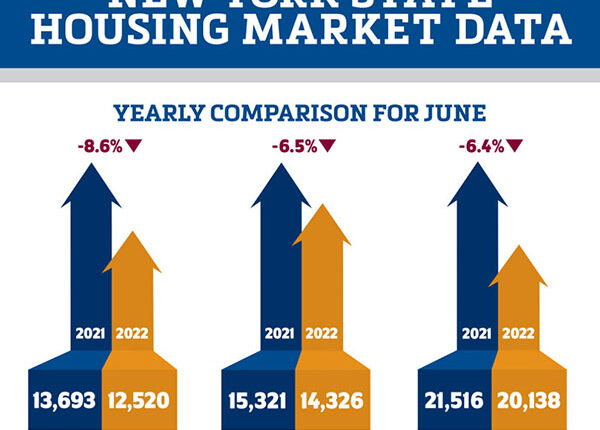 ALBANY — New York realtors sold 12,520 previously owned homes in June, down 8.6 percent from the 13,693 homes they sold in the year-ago month, as tight inventory and rising prices and mortgage rates took a toll.

“A prolonged lack of homes on the market across the Empire State, combined with high prices and escalating mortgage rates continue to slow the New York housing market,” NYSAR said to open its report.

The association cited data from Freddie Mac indicating that the monthly average on a 30-year fixed-rate mortgage rose from 5.23 percent in May to 5.52 percent in June. This is the highest the monthly average commitment rate has been since November 2008, when it stood at 6.09 percent. Freddie Mac is the more common way of referring to the Virginia–based Federal Home Loan Mortgage Corporation.

Pending home sales (houses under contract) in New York totaled 14,326 in June, a decrease of 6.5 percent from the 15,321 pending sales in the same month in 2021, according to the NYSAR data. These points to probable further declines in closed home sales in the next couple of months.

The months’ supply of homes for sale at the end of June stood at 3.1 months, down more than 6 percent from 3.3 months in June 2021, per NYSAR’s report. A 6 month to 6.5 month supply is considered to be a balanced market, the association noted.

The number of homes for sale in New York state totaled 38,965 in June, a decline of more than 14 percent from the year-prior period.

All home-sales data is compiled from multiple-listing services in New York state, and it includes townhomes and condominiums in addition to existing single-family homes, according to NYSAR.

Buffalo Sabers, fans should cringe if the NHL signs with Nike

Lynx Captured After Being On Loose In Suffolk County