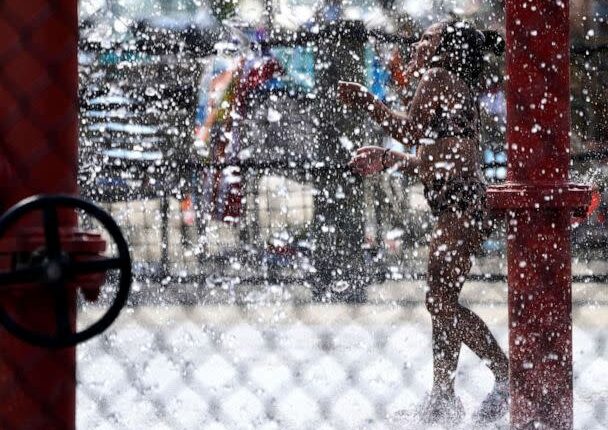 More heat is on the way for the US this weekend with more than 85 million Americans now under heat alerts, amid an ongoing heat wave. Temperatures and heat indices are expected to surge into the 100s from coast-to-coast.

Heat index values ​​Saturday afternoon are in the triple digits across much of the Midwest into the South with temperatures feeling like the upper 90s to near 100 degrees along parts of the East Coast. In parts of the West, a third heat, with hot, but close to seasonal temperatures, from the desert in the Southwest into California’s Central Valley.

In the West, temperatures are expected to soar up to 115 degrees.

PHOTO: A mother cools her son with a portable fan while waiting for the bus during a heatwave in Houston, July 21, 2022. (Brandon Bell/Getty Images) 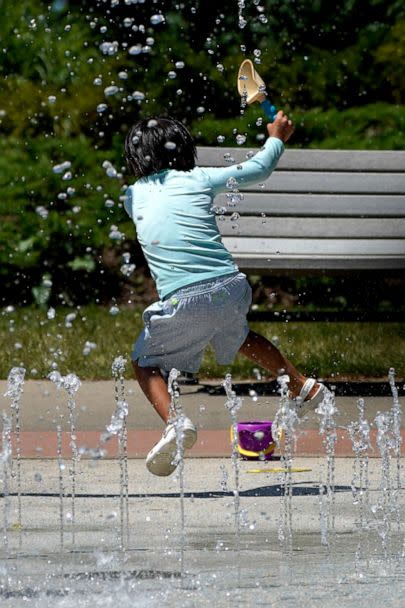 PHOTO: A child cools off during hot weather as he plays with the water fountains at Little Bear Park in Glenview, Ill., July 20, 2022. (Nam Y. Huh/AP)

The fires in Mariposa County, California, jettisoned overnight and burned more than 5,000 acres in roughly 12 hours. Dry conditions and breezy winds will continue to add fuel to the wildfires, helping them grow, officials say.

Exceptional Drought conditions are in place across more than 90% of Mariposa County, including where the Oak Fire is burning. The relentless drought conditions are a major factor with this fire, providing ample dry fuel and brush in the region. This is the third wildfire to burn in the county over the past two weeks.

In the central US, temperatures will feel like they’re up to 110 degrees in some areas. This comes after more than a week of temperatures close to the 100s, for some. Meanwhile, drought conditions continue to increase throughout the Heartland. 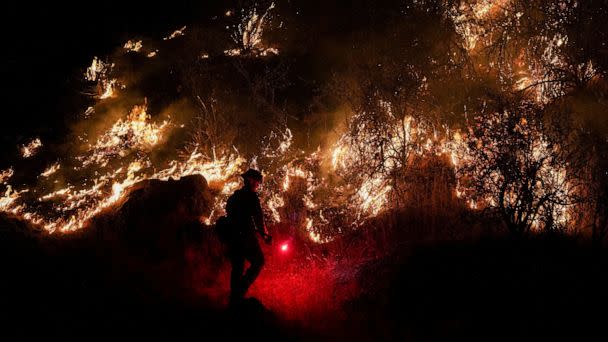 PHOTO: A firefighter works to mitigate the flames as the Oak Fire burns near Mariposa, Calif., July 22, 2022. (Tracy Barbutes/Reuters)

The worst of this heat wave for much of the Northeast, including the I-95 corridor, will be on Sunday when the humid conditions return on top of the very hot temperatures. Afternoon temperatures will be soaring well into the 90s in many cities, some locations nearing 100 degrees for the actual air temperature. This is the hottest weekend of the year so far for Philadelphia, New York City and Boston.

Heat index values ​​will top 100 degrees Sunday afternoon in some locations as the humid conditions make it feel even hotter for those outside. Some daily record highs will be challenged on Sunday in the Northeast.

Temperatures are expected to remain in the 90s for much of the Northeast through Monday, with temperatures in the 80s returning on Tuesday along with chances for storms.

There is also an enhanced risk for severe weather in the Great Lakes region. More than 20 million Americans live in areas with tornadic potential today. Damaging winds will be the primary threat, with large hail also possible. 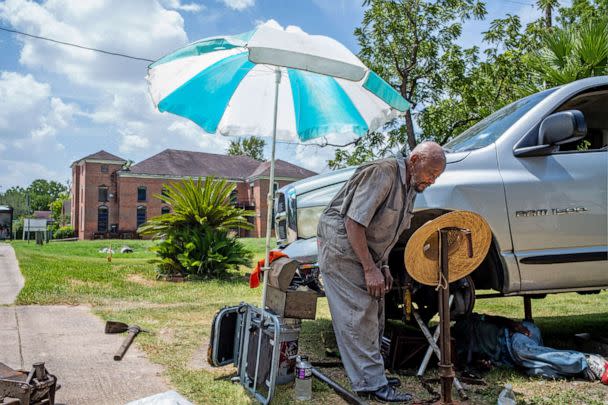 PHOTO: A mechanic works on a neighbors vehicle during a heatwave on July 21, 2022 in Houston. (Brandon Bell/Getty Images)

The widespread, relentless drought continues to impact much of the West into Texas. The latest US Drought Monitor released on Thursday shows slight improvements in parts of the West, with worsening drought conditions reported in Texas and Oklahoma over the past week.

While there is currently no widespread or organized fire danger area with overall light winds in place in many locations, the persistent dry conditions and rounds of hot temperatures are providing ample dry fuel and brush for fires to burn in the Texas and Oklahoma region.

Man arrested for threat against Black shoppers in Buffalo