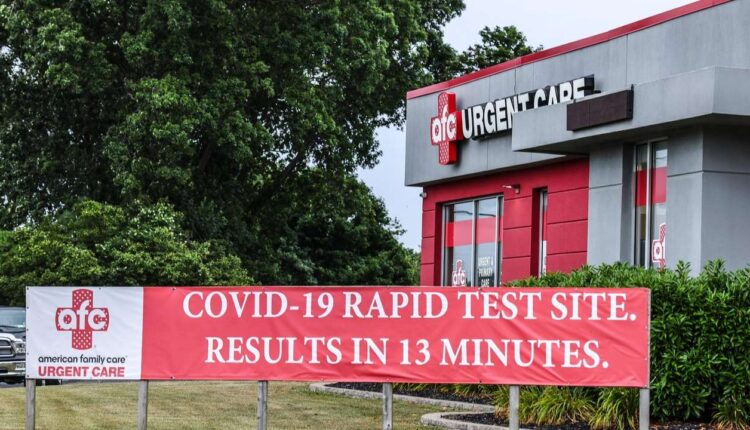 Infectious disease specialists said the real number of new cases is far higher than that, because many people are home testing and not reporting the results to the state.

The BA.5 omicron subvariant is fueling what some experts called a new wave of infections. They expect numbers to keep rising, but can’t predict how high.

In response, New York City last week urged people to wear masks in all indoor locations as well as in crowded outdoor settings.

Experts said that while case numbers are increasing, hospitalizations and deaths have not jumped because BA.5, while highly transmissible, does not cause as severe illness as last summer’s delta variant, for example.

At this point, said Dr. Jean Marie Osborne, associate professor of Health Policy at Molloy University, it is politically impossible to mandate masks. But, Osborne said, people should do so voluntarily on Long Island to help tamp down the latest surge.

“It is alarming that this is happening during the summer and I think we need to really be concerned about what the fall and the winter is going to bring,” she said.

“Personally, I still do it and still would do it in a crowded space, however you might define that, where you’re going to have closer contact with more people,” he said.

Wearing masks is especially important since BA.5 is better able to evade the protection of vaccines — even as vaccines remain highly effective against severe illness or death, Bulbin said.

“It’s not going to necessarily protect you from getting sick,” he said, “so you do have to create more protection, and the easiest way is to keep your mask on.”

“I consult on a weekly basis with our health commissioner and infectious disease specialists who consistently report to me that while there is a rise in COVID, it is a much milder form and there is no public health crisis,” Blakeman said.

“Every step we take to protect the public also has to be measured with the economic consequences and psychological damage that drastic measures exacerbate.”

In pushing for a return to normal, Blakeman announced a free “Nassau is Back” concert on July 30 featuring Joan Jett.

“After years of COVID restrictions, I am excited to welcome Long Island’s own Joan Jett back to the Lakeside Theater at Eisenhower Park to celebrate our county’s resiliency and show the rest of the state and country that Nassau is back and open for business,” Blakeman said.

Suffolk officials did not comment directly on whether they are recommending masks.

“What we have learned is that COVID-19 will be with us for the foreseeable future, but luckily, hospitalizations and patients in the ICU continue to remain low,” Suffolk Health Commissioner Dr. Gregson Pigott said. “We encourage all residents to take the necessary precautions to keep themselves safe.”

Hirschwerk and other experts said it is not time to panic, and that doctors have many tools to control the pandemic — chief among them, vaccines and boosters.

“I think currently it is manageable because the majority of people are not becoming severely ill,” Hirschwerk said.

From Saturday through Monday, eight people in Nassau and two in Suffolk died of causes linked to the virus, according to state data. The statewide death toll was 39.

gov. Kathy Hochul said Monday that while “COVID continues to be ever-present,” hospitalizations — 2,384 on Monday statewide — have not gone up much.

“We’re not doing poorly on that front,” she said, “and thankfully the deaths remain very low.”

Bart Jones has covered religion, immigration and major breaking news at Newsday since 2000. A former foreign correspondent for The Associated Press in Venezuela, he is the author of “HUGO! The Hugo Chavez Story from Mud Hut to Perpetual Revolution.”

Which Buffalo Bills players are poised to breakout in 2022?