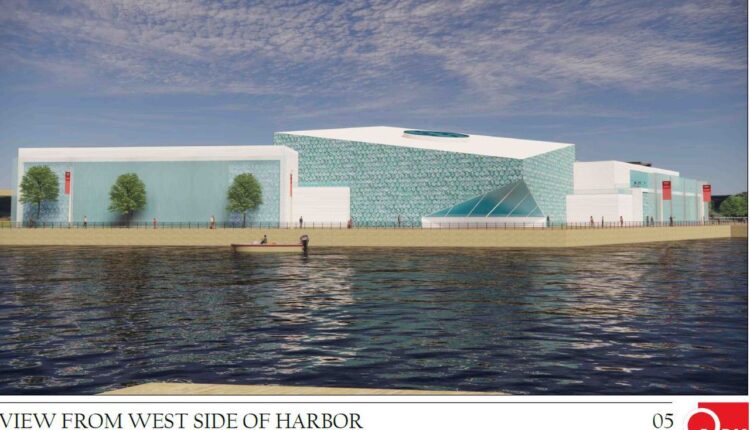 Syracuse, NY – Democrats on the Onondaga County Legislature today said they have not been persuaded to vote for an $85 million county-owned aquarium. But they expect the project already has enough Republican support to be approved when the GOP-dominated legislature votes on it next Tuesday.

County Executive Ryan McMahon sent a team of representatives to a legislative committee meeting Tuesday to make a final pitch for a 600,000-gallon aquarium at the Syracuse Inner Harbor, a project he first proposed 10 months ago.

Led by zoo director Ted Fox and Mary Beth Primo, deputy county executive for physical services, the county executive’s team addressed several major issues raised by critics. They laid out plans for a capital reserve fund to cover maintenance issues and elaborated on plans to incorporate research and educational programming at the facility.

None of it was enough to win over the six Democratic legislators, most of whom say there are better uses for the money. But Legislator Chris Ryan, the Democratic minority leader, said he believes McMahon has already secured enough Republican votes to approve the aquarium at the legislature’s Aug. 2 meeting.

If that prediction holds, it will still be more than two years before anyone can visit the aquarium. It will take up to 10 months to design the facility and another 18 months to build it, said Archie Wixson, commissioner of facilities management.

Asked where they stood Tuesday, several Republican legislators declined to comment or said they were still undecided. But Democrats said McMahon would not press for a vote unless he felt certain of victory.

Legislator Linda Ervin, D-DeWitt, said she figured McMahon had secured enough GOP votes a week ago, after he and his supporters stopped trying to win her over. Republicans hold 11 of the 17 seats on the legislature.

The Republican McMahon has labored for months to put together a majority, despite GOP dominance on the legislature. Several Republican lawmakers had expressed serious reservations about the financial sustainability of the project.

Legislature Chairman James Rowley, R-Clay, said Tuesday he was “leaning for” the aquarium. Previously, he has said he was neutral.

Legislator Mark Olson, R-Fayetteville, said he was still undecided. He was planning to meet with the county executive after today’s session.

“This is a hard vote,” Olson said. “I still haven’t gotten all my questions answered.”

Olson said his calls from constituents were running about 10-to-one against the aquarium. But other Republican legislators, including Julie Abbott, of Skaneateles, and Deb Cody, of Salina, said they were hearing from plenty of supporters, too.

Abbott and Legislator Tim Burtis, R-Cicero, said the strong possibility that the county will attract a major semiconductor manufacturer to its business park in Clay is an important factor because it could add thousands of families to the county.

In her presentation Tuesday to the Ways and Means Committee, Primo laid out the county’s plan to establish a reserve fund so that taxpayers don’t get stuck with maintenance costs in the future. The fund would draw from ticket revenue, naming rights, sales taxes and some of the revenue the county receives from the Oneida Indian Nation under a gaming rights compact.

Fox assured legislators that the aquarium would seek accreditation from the Association of Zoos and Aquariums. That requires involvement in educational programs and scientific research, he said.

To guide those projects, McMahon recently announced plans for a science advisory committee. The committee’s first meeting will be next week.

Ervin said if McMahon had laid out plans for scientific research and other details when he proposed the aquarium 10 months ago, it might have gained more support. At this point, she said, it seems likely to continue to have loud opposition.

Ryan McMahon fishes for aquarium votes among Democrats; is anyone biting?

Why build an $85 million aquarium in a pandemic? Ryan McMahon makes his case

7 On Your Side: Hamptons headache as summer rental disappears