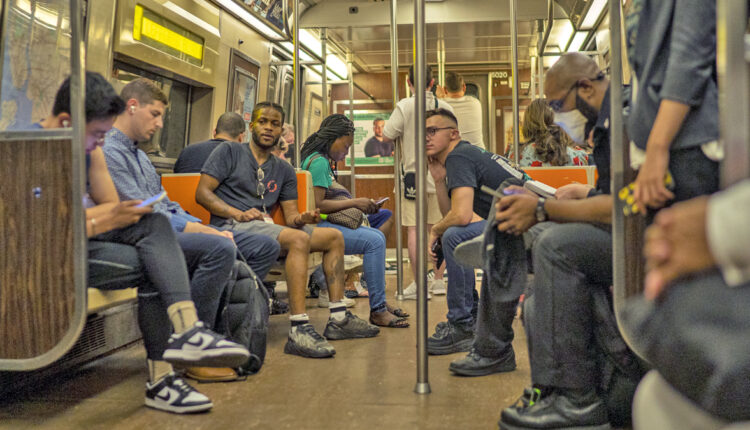 All five boroughs of New York City are back in the CDC’s high-risk category for COVID community spread as of the agency’s Friday update, a reflection of the increasingly infectious national climate as the “worst version” of omicron yet holds its dominance.

Manhattan, Queens, Brooklyn, the Bronx and Staten Island had all been in the CDC high-risk category for the latter half of May and transitioned to medium risk through June as viral rates and hospital admissions associated with that wave ebbed. The relief was short-lived, though, with all five boroughs now in a heightened state of risk.

That means face masks are recommended for everyone indoors and in public settings, regardless of vaccination status — again. It comes as some neighborhoods in Manhattan and Queens are seeing 25% positivity rates (again). City health officials renewed their indoor mask advisory on Friday in light of the updated COVID data.

We’re currently seeing high levels of COVID-19 in NYC. To help slow the spread, all New Yorkers should wear a high-quality mask, such as an N95, KN95 or KF94 in all public indoor settings and around crowds outside: https://t.co/B6U7bSKPVV pic.twitter.com/ Z1Pgt0nAPU

And as in prior waves, the problem is hardly relegated to New York City.

As of Friday, more than a fifth of all US counties — 667, total — are designated high risk for community spread by the CDC, an increase of 70% in just the last two weeks. In New York, Westchester County joined the five boroughs in their return to high-risk, while Suffolk County was downgraded to medium after just a week at elevated risk.

What’s behind the latest wave? It doesn’t appear to be much of a mystery. COVID variant BA.5, an omicron descendant that evidence indicates to be more transmissible than earlier strains, also appears to be at least four times more vaccine-resistant, according to a new Columbia University study published this week.

BA.5, which accounted for more than 40% of all New York state positive COVID samples sequenced for variants in the latest two-week data set (and 45% of all NYC samples tested, according to that health department), and BA. 4, were at least 4.2 times more vaccine-evasive than their predecessor, Columbia University research says.

It notes that subvariant BA.2.12.1, which fueled the May case and hospitalization surge that sent 87% of all New York state counties into the CDC’s COVID high-risk territory, was found to be only 1.8 times more resistant. And just one therapeutic antibody authorized for clinical use retained full potency against those strains, the study says.

An update to the COVID vaccines is needed to fight Omicron BA.4 and BA.5 subvariants that are increasing case counts now, says Dr. Uché Blackstock, an MSNBC medical contributor and head of Advancing Health Equity.

Reinfection rates across the Empire State have supported the research findings as of late. Overall, that risk is up across the board in New York state, with Long Island reporting the highest reinfection rate (7.3 per 100K) over the last week, followed by New York City (6.9 per 100,000), according to the latest state data.

The two regions represent the most virulent ones in the state right now, although New York City’s rolling new case rate per 100,000 residents is slightly higher. Health department officials are currently reevaluating their COVID alert system as they try to adapt to the changing pandemic climate. Learn more about that here.

COVID outbreak infections and hospitalizations across the state have risen as well, as the Columbia research would suggest, with the first up each of the last three weeks and the second up the last four. That time frame reflects the rise of BA.4./BA.5.

Both rates, though, remain overwhelmingly below their January 2022 peaks.

The other tri-states have been grappling with the latest COVID wave, too. New Jersey, which only had four high-risk counties in the CDC’s update last week, now have zero at low risk. A half-dozen are considered high risk by the CDC, mainly in the southern part of the state, while the rest of New Jersey is shaded yellow on the agency’s map.

Connecticut, meanwhile, is divided. The western part of the state — Fairfield, Litchfield, New Haven, and Middlesex counties — are listed as medium-risk for COVID spread by the CDC, while the eastern four counties were at low risk in Friday’s federal update.

Ramini Mozzarella in Tomales: See how buffalo mozzarella is made

Infrastructure Updates on Quad to Impact Some Walkways