Candidates clash in debate over policing at Mass. and Cass 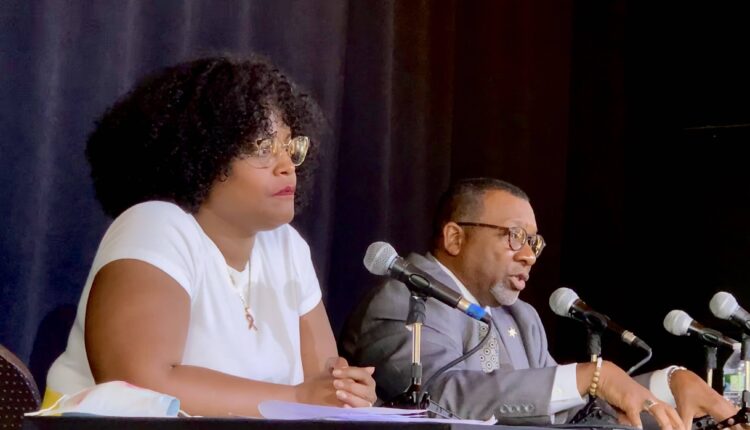 About seven weeks ahead of Massachusetts’ primary election, candidates presented different approaches to tackle a crisis of mental health, substance use disorders and criminal activity in the area of ​​Massachusetts Avenue and Melnea Cass Boulevard, also called Mass. and Cass.

Candidates for the state Senate 2nd Suffolk District, Suffolk County sheriff and Suffolk County district attorney faced off at a debate Wednesday in Roxbury hosted by grassroots political organization Boston’s Communities of Color. Throughout roughly four hours of debates, candidates primarily focused — and clashed — on the roles of the police, prisons and incarceration should play for those living in the long-embattled neighborhood.

During the district attorney candidates’ debate, incumbent Suffolk County District Attorney Kevin Hayden proposed the expansion of programs to assist people arrested on non-violent charges, while cracking down on predators.

Earlier this year, Hayden’s office allocated $400,000 in funds seized from drug-related convictions toward Services Over Sentences, a program designed to provide an alternative to prosecution for those convicted of “low-level offenses” at Mass. and Cass. The district attorney’s office will distinguish what constitutes a “low-level offense” on a case-by-case basis, Hayden said.

District attorney candidate and current Boston City Councilor Ricardo Arroyo argued that incarceration has historically been a roadblock to recovery, citing a 2016 study from the Massachusetts Department of Health that found that people who receive involuntary treatment are 2.2 times more likely to die of opioid-related overdoses than people who voluntarily seek treatment.

“When you try to rehabilitate folks with the threat of jail or a conviction, it is incredibly ineffective,” Arroyo said. “They say it’s voluntary, but then there are no beds for rehabilitation or mental health, and you end up on a waiting list at the jail, which creates a backlog in our prisons, and you create a situation where they are on probation.”

Arroyo, who has called for reallocation of funds for police into community-based services and public health resources, said funds spent on police overtime and patrols at Mass. and Cass over the past five years alone “is money that could have gone to rehabilitation centers or treatment beds and that would have had a better impact,” Arroyo said. “This is a system that has had rapid overtime fraud repeatedly over the course of the last few decades.”

Hayden did not agree with the idea of ​​removing funding from the police department, offering instead that additional funding be provided to improve issues within the police department and create programs like community policing, integrity reviews or community outreach. “I think that’s perfectly OK,” Hayden said. “But just to defund them I don’t think is an answer or a solution. I don’t think that’s ever, ever helped.” The candidates for Suffolk County sheriff clashed over a proposal to convert the empty Suffolk County House of Correction, a former ICE detention facility, into temporary housing for people experiencing homelessness in the area. Initially pitched last year, the plan would utilize Section 35, a state law that allows someone to be civilly committed and treated involuntarily for an alcohol or substance use disorder.

“For anyone to say that we were trying to criminalize the situation, not only is that wrong, it’s negligent,” said Sheriff Steve Tompkins. “What do we do? Do we just let people die on the street?”

Tompkins, a nine-year incumbent, faces a primary challenge from activist and former Sheriff’s Department employee Sandy Zamor Calixte, who argued that the office should focus on building relationships with mental health and housing agencies. The former detention facility could be transformed, she said, without “going back in the direction of locking people up” and leaning on a system of incarceration.

“What’s negligent is the fact that there’s a building that could be used … and the only proposal is another lockup,” Calixte said. “We need to get rid of the mentality of locking people up, first and foremost.”

Because people with mental health issues are overrepresented in jails and prisons and incarceration can exacerbate depression and other mental health conditions, Calixte said state officials have a responsibility to provide cognitive behavioral therapy and a pathway to housing for those who are incarcerated.

“If we want to make sure people are successful when they come back to the community, that means leveraging our relationships with agencies and creating a continuum of care,” Calixte said. “We have to tackle education, we have to tackle mental health issues, and we have to tackle homelessness.”

Once people leave a carceral facility, “we are not mandated to do anything with them because we don’t have jurisdiction over them,” Tompkins said. “That said, this is not your grandfather’s correctional facility anymore. We have to do everything that we possibly can to strengthen people while they’re with us, and we’re doing that … but once they’ve left us, they’re out of our care.”

Tompkins was asked about four people who died last summer while seeking medical treatment at facilities overseen by his office. “The four people that passed away last summer, frankly, should not have been there, and it’s just a confluence of incidences that they died on our watch,” Tompkins said. “They died within 48 hours of coming to us, so they hadn’t even been there that long.”

“It wasn’t like we did anything untoward to help them along that path of expiring, they would have left. They would have passed wherever they were,” Tompkins said, speaking directly to an audience member who interrupted his answer to accuse him of lying about the circumstances surrounding the deaths.

In the final debate between state Senate candidates for the 2nd Suffolk District, State Rep. Liz Miranda pushed for increased funding for mental health and rehabilitation programs, calling out local activists who highlighted “a looming crisis” some eight years ago, “but sadly nobody listened,” Miranda said.

Former state Sen. Dianne Wilkerson emphasized decentralization of resources in an effort to improve the nearby neighborhoods for residents and businesses.

Attorney Miniard Culpepper agreed, adding that surrounding states should be involved in addressing the concentration of homelessness and substance use at Mass. and Cass.

“They come from New Hampshire, they come from Rhode Island,” Culpepper said. “We need to have a solution where everyone that is coming to Mass. and Cass to get high, everyone from those different communities need to participate in the solution.”

State Rep. Nika Elugardo pushed back on Culpepper, pushing for increases in housing stock across the city and citing her own personal experience as the child of two parents who struggled with substance use disorder and homelessness throughout the majority of her life.

‘So Rudderless’: A Couple’s Quest for Autism Treatment for Their Son Hits Repeated Obstacles

Mikel Jones says other programs tried to recruit him away from Syracuse. Why did he stay?