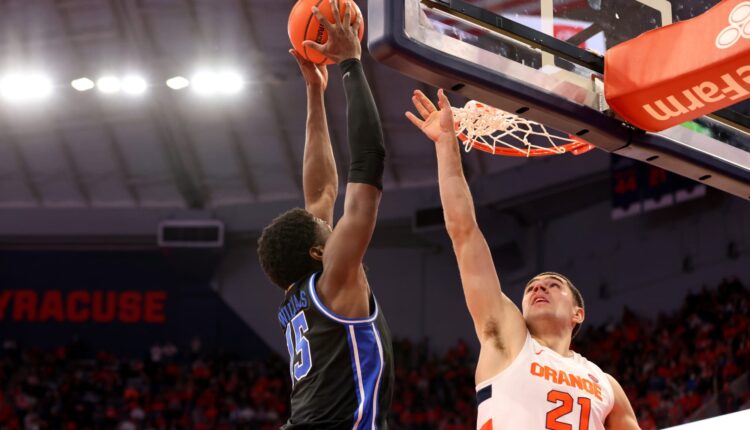 National analysts and other recruiting insiders have logged some predictions in the direction of two blue-blood programs for a pair of Syracuse basketball targets.

I always say to take these sorts of projections with a grain of salt, because the recruiting processes of top-flight players can ebb and flow.

At the same time, I believe these predictions are worth monitoring, as often – but not every single time – they do end up ringing true.

In this piece, we’re talking about Joseph Estrella, a fast-rising 2023 four-star big man who was offered by the Orange coaching staff nearly a year ago and has proven a top target for the ‘Cuse in the rising-senior cycle .

And the second Orange recruit that we’ll discuss here is Ian Jackson, a 2024 five-star guard who was offered a scholarship by Syracuse basketball in April and recently vaulted to the No. 1 national rating in his class, according to several recruiting services.

The 6-foot-11 Estrella is a power forward/center who runs with the New England-based Middlesex Magic in the Under Armor Association league on the AAU circuit.

Estrella, who has amassed more than two-dozen offers at this juncture in his recruiting process, will spend his senior year at the Brewster Academy in Wolfeboro, NH

When I penned this column, there were at least three predictions in the direction of Duke for Estrella on the 247Sports Web site. The Blue Devils also held a slight lead for him on the On3 Web site, according to that recruiting service’s recruiting prediction machine.

Shifting over to the 6-foot-6 Jackson, Kentucky is getting some analyst buzz in his recruitment these days, which is no surprise at all.

Jackson recently was on the USA Basketball U17 national team roster that captured the gold medal at the FIBA ​​U17 World Cup in Málaga, Spain.

He is a rising junior at Cardinal Hayes High School in the Bronx, NY, where he captured national sophomore of the year honors a stanza ago. In grassroots basketball, Jackson suits up for the Bronx, NY-based Wiz Kids in the Adidas league.

Not too long ago, Rivals.com installed Jackson as the new No. 1 player in the 2024 class. At the time of this writing, he was also No. 1 overall in this cycle according to the industry-generated On3 Consensus.

A prediction in Kentucky’s direction for Jackson recently came in on Rivals.com. There is at least one projection for Kentucky in Jackson’s recruiting process on the On3 website.

Last but not least, under Jackson’s bio on the 247Sports Web site, Kentucky and North Carolina are listed as having a “warm” interest level.

Foreclosure Starts Up in First Half of 2022