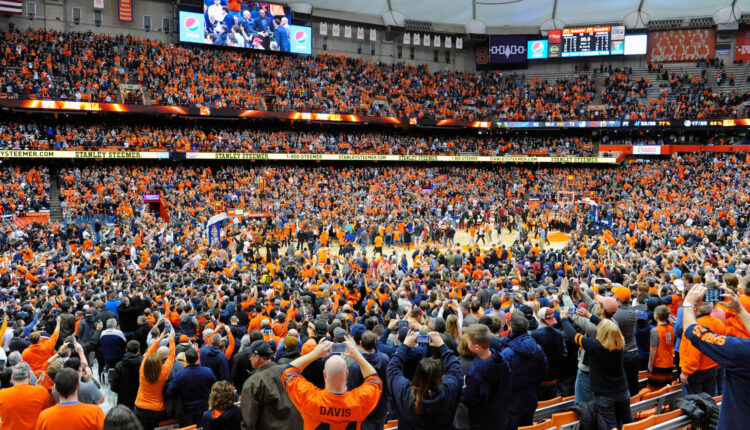 Five-star big man Ugonna Kingsley, who received a Syracuse basketball scholarship offer this past February, appears to be ready to make his college choice known in the near future.

Per a report from On3 national analyst Joe Tipton, the 7-foot center plans to reveal his commitment announcement on Monday, August 1. Tipton and others have recently reported that Kingsley is expected to reclassify from the 2023 cycle into the 2022 class.

Ugonna Kingsley tells me he will announce his college decision on Monday, August 1st.

Recently reclassified to 2022. One of the top big men in the country.

According to media reports and recruiting services, Kingsley recently has taken official visits to Kentucky, Oklahoma and Oklahoma State. Not surprisingly, numerous analysts are giving the Wildcats a good amount of buzz for Kingsley on various recruiting web sites.

When I penned this column on Tuesday, at least six predictions had come in for Kentucky in Kingsley’s recruitment between the 247Sports Web site, Rivals.com and the On3 Web site.

Syracuse basketball, to be fair, already has several big men in its 2022 class.

Kingsley’s decision to move to the 2022 cycle, at least to me, made it virtually impossible for the Orange to win out here, and I don’t pretend to know if Syracuse basketball was firmly in the mix even before this reclassification for Kingsley.

While the ‘Cuse does have one scholarship available ahead of the 2022-23 campaign, the team also possesses a couple of young big men who are incoming freshmen, along with center Mounir Hima, who transferred in from Duquesne and has three years of eligibility remaining .

Most recently, Kingsley attended the powerhouse Putnam Science Academy in Putnam, Conn., and on the AAU circuit, he is affiliated with the Team New England Basketball Club as well as the NY Jayhawks in the Adidas-sponsored league.

Kingsley has proven one of the hottest prospects nationwide in recent months. Not too long ago, he vaulted into the top-five overall, according to On3, although I believe that this new ranking was for the 2023 class. The industry-generated On3 Consensus has also placed Kingsley in the top-20 nationally in 2023.

I had hoped that the Orange would end up a serious contender for Kingsley. Back in mid-May, we noted that a report said Syracuse basketball coaches were recruiting the talented big man at a consistent pace.

It looks like Kentucky may prevail in Kingsley’s recruitment, and whichever squad lands him will be getting one heck of a high-school player who boasts tons of upside.