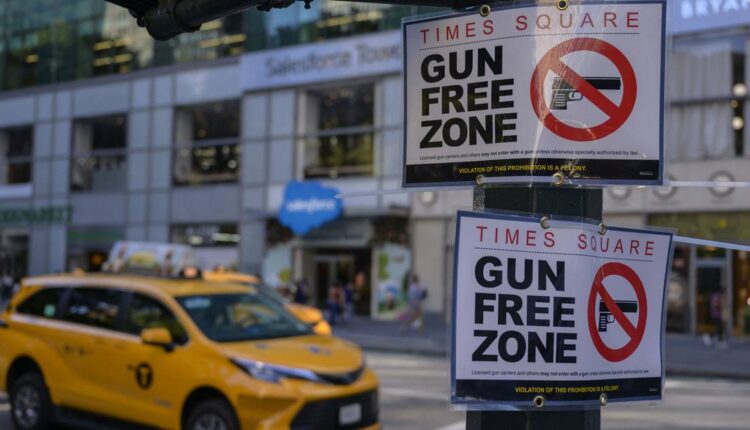 In a brief ruling, the country’s highest court denied an emergency motion by opponents who had filed challenges to the law, arguing it violated their constitutional right to bear arms.

Gov. Hochul and lawmakers drafted the new law banning gun owners from carrying firearms in a large number of public places and tightened the state’s licensing process after the Supreme Court overturned a 100-year-old Empire State statute that restricted who may carry a concealed handgun in public.

“The safety of New Yorkers is my top priority. I am pleased that this Supreme Court order will allow us to continue enforcing the gun laws that we have introduced to that end,” the governor said in a statement. “We believe these thoughtful, common-sense regulations will help prevent gun violence, and we will continue to work with the New York City Attorney’s Office to protect the laws.”

The Democrat-led Hochul and New York legislatures held a special session last summer to approve new rules restricting where legal guns can be carried and requiring those seeking permits to carry a demonstrate “good moral character”.

Applicants for a concealed carry permit must also provide names and contact information of family members, partners, and roommates, and a list of social media accounts for the past three years.

The new law designates “sensitive places” like Times Square, schools, parks and hospitals as gun-free zones and bans concealed weapons in private businesses unless a sign is posted saying armed customers are welcome.

The law, which went into effect last September, has led to several lawsuits from gun rights groups and New Yorkers who argue that the licensing rules are too restrictive and that gun-free zones are unconstitutional.

A police officer stands guard during a demonstration by victims of gun violence outside the Supreme Court as litigation begins in a major gun rights case on November 3, 2021 in Washington, DC. (Joshua Roberts/Getty Images)

The case, which the Supreme Court weighed on Wednesday, is currently before the 2nd Circuit Court of Appeals.

Portions of the law have been temporarily suspended and reinstated several times by lower courts.

Attorney General Letitia James said she believes the state has the right to “take common sense measures to protect our communities” as she welcomed the Supreme Court’s decision not to intervene at this time.

“Too many New Yorkers are plagued by gun violence, and we know basic gun laws help save lives every day,” she added.

Going Home: Bills’ Hamlin has been discharged from Buffalo Hospital

Scott A. Walker of Holbrook charged with fatally injuring dog and threatening owner